Ripple is among the best-performing cryptocurrencies in the market. The Easter Bunny must have been the esteemed guest in the XRP community. For several weeks, Ripple had tried to clear the resistance at $0.6 but failed to make a real break. The upswing has proved that Ripple is capable of a bull run despite the ongoing lawsuit filed by the United States Securities and Exchange Commission (SEC).

At the time of writing, Ripple is trading at $0.87 while bulls look forward to lifting above $0.9. Higher support, preferably above $0.8, may trigger massive gains toward $1. The uptrend is confirmed by the Moving Average Convergence Divergence (MACD). The MACD line (blue) has made an enormous gap from the signal line, suggesting that the slightest resistance path is still upward. 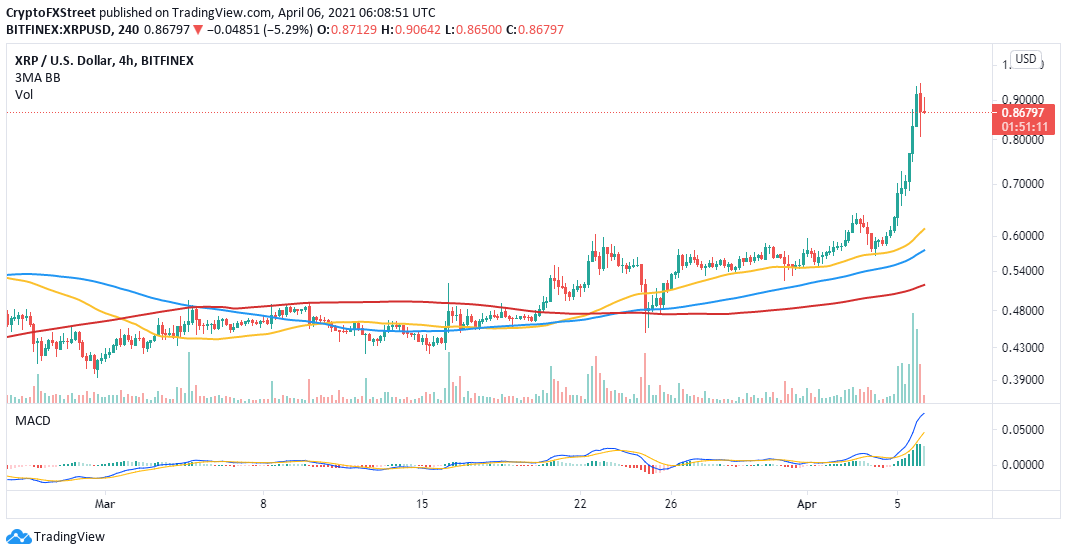 The Parabolic SAR points have reinforced the bullish outlook as they persistently follow the price action and holding below XRP. As long as the parabolas (dots) remain under the price, Ripple will continue with the rally.

An uptick in the 24-hour active addresses, as highlighted by Santiment, cements the bullish action in the market. The number of addresses interacting on the network has increased massively from 12,370 posted on April 5 to roughly 33,417 at the time of writing. The surge in active addresses implies that the speculation level has gone high. Sustaining this level of network activity is a bullish signal.

Looking at the other side of fence

The TD Sequential indicator on the four-hour chart insinuates that bulls could gradually lose grip. The indicator recently flashed a sell signal in the form of a green nine candlestick. If validated, the upswing back to highs beyond $0.9 will be invalidated. On the downside, XRP is likely to drop by one to four candlesticks, marking the beginning of a considerable correction.

Santiment shows a massive increase in Ripple-related social mentions. The social volume metric explores thousands of social channels for an asset's comments. As the volume spikes, investor sentiment improves, which leads to an increase in the token's value.