Ripple appears to have embraced support above $1.3 following the retreat from $1.6. The move hints at a potential recovery in the near term. Meanwhile, the price teeters at $1.44 at the time of writing as bulls battle the hurdle at $1.45. If Ripple makes a four-hour candlestick close, the uptrend will most likely be asserted.

Ripple could start building the uptrend to $2

The four-hour chart shows Ripple trading above the support at the 100 Simple Moving Average (SMA). Marginally above the prevailing market value, the cross-border token deals with the resistance at the 100 SMA.

Amidst the resistance and support, XRP also trades within the confines of an ascending parallel channel. The lower boundary contributed to anchoring Ripple’s downside. However, bulls must brace for more resistance at the channel’s middle layer.

In other words, trading above the mentioned resistance would pave the way for gains heading to $2. However, if the critical support caves in, XRP will extend the bearish leg toward $1. 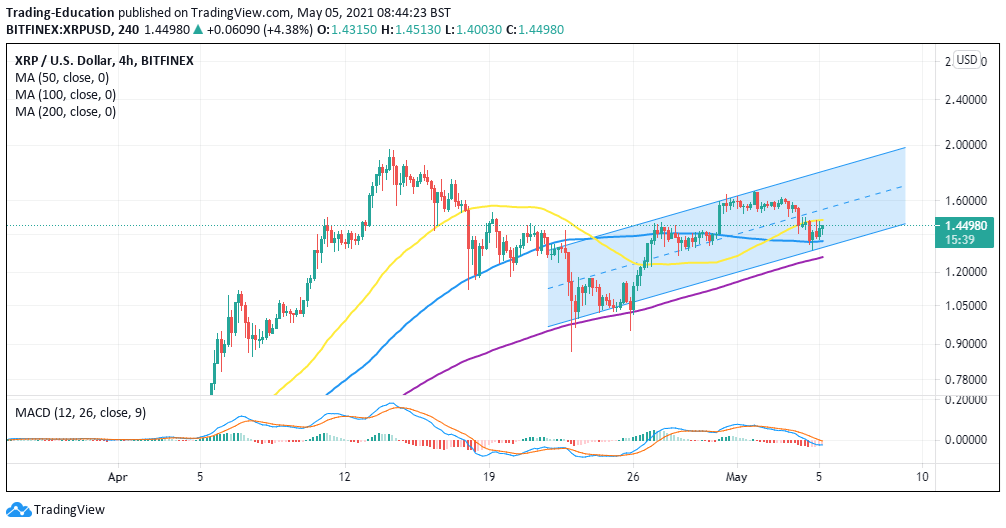 It is essential to realize that the Moving Average Convergence Divergence (MACD) is yet to reclaim the position above the mean line (0.00). Besides, the MACD line (blue) still holds beneath the signal line, and the bearish advances cannot be ignored.

The market value realized value (MVRV) on-chain analysis tool by Santiment shows that Ripple is heading back into the buy zone. According to Santiment, this model tracks the average profit or loss of the investors holding XRP tokens which moved in the last 30 days, compared to the price when each of the tokens last moved.

The MVRV can go high or low for every asset. A high ratio indicates that holders are in profit and therefore could consider taking profit, thus increasing overhead pressure.

On the other hand, a low MVRV ratio suggests that Ripple’s investors are at a loss or yet to break even; hence are unlikely to sell. A low MVRV ratio is a massive bullish signal; for instance, at 1.8%, XRP is likely to experience reduced overhead pressure, allowing for recovery.