Ripple Price Needs To Reclaim This Crucial Support Or Risk Freefall To $0.48

Ripple price ran for $0.65 following a drop to $0.61 on Monday. However, an immediate correction saw XRP lose the accrued gains. This time, support at $0.61 did little to protect the downside, allowing the cross-border money transfer token to explore the area slightly below $0.6.

At the time of writing, XRP teeters at $0.596 amid a fierce battle by the bulls to ensure the uptrend resumes. It is essential to take note of the confirmed breakout from the descending triangle pattern on the four-hour. Hence, the Ripple price is not done with the downtrend, which could be extended to $0.48.

The formation of a descending triangle pattern brings into perspective the possibility of a more prolonged downtrend. This pattern is highly bearish and often leads to the continuation of the preceding trend. Therefore, XRP may drop 25% to test support at $0.48 before starting to gain ground. 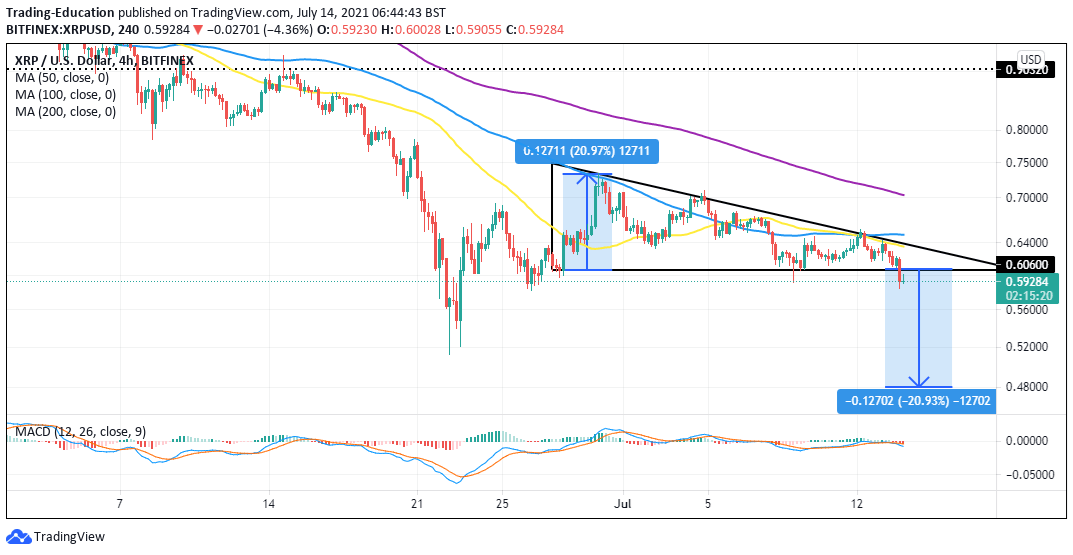 A death cross pattern on the same four-hour chart strengthens the bearish grip. As the 50 Simple Moving Average (SMA) crossed below the 100 SMA, the odds for another downswing shot up. In other words, Ripple is more likely to approach $0.55 than $0.65 in the near term.

The bearish narrative is accentuated by a call to sell from the Moving Average Convergence Divergence (MACD) indicator. This technical tool follows the trend of Ripple and calculates the momentum. Traders can reinforce the validity of either an uptrend or a downtrend using the MACD.

For instance, as the 12-day exponential moving average (EMA) crossed beneath the 26-day moving average, a sell signal came into the picture. Moreover, the MACD seems to be exploring the negative territory, adding credence to the bearish outlook. It is imperative to conclude the Ripple’s relationship with the ongoing downward action is far from over.

Looking At The Other Side Of The Fence

As mentioned, Ripple is trading around $0.59 and showing some semblance of stability. Hence, the bulls’ effort to avoid further losses should not be ignored. It is worth keeping in mind that a break above $0.6 will invalidate the call to $0.48, at least for now. At the same time, more buyers will leave the sidelines for the stage as they speculate an ultimate liftoff to $0.7.