Cryptocurrencies are becoming increasingly popular, with investors looking beyond Bitcoin and investing in other cryptocurrencies. Ripple, along with Bitcoin, Ethereum, and Tether, is one of the cryptocurrency space leaders. Ripple is poised to become a vital investment asset and with cryptocurrencies set to experience a bullish phase in 2021, let us take a look at the Ripple Price Prediction, both over the short-term and the long-term.

Today, over 100 companies worldwide have partnered with Ripple, using the platform for its fast and frictionless transactions. XRP, Ripple's native cryptocurrency, is the third-largest currency in terms of market capitalization.

XRP's primary function is to provide liquidity to banks and facilitate cross-border transactions, although individuals can also buy XRP. All XRP tokens are pre-mined, and Ripple Lab controls when new coins are released. There are 39 billion XRP in circulation, and Ripple Lab periodically releases new coins to maintain circulation.

Transactions on the Ripple platform are not limited to XRP. The platform also supports traditional currencies like the Dollar, Euro, Yen, Pound, and other cryptocurrencies. Ripple acts as a facilitator for currency exchanges and also as a payment processor. Ripple brings blockchain technology to the cross-border payment industry, competing with platforms like Swift and ACH.

Ripple entered the market at $0.0058 and maintained this price. Ripple's price saw movement in March 2017 when the coin jumped to $0.03. The cryptocurrency further rose to $0.2 in May. This jump in price was fueled by the news of Ripple partnering with the Bank of Tokyo.

Ripple's price kept fluctuating for most of 2017 before going on an upward trajectory, in line with the growth of Bitcoin. Thanks to Bitcoin's rally in 2017, cryptocurrencies like Ripple also rallied. As a result, Ripple's price rose to $1 and crossed $3 in January 2018, almost crossing $3.50.

However, after this rally, Ripple witnessed a significant drop in value, falling to $0.07 before rising to $1 again. The currency fell to $0.5 in April and kept falling until the price stabilized at $0.26. The release of xRapid saw Ripple's price climb again. The cryptocurrency hovered around the $0.5 mark until November before falling to $0.28. Ripple staged another recovery in May, rising to $0.45. Currently, Ripple is trading at around $0.46. As per our Ripple Price Prediction, the value of XRP is stated to rise over the next few years. 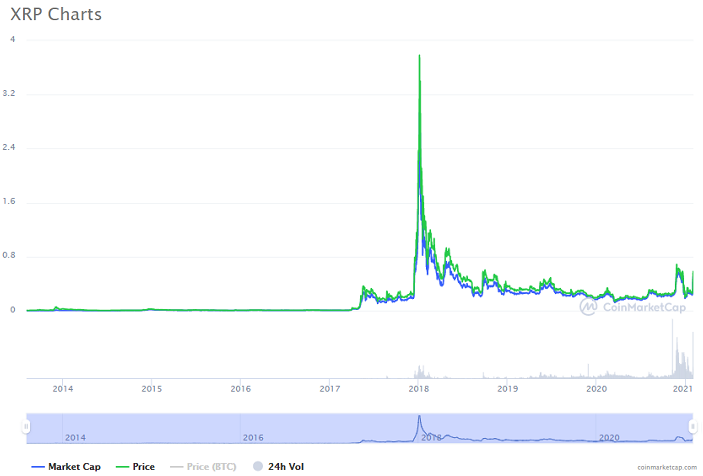 XRP has been relatively consistent over the past three months, with a couple of jumps in price.

This rally can be attributed to a crowd pump that GameStop experienced. Ripple's price jumped by 56%, fueled by members of a Telegram group called Buy & Hold. This jump in Ripple price has wiped out the losses sustained when the currency fell from $0.55 to $0.20. Currently, Ripple is trading at $0.46 and is expected to increase further.

Ripple has stated that it plans to create a payment system that banks can use to transfer funds internationally and domestically. Ripple has announced partnerships with several banks and financial institutions like JP Morgan, HSBC Holdings, Banco Santander, Mizuho Financial Group, and MoneyGram. HSBC Bank Limited also joined the Ripple network in August 2020.

Ripple has positioned itself as an alternative to the SWIFT payment system. The Official Monetary and Financial Institutions Forum (OMFIF) report states that DLT technology, on which XRP operates, could address key banking sector issues. The report also states that banks can replace SWIFT and instead use an XRP pool, making transactions efficient and quick.

Moody's has also stated that Ripple has a lot of plans in the offing. With the network entering into partnerships with more banks and financial institutions, experts believe that Ripple could rally from its current price level of $1.46 to the $2 mark in 2021.

Read Also: What Will Drive The Ripple XRP Price in 2021?

Ripple is expected to see an increase in value during 2023. The Ripple team has quite a few projects that will see the light of day in 2023. The network is also set to partner with more financial institutions and hopes to see considerable mainstream adoption in 2023. This could push the price of XRP higher than it has ever been, with experts predicting that by 2023 the currency could reach $5.

As per our analysis and the Ripple price prediction, XRP could be pushing the $7 mark in 2024. Crypto experts believe that XRP could see significant adoption in 2024. Some experts have predicted that if XRP adoption occurs at expected levels, we could see the cryptocurrency go on a bull run, and Ripple's price could rise even further.

Ripple's price prediction for 2025 is pretty optimistic, with experts predicting that XRP will hover between the $10-$12 vicinity. Most predictions state that the value will be somewhere around $10 for most of 2025.

Ripple's mass adoption could see the cryptocurrency become an affordable investment asset that could further increase in value. Ripple has plans to partner with major European and Latin American banks, promoting both Ripple and XRP. This could lead to a significant increase in the price of XRP.

2030 will see Ripple register significant growth, thanks to increased adoption and greater use cases. XRP's long term price prediction states that the currency might reach $25 by 2030.

Investment Haven has a bullish price prediction for Ripple. The platform claims that Ripple could hit $20 in the near future if XRP sees adoption by banks and other financial institutions.

Ripple Coin News's price prediction states that Ripple's price will be stable during 2021-2022. Ripple's partnerships with financial institutions and banks will push its price to $10 by 2025.

Moody's Ripple Price Prediction states that due to Ripple's partnerships with financial institutions, Ripple and technology will see greater adoption, which will push its price higher. Moody's predicts that that XRP could go up to $3 by 2021.

Oracle Times prediction states that Ripple could rise by as much as 2000%. However, they state that this growth type is only possible if Ripple was the best option for cross-border payments.

Most Ripple predictions have put an upper limit of $10 on the price of Ripple. However, a price of $5 is more realistic, which is a 15x ROI on investment.

Read More: How Much Will Ripple Be Worth In 2021 And Beyond?

Most Ripple price predictions have stated that the cryptocurrency is expected to remain stable over the short-term and the long-term.

With Ripple tying up with more financial institutions and banks globally, it is bound to see an increase in adoption and use cases. This is significant as it could push the price of XRP higher.

Ripple is a reasonably safe investment at the moment, and investors can enter the market and make a potential profit on their investments.

eToro – The Best Platform To Invest In Ripple XRP

Ripple is an open-source protocol released in 2012. Chris Larsen and Jeb McCaleb founded it. Ripple allows users to transfer funds in the form of cryptocurrencies or traditional fiat currencies. Ripple is a decentralized platform, so there is no central authority governing the platform or setting the platform's rules, and it has positioned itself as an alternative to SWIFT for cross-border transactions.

RippleNet is Ripple's currency exchange and remittance system. It helps to carry out cross-border payments securely and without any friction. Ripple has partnered with over 200 banks, financial institutions, and payment processors, making Ripple among the world's most accessible payments network. These partnerships are critical to the adoption of RippleNet. Some of the major financial institutions that Ripple has partnered with are:

What Are The Differences Between Ripple And XRP?

Ripple is the company providing solutions for cross-border transactions through its payment network RippleNet. XRP is a digital asset, it was created independently from Ripple. The technology behind XRP is the XRP ledger.

What Is XRP, And How Can I Trade It?

XRP is a decentralized digital asset made for payment systems. You can trade XRP in over 100 exchanges globally.

Why Is XRP's Price So Volatile?

XRP, like any other asset, faces volatility in its price due to the prevailing market conditions. These conditions can change at any moment, and this is reflected in the price fluctuation of FRP.

What Is On-Demand Liquidity?

On-Demand liquidity lets RippleNet users leverage XRP to bridge currencies. This ensures that payments are done quickly and are sent/received in the local currency. XRP is ideal for cross-border payments as it is quicker, cheaper, and more scalable than other digital assets.

How to Invest in Ripple 2021: The Ultimate Beginner’s Guide to Investing in XRP