Between May 13 and May 18 the Ripple price jumped from $1.26 to $1.60 - gaining more than $0.30 in its overall valuation. However, the bears took control this Wednesday and instantly negated all the hard work that the buyers have done over the last 5 days.

So far this Wednesday, the bears have taken complete control of the market and crashed the price from $1.60 to $1.25. During this downward plunge, XRP flipped the 20-day and 50-day SMAs from support to resistance. The MACD shows increasing bearish momentum, while the expanding Bollinger Band shows increasing volatility. As such, expect a further downtrend in the near future.

In the 4-hour Ripple price chart, XRP has failed at the $1.67 resistance barrier and crashed down to $1.27. In fact, the bearish wick reached almost $1.10. During this downward trend, Ripple had:

Plus, the the relative strength index (RSI) shows that XRP may dip some more before it gets underpriced.

However, the SEC has now filed their papers, further fighting the motion to intervene. In the filing, the SEC requested to not allow six individuals, including the instigator of the motion (Deaton), to intervene. Jordan Deaton, James Lamonte, Tyler Lamonte, Mya Lamonte, Mitchell McKenna, and Kristiana Warner were asked not to participate in the lawsuit as third-party defendants.

The SEC claimed that the six named individuals do not fall under “amici curiae,” which is Latin for “friend of the court.” Instead, if allowed to participate in proceedings, the SEC said the six would act as friends of the Defendant. They further claim that the XRP holders will not provide any new information to the court. Plus, their vested interest in Ripple will bias any evidence they present.

By allowing their participation, the SEC argued that the scope of the case changes from what the enforcement action intends.

As this enforcement action does not charge any individual investors in the secondary market who purchased XRP, Movants’ participation in this case — whether as intervenors or as amici — would expand the scope of this case to claims the SEC is not bringing.

To counter the SEC’s lawsuit, XRP holders want to state their case. In their motion to intervene filed last month, XRP holders said that they wish to participate in protecting their interests. They do not assert any claims or counterclaims against the regulators.

According to Deaton, the SEC has not shown any consideration for the investors they claim they are protecting. The XRP holders collectively seek intervention to have their voices heard on the matter. 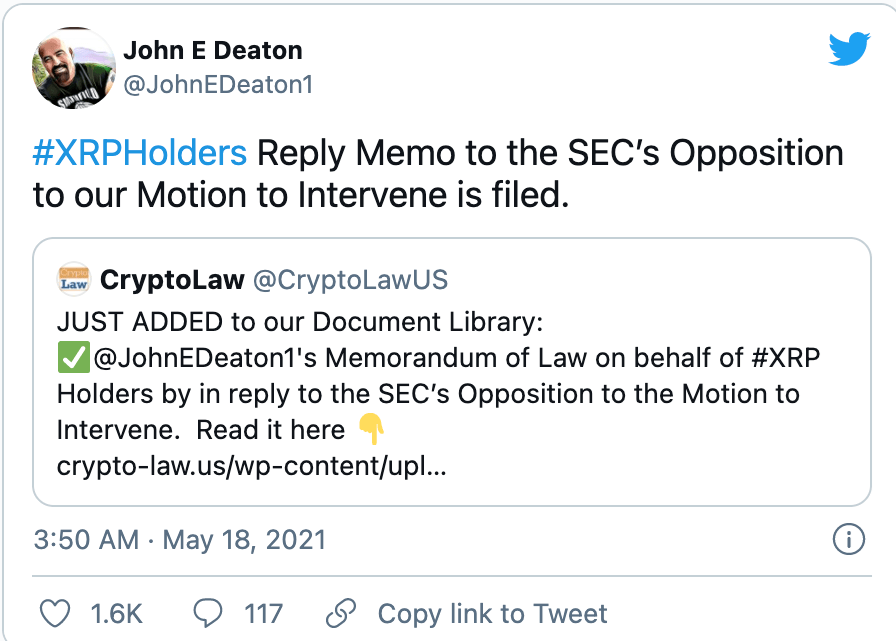 Down, down and more down. The way things stand with Ripple’s technical outlook, it could possibly drop all the way down to the 200-day SMA ($0.70).