Ripple has been trending horizontally over the last ten days. With the bulls and bears playing a tug-of-war for control, the Ripple price has not gone through any wild price swings. Let’s take a closer look with technical analysis.

The MACD in the 4-hour chart has been flipping between the buyers and sellers over the last four days. This again shows that the bulls and bears are engaged in a tug of war for market control.

Ripple co-founder Jed McCaleb has recently sold 28.6 million XRP tokens (worth $8.78 million) after halting his sales for 25 days. McCaleb was granted these tokens for co-founding the company.

McCaleb began working on Ripple in 2011. When he left the company in 2014, he was awarded 8 billion XRP tokens for his role in developing and founding OpenCoin, which was later rebranded to Ripple. He has received the funds on a fixed schedule.

Earlier on XRP Talk (a forum for XRP investors and proponents), McCaleb had said that he donated a part of his tokens to charities such as Give Directly and Literacy Bridge. He added that he intends to sell the rest of his holdings. Since then, he has been periodically selling XRP. Researcher Leonidas Hadjiloizou spotted the most recent sale. 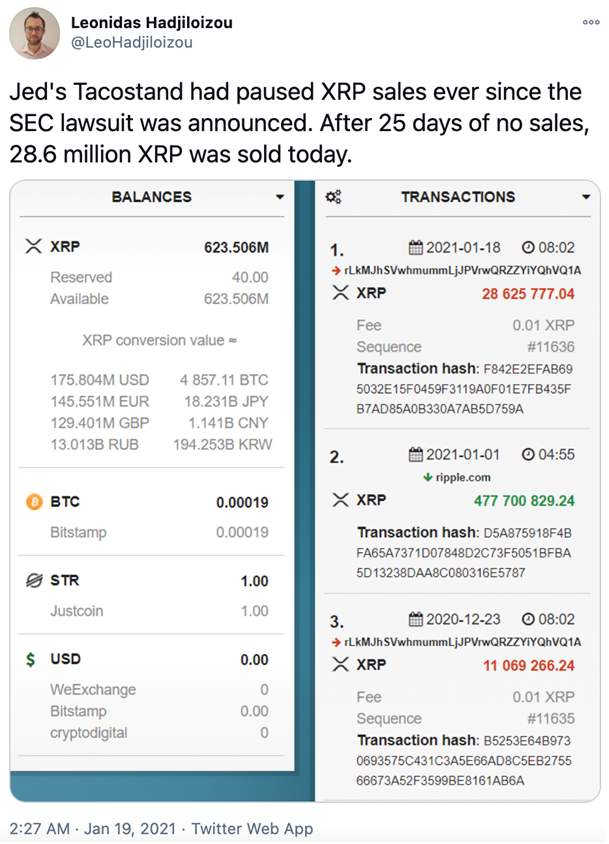 His 25-day pause may have been related to the US Securities and Exchange Commission’s (SEC) lawsuit against Ripple and its other co-founders - Brad Garlinghouse and Chris Larsen. The commission has alleged the aforementioned entities of raising over $1.3 billion by selling XRP tokens as unregistered securities.

XRP is going to keep trending horizontally until it breaks above the 200-day SMA or the 20-day SMA.