The Ripple price continued on a downward trajectory, as the price continued to fall during the current session. XRP had flipped to bearish on Sunday when it dropped by over 2% before posting a marginal recovery on Monday. However, XRP found itself back in the red on Tuesday when it dropped by over 3% to settle at $1.09, with the 50-day SMA acting as support. The current session sees sellers trying to push the price further down. Whether they can push the price below the 50-day SMA remains to be seen.

The Ripple price has turned bearish after a strong start to October, increasing by over 9%, pushing above the 200-day and 20-day SMAs to settle at $1.04. Despite a marginal fall on Saturday, the price was back in the green on Sunday, as the price rose to $1.05. Monday saw XRP register another marginal fall before rising by over 4% on Tuesday and settling at $1.08. After Tuesday, the price fell into the red again, registering a marginal drop Wednesday, with the price continuing to be in the red until Friday. 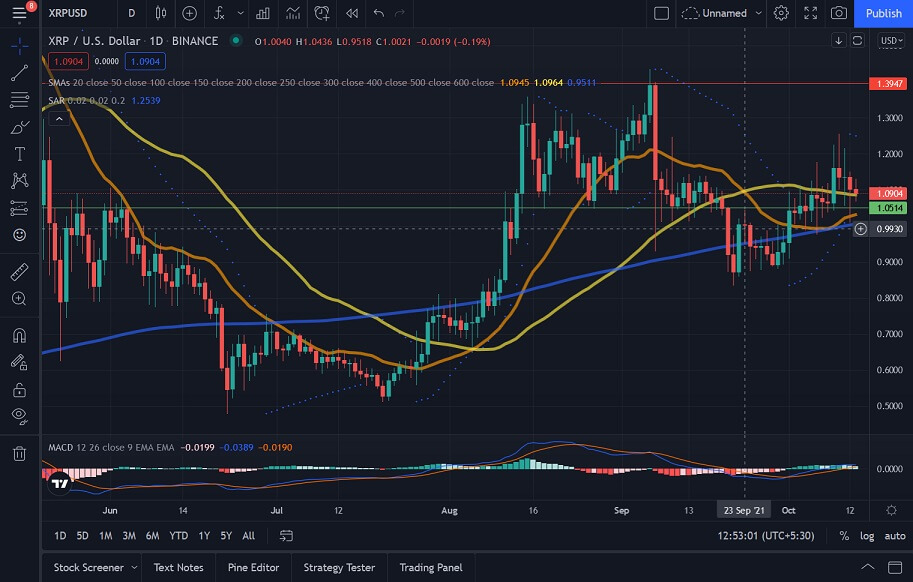 The Ripple price continued to be bearish for the remainder of the week, ending Friday at $1.06 before posting a solid recovery on Saturday. On Saturday, the price rose by 9.11% as XRP rose to $1.16 while also pushing past the 50-day SMA. However, the price turned bearish on Sunday as it registered a fall of over 2% to drop to $1.13. Monday did not see any movement, but XRP fell again on Tuesday, dropping to $1.10 and settling just above the 50-day SMA. The current session sees sellers trying to push the price below the 50-day SMA, and while the Parabolic SAR has already flipped to bearish, if the price continues to fall, we could see the MACD flip to bearish as well. 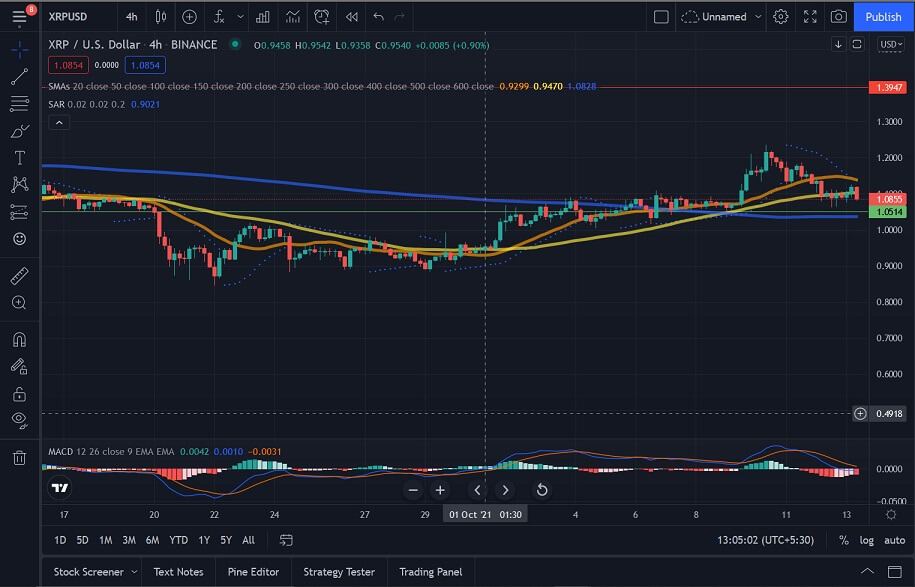 The 4-hour Ripple price chart shows us that XRP was fairly flat until the 9th, sticking close to the 20-bar SMA. However, XRP rose significantly on the 9th, pushing up to $1.10 and then $1.16. After a marginal drop, XRP pushed up again, rising to $1.21 before dropping to $1.13, where the 20-bar SMA acted as support and pushed the price back up to $1.17. However, XRP could not maintain this level, as it dropped to $1.09, slipping below the 20-bar SMA. Currently, we see that XRP is at $1.08, and with the Parabolic SAR and MACD both bearish, we could see the price fall even further.

Per a press release, projects funded by the initiative could offset more than 1.5 million tons of carbon dioxide over 35 years. Though it is not clear exactly how much Ripple will contribute, the firm will contribute most of the funding.

Ripple’s Head of Social Impact, Ken Weber, called clean energy a “major priority across every industry.” He noted that clean energy technology will become important “as the adoption of cryptocurrencies and blockchain continues to grow.”

The press release noted that this is not Ripple’s first clean energy initiative. The firm is also part of the Crypto Climate Accord, and in 2020 it partnered with Energy Web and the Rocky Mountain Institute to decarbonize the XRP Ledger. It aims to become carbon net-zero by 2030 through its investments and activities.

Looking at the Ripple price chart, it is clear that XRP has taken a bearish turn. With sellers in control of the current session, it remains to be seen if they can pierce the support at $1.08. If they are successful, then XRP could drop to the 20-day SMA at $1.03.