On March 25, the Ripple price found support at the 50-day SMA and was valued at around $0.48. Since then, XRP had been trending relatively horizontally, before the buyers took charge of the price and pushed it back above $1, for the first time since May 2018. However, the sellers have retaken control.

Prior to this Wednesday, the relative strength index (RSI) of Ripple price had shot into the overbought zone, which tells us that XRP was overvalued. This led to an inevitable bearish correction, as XRP fell to $0.88, more than negative Tuesday’s gains. The TD sequential detector tells us that Ripple is about to flash a sell signal in the form of a green-nine candlestick in the TD sequential detector. This could prompt a further drop in XRP price.

Looking at the 4-hour Ripple price chart, we can see that XRP has already flashed three different sell signals: 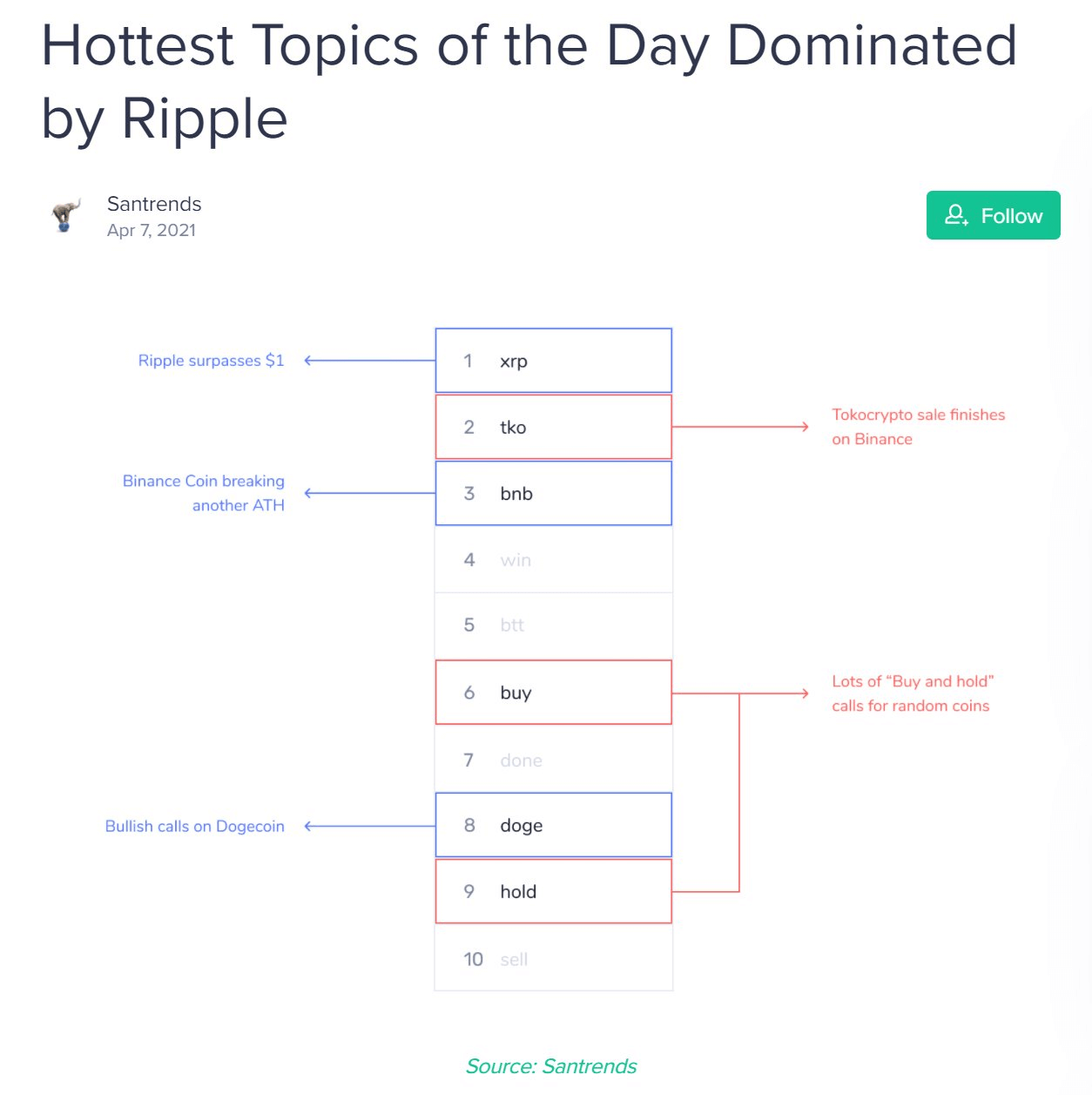 As per Santiment Social Trends, Ripple dominated the conversation in social media. The on-chain platform tweeted:

US Magistrate Judge Sarah Netburn has permitted Ripple to access the US Securities and Exchange Commission’s (SEC) documents “expressing the agency’s interpretation or views” on the matter of digital assets.

According to Law360, Judge Sarah Netburn granted the defendants’ motion “in large part,” settling that SEC memos about crypto are likely discoverable. Netburn clarified that SEC need not produce staff-to-staff email communications. She also allowed the SEC and Ripple to raise disputes with the ruling.

In December, the SEC filed a lawsuit against Ripple and its CEO Brad Garlinghouse and chairman Christian Larsen for selling XRP as unregistered securities. Ripple challenged the SEC’s suit and claimed that XRP is similar to Bitcoin or Ether. The SEC has classified the latter two assets as commodities.

Law360 reported that Garlinghouse’s counsel, Matthew Solomon, believes it may be “game over” for the suit if they find evidence the regulator has deemed XRP akin to BTC or ETH.

Ripple's lawyers believe that they can undermine the SEC’s claims if they can produce documentation showing contradictory determinations about the commission's classification of XRP. Solomon said:

We need this discovery to defend ourselves.

However, SEC counsel Dugan Bliss criticized the defendants for seeking to put the commission “on trial” by scrutinizing its internal deliberations rather than defending its allegedly illicit actions.

The actions of the promoter are what need to be the focus here.