Ripple Price Prediction: XRP Could Tumble 62% Unless This Crucial Support Holds at all Costs

Ripple is stuck under $0.3, unable to push for gains due to the apparent overhead pressure. Losing the critical levels at $1.5 and $1.4 was detrimental to the uptrend and left the lower support area vulnerable. Meanwhile, XRP dances at $1.28 at the time of writing amid weakening technical levels.

The pattern is formed by connecting two or more relatively equal lows using a horizontal line. Similarly, a series of declining peaks make the descending trend line. The downtrend extends as soon as the price breaks below the horizontal line.

A breakdown should occur before the lines meet to conform the triangle. Note that breakdowns from the descending triangle have exact targets measured from the highest to lowest points, as illustrated on the chart. 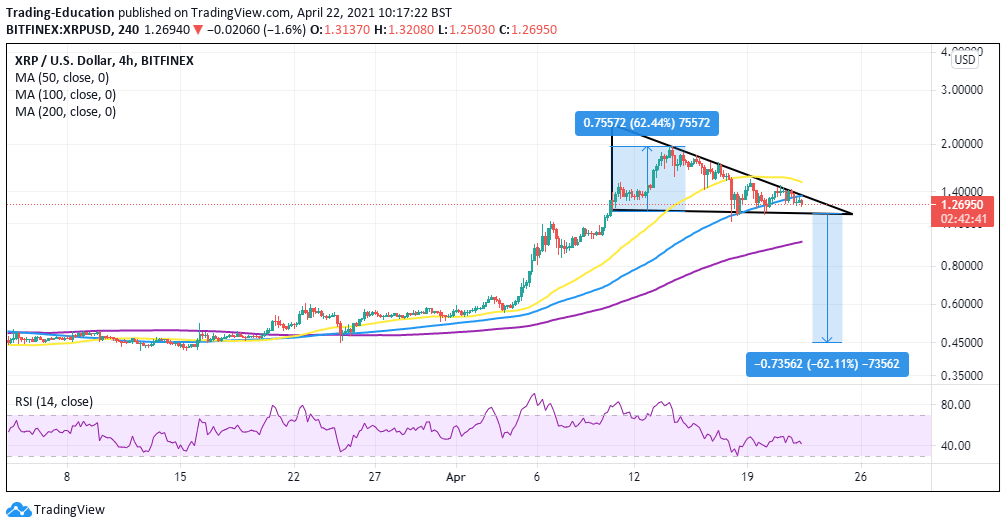 Ripple is likely to drop 62% to $0.45 if the triangle is confirmed. In the meantime, the short-term technical picture is bearish based on the rising resistance under the 100 Simple Moving Average (SMA). The bearish outlook has also been reinforced by the Relative Strength Index (RSI) on the four-hour chart.

The market value realized value (MVRV) on-chain model by Santiment reveals that Ripple’s downtrend may last longer. As the ratio resets toward zero, the price falls. The drop implies that investors in profit are selling, contributing to the gravitational force. Once the MVRV ratio is back to zero or below, investors are less likely to sell, leading to a significant recovery.

Ripple’s network growth on-chain metric by Santiment shows that new participants are still coming into the market despite the correction from $1.95. The number of newly-created addresses had dropped to around 7,200 on April 17 but currently stand at nearly 8,000.

The increase in the unique addresses shows that XRP gains traction, although gradually. Adoption leads to the growth of the token’s value and the project as a whole, hence the bullish signal.

From a technical perspective, holding firmly to the support at $1.12 would keep the bearish advances at bay. However, if this support is lost, we can expect Ripple to begin exploring levels under $1.