Ripple bowed to the heightened volatility in the market, succumbing to massive losses as predicted on Thursday. Resistance at $1.3 remained intact, with overhead pressure mounting on the support at $1.12.

A technical breakdown followed, whereby XRP extended the bearish leg under $1. Meanwhile, as overhead pressure rises, the cross-border token might drop to $0.08 and $0.45, respectively.

On Thursday, we brought to light a descending triangle. This bearish continuation pattern hinted at Ripple diving to $0.45. However, support at $1.12 appeared strong enough to keep the bearish advances at bay.

On the other hand, a bearish wave swept across the market during the American session on Thursday and spread throughout the Asian session.

The freefall across the board has been attributed to panic following rumors that the United States government considers doubling tax rates on capital gains. The US President, Joe Biden, seems to be championing stricter regulations in the cryptocurrency market.

At the time of writing, Ripple teeters at $0.98 after losing nearly 22% of its value over the last 24 hours. The approximately 5% declines on an hourly basis hint at the bearish outlook gaining momentum.

Following the breakdown at the triangle’s x-axis, the least resistance path is downward. Various technical indicators add sorrow to an already gloomy day. For example, the Moving Average Convergence Divergence (MACD) indicator has slipped into the negative region. Additionally, the MACD line widens the gap below the signal line, reinforcing the bearish outlook. 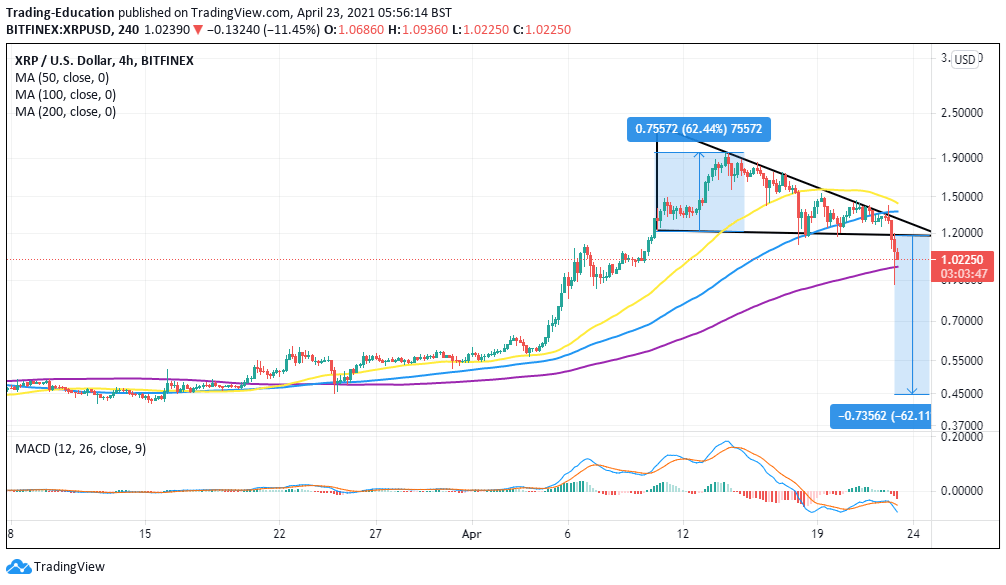 The bearish narrative has also been reflected in the number of active addresses reducing on the XRP Ledger over the last week. Network activity hit roughly 54,000 on April 14, marking a monthly high. However, over the previous few days, the addresses interacting on the network have slumped to approximately 27,350. A decrease of such magnitude suggests that speculation has tumbled. In other words, investors are withdrawn, which is a bearish signal.

It is worth mentioning that if support at the 200 Simple Moving Average (SMA) holds, some semblance of stability will return to the market. Moreover, the price action past $1 would call out buyers to join the market and stop watching from the sidelines. On the upside, XRP must reclaim support at $1.12 to secure the uptrend back to $1.5 and later $2.