Ripple price pulldown is becoming apparent with each passing day. Earlier this week, the token reversed the trend upward and stepped above $0.7. Nevertheless, the hope for trading above $0.8 died upon touching barriers around $0.74.

A correction occurred soon after, with the bearish leg extending below $0.65. At the time of writing, XRP trades at $0.65 amid the battle by the bulls to hold above the 50 Simple Moving Average (SMA) on the 12-hour chart.

Ripple price downswing in action toward $0.55

The cross-border money transfer token holds at the 50 SMA, support reinforced by the ascending parallel channel’s lower edge. Sustaining above this zone is essential for the resumption of the uptrend. However, several sell signals hint at the downtrend continuing toward $0.55.

The Moving Average Convergence Divergence (MACD) indicator adds credence to the pessimistic outlook. This technical indicator follows the path of a trend and calculates its momentum.

At the moment, the MACD has flipped bearish within the same time frame for the first time since mid-June. As the 12-day Exponential Moving Average crossed above the 26-day Exponential Moving Average, the odds for a bearish impulse amplified significantly. Moreover, the MACD is about to cross below the mean line, which will further cement the sellers’ position in the market. 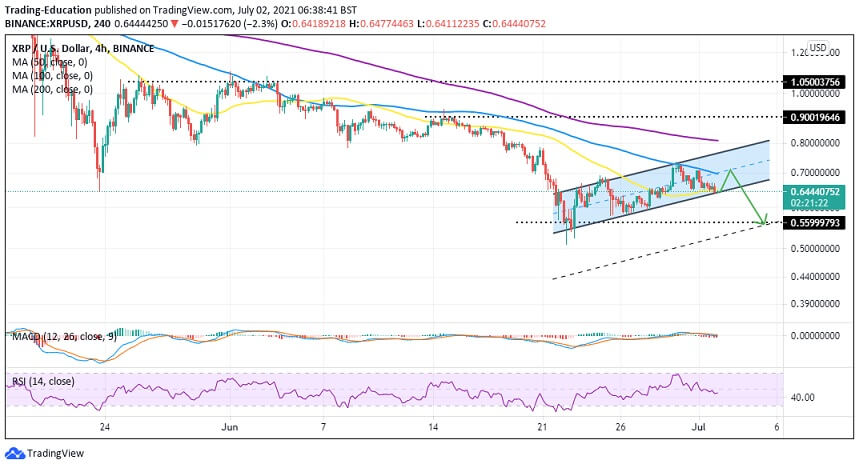 The Relative Strength Index (RSI) in the exact time frame appears to validate the increasing aggressiveness of the bears. A drop under the midline will add credibility to the downtrend. Note that closing the day below the 50 SMA and the ascending parallel channel could see Ripple price stretch to the next support at $0.55.

According to Santiment’s on-chain data, declining network growth is a massive bearish signal that may sabotage attempts for recovery, resulting in another downswing. The network growth model shows that nearly 2,200 addresses were created on the XRP Ledger on July 1, down from roughly 3,200 on June 28.

A low or declining network growth is usually a bearish signal, which pulls the token value down. Realize that the decrease suggests that the project is losing traction in adoption, which eventually affects the network, making it difficult to sustain the uptrend.