Ripple joined most cryptocurrencies as they retreated from the weekly highs. The flagship cross-border transfer token extended the bearish leg after hitting a $1.6. Tentative support 50 Simple Moving Average (SMA) on the 12-hour chart did little to anchor the token. XRP tested the support at $1.2 before assuming the ongoing gradual recovery.

Ripple bounces off support as bulls focus on $2

Ripple trades at $1.4 at the time of writing and after recovering from support at $1.2. The immediate upside is capped at the 50 Simple Moving Average (SMA). Trading above this level could bolster Ripple to stubborn resistance at $1.6.

The Relative Strength Index (RSI) is currently assuming a bullish outlook, as seen on the 12-hour chart. If it moves above the midline, the bullish grip will strengthen, allowing XRP to perhaps settle above the 50 SMA. This move will ensure that buyers stop playing defense and focus on sustaining an uptrend. 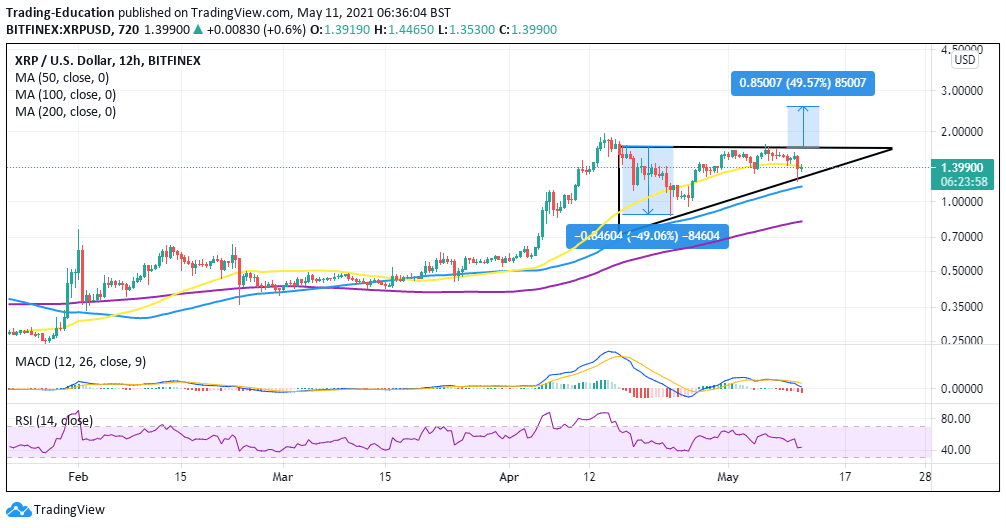 It is essential to realize that the Ripple trades within an ascending triangle. This is a technical continuation pattern that usually forms in an uptrend. It represents a period of consolidation before a breakout.

A breakout from the ascending triangle begins when the price strikes above the x-axis. The move is characterized by a spike in trading volume and has an exact target measured from the pattern’s highest to lowest points.

Ripple is in a buy zone according to the market value realized value (MVRV) on-chain model. For nearly a month, the profit or loss ratio has significantly gone from around 120% to -6%.

According to Santiment, this model shows the average profit or loss of the holders of XRP tokens moved over the last 30 days compared to the price when each of these tokens last moved. A high ratio suggests that most investors are at a profit and prefer to sell to take profit, which is a bearish signal.

However, a low or negative MVRV ratio shows investors are at a loss or are yet to break even. In other words, this means that investors are unlikely to sell; thus, they prefer to hold longer until the price recovers. This is a bullish signal because overhead pressure is reduced.

It is worth noting that recovery may not be a walk in the park based on the Moving Average Convergence Divergence (MACD). The bearish picture comes after the MACD line extended the divergence beneath the signal line.