Ripple Price Prediction: XRP Looks to Push Up From $1.10

The Ripple price had fallen below the 20-day SMA on 30th August after being pushed down from $1.19. However, XRP found support at around $1.10 and pushed back up to the end of August just above the 20-day SMA at $1.18. The start of September saw XRP push on even further, and by 3rd September, the price had reached $1.29. At this level, XRP saw the price drop to $1.25 before recovering in the subsequent session. XRP ended Sunday on a positive note, up by 4.23% to close at $1.30. 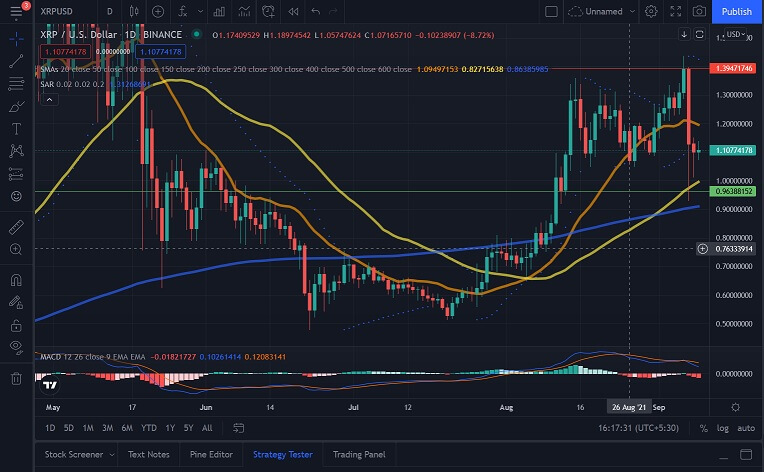 Looking at the 1-day Ripple price chart, we can see that XRP started the week positively, with the price rising by a further 6.22% on Monday to settle at $1.39. However, XRP could not break past the $1.40 level, and Tuesday saw XRP fall significantly and slip below the 20-day SMA. XRP fell by over 18% during this session and settled at $1.12. While Wednesday also started on a very bearish note, with the price down by a further 8% at one point, the price recovered, and the price ended up dropping by 2.53%, indicating that the price could recover the following session. The current session sees XRP in the green, but we can also see that buyers and sellers are still trying to take control of the market. The MACD and the Parabolic SAR are currently both bearish, indicating that we could see the price fall further during the current session. 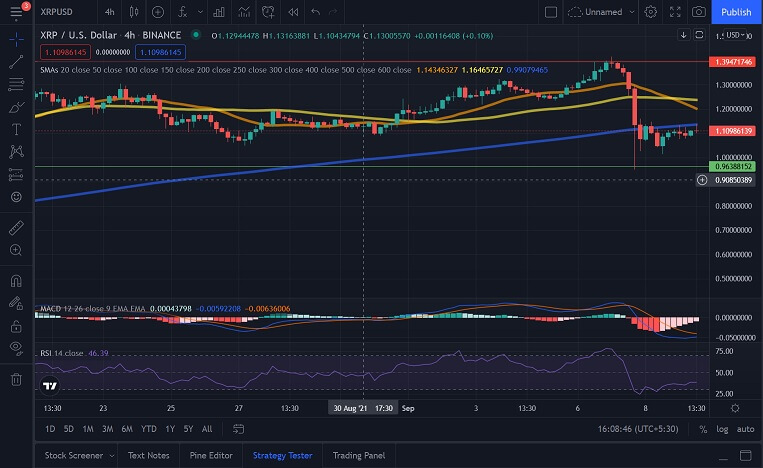 Looking at the 4-hour Ripple price chart, we can see that after reaching $1.39 on 6th September, sellers took over the market, and we saw XRP fall significantly on 7th September. The price slipped below the 20-bar SMA and the 50-bar SMA on the same day and settled just above the 200-bar SMA at $1.13. However, XRP could not maintain this level and fell even further, going below the 200-day SMA as well to finally settle at $1.07. Despite briefly going above the 200-bar SMA, XRP fell back again, and the current session sees XRP at around $1.10, with the 200-bar SMA acting as resistance. The MACD is still bearish while the RSI has climbed back into the neutral zone, indicating that we could see the price stabilize a little.

According to data provided by XRPscan, Jed McCaleb, Ripple co-founder of its first CTO, has sold no XRP since September began. The most recent tranche from Ripple to McCaleb's XRP address arrived on September 1, when the fintech giant unlocked a billion XRP from escrow.

From that day until August 16, the amount of XRP sent by Jed to exchanges for selling totaled 86.3 million.

From August 16, having 821 million XRP remaining on "tacostand," until September 1, McCaleb converted 112 million coins to fiat. The balance of his wallet currently remains the same as it was on the first day of September.

As a rule, McCaleb sells XRP every day with rare pauses. But over the past few days, he has not sold any coins.

Looking at the Ripple price chart, we can see that the current session has seen Ripple trade in the green, with its price rising marginally. Whether XRP can establish support and push towards the 20-day SMA at $1.20 remains to be seen. However, if sellers can pierce this level of support, we could see the price fall down to around $1.

Ripple
XRP
Top Brokers in
All Regulated Brokers
67% of retail clients lose money when trading CFDs with this provider.