The Ripple price made a marginal recovery over the weekend that saw it stem the bearish sentiment that plagued XRP for all of last week, recovering marginally on Saturday to push up to $1.07 and pushing further on Sunday to $1.11. However, XRP could not sustain the momentum and started Monday in the red, with the price down by over 4%. XRP has started the current session positively, with a marginal rise in the price after it found support at the $1.05 level thanks to the 50-day SMA.

Ripple Price Chart Indicates XRP Could Push Up To $1.10

Although the Ripple price had started the previous week on a very positive note, rising by over 6% to push up to $1.39, Tuesday saw a significant fall in price after resistance at $1.40 pushed the price back down. XRP fell by 18.79% on Tuesday alone, in a session that saw it slip below the 20-day SMA to finally settle at $1.12. The rest of the week also continued on a similar note for XRP, with the price falling further on Wednesday and Thursday. By Friday, the price had dropped to $1.05, where it found support. 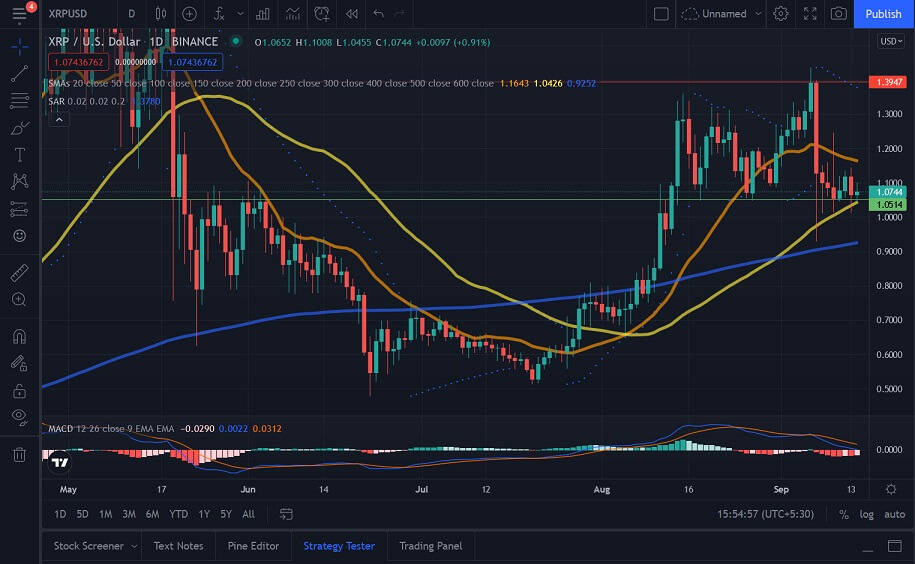 Thanks to the support at $1.05, the Ripple price stabilized over the weekend, rising by 2.19% on Saturday and a further 3.73% on Sunday to end the weekend at $1.11. However, Monday started on a bearish note for XRP, with the price falling by nearly 5% to settle at $1.06. The support at this level pushed up XRP again, with the current session seeing a marginal rise. While the Parabolic SAR and the MACD are both bearish, if the buyers can take control of the session and push XRP beyond $1.10, we could see both flip to bullish. 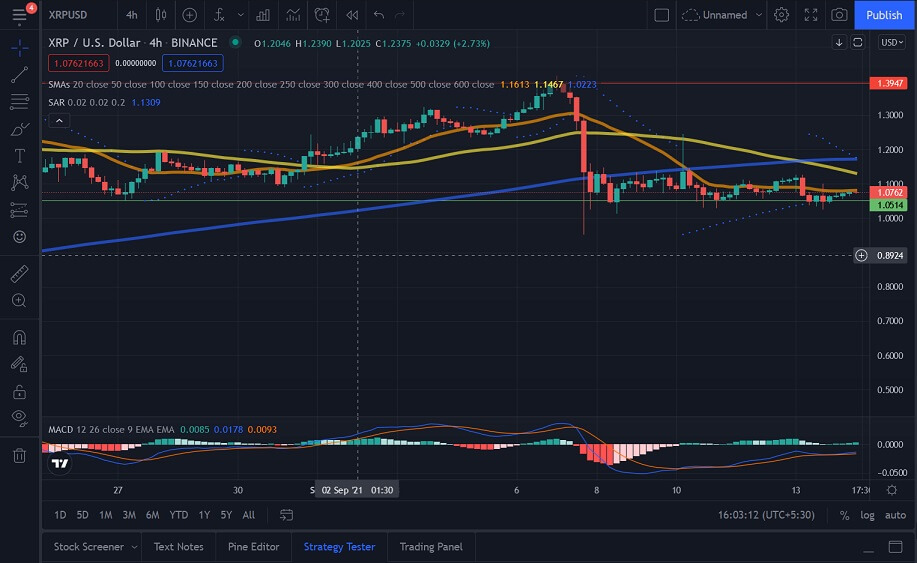 Looking at the 4-hour Ripple price chart, we can see that the 200-day SMA was acting as resistance. After the bearish cross between the 200-day SMA and the 20-day SMA, the latter started acting as resistance and pushed XRP down to $1.05 by 11th September. However, the price rebounded to go up to $1.09 and then to $1.10 by the 12th. XRP pushed beyond the 20-bar SMA to settle at $1.11 before being pushed back to $1.04 and back below the 20-bar SMA, thanks to the bearish cross between the 200-bar SMA and the 50-bar SMA. The current session has seen a recovery, with the price back up to $1.07, and with the MACD currently bullish, we could see the price push further and beyond the 20-bar SMA during the current session if the bulls can take control of the session.