Despite this recent drop, there are two signs in the Ripple daily price chart which bodes well for XRP: 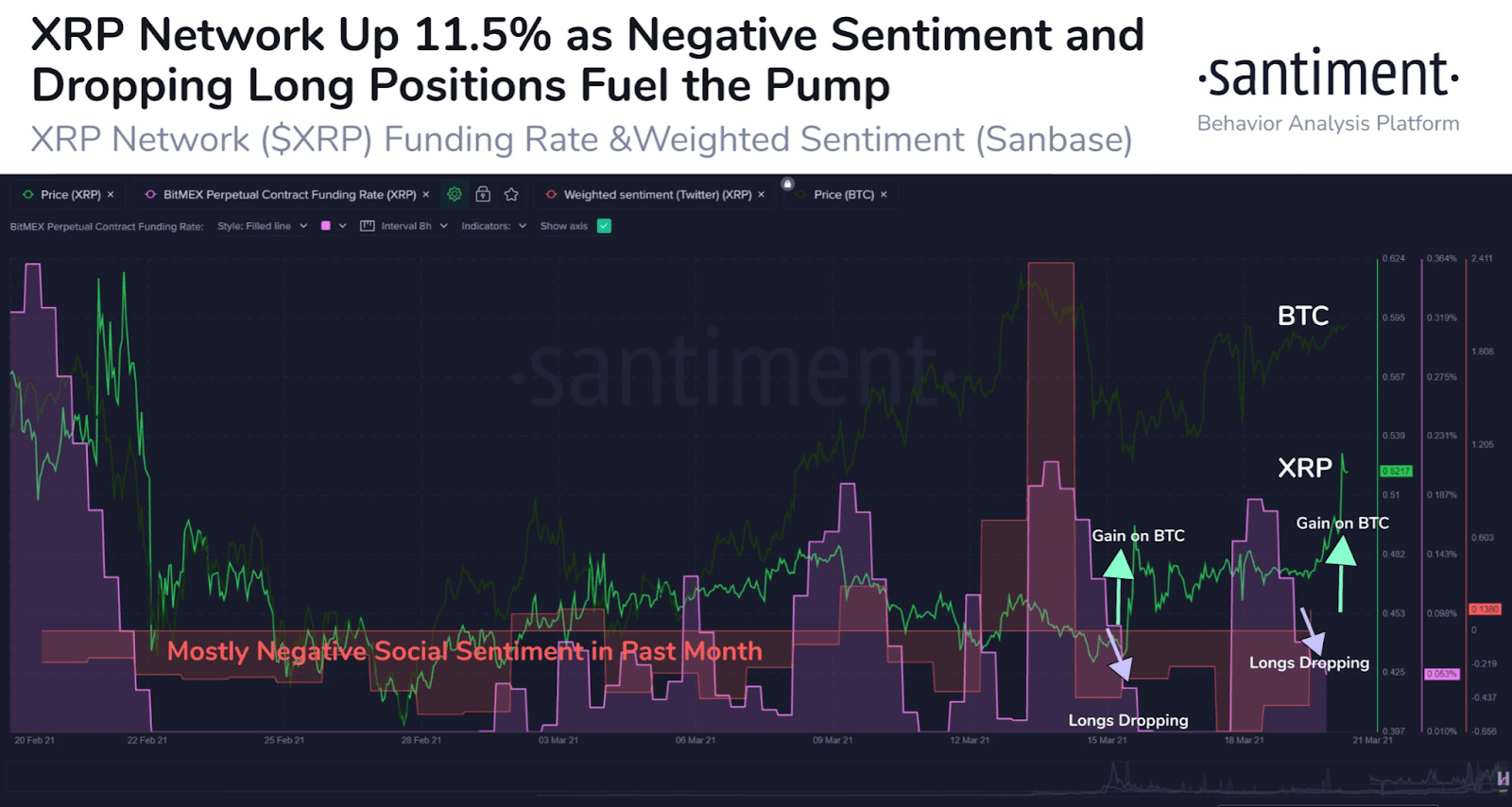 “Chart with upwards trend #XRP is +11.5% the past 24 hours to make up the most single-day ground on #Bitcoin since Jan. Our weighted social sentiment algo indicates $XRP's continued negative sentiment. #Bitmex longs remain down as well. Both ingredients tend to fuel price pumps.”

In a white paper titled “The Future of CDBCs,” Ripple recently noted that XRP could serve as a bridge for different central bank digital currencies (CBDCs).

One example of a neutral bridge is the digital asset XRP, which can be used to bridge two different currencies quickly and efficiently.

The report said that XRP would enable different CBDCs to move value seamlessly and cost-effectively. Ripple named financial inclusion and innovation as the main benefits of CBDCs.

The company mentioned the ability of central banks to maintain control over monetary policy as a positive feature. Addressing the challenges faced by CBDCs, Ripple noted that it is crucial to ensure their interoperability.

Each individual CBDC can create its own rules and policies that best suit its domestic market. However, CBDCs should also be united and guided by collective protocols that will enable them to cooperate seamlessly with other CBDCs and Digital Currencies.

According to an earlier report, Ripple announced the launch of a private version of the XRP Ledger that is designed for central banks. Ripple encouraged central banks to use the private ledger instead of building a new one from scratch.

Jeremy Hogan, attorney at Hogan and Hogan (a British law firm) shared crucial insights from the recent hearing on the US SEC’s lawsuit against Ripple. In a YouTube video, Hogan highlighted Magistrate Judge Sarah Netburn’s views on XRP and explained how it is different from BTC or ETH.

My understanding about XRP is that not only does it have a currency value but it has a utility and that utility distinguishes it from Bitcoin And Ethereum.

The Judge asked the SEC attorney whether everyone who sold XRP sold them illegally. To this, the SEC’s lawyer replied:

No, under Section 4, only Ripple and affiliates of Ripple can have sold XRP illegally.

The SEC appears to have made it clear that other than Ripple and its employees, no individual, exchanges or enterprise has violated SEC guidelines by selling XRP. This is an important statement that could relist XRP on all US-based exchanges.

Following the SEC-Ripple hearing, it is pretty clear the Ripple’s case is becoming stronger each day. A positive impact may also be incoming for the XRP price shortly.