Ripple Price Prediction: XRP on the Launchpad to the moon if this crucial technical pattern matures

Ripple bulls appear to be bowing to overhead pressure around $1.5. After a gradual but consistent recovery from support established at $0.8 last week, the barrier occurred. Buyers grabbed the mantle from the bears to resume the recovery to highs past $2 in the near term. Meanwhile, XRP teeters at $1.33 as bulls go head to head with the seller congestion toward $1.5.

The four-hour chart shines a light on a symmetrical triangle – formed by two trend lines, connecting a series of descending highs and ascending lows. This pattern highlights a consolidation period ahead of a breakout. The two lines meet at a roughly equal point, but the breakout is anticipated before that.

Symmetrical patterns have both bullish and bearish impulses. A breakout occurs when the price cracks the upper trendline resistance, while a breakdown happens on slicing through the lower trend line.

If the 50 Simple Moving Average (SMA) remains intact, buyers will have a stable ground to plan the next attack mission. An upswing above the triangle triggers many buy orders, increasing the volume. A breakout usually has a price target, measured from the highest to the lowest point. For example, the pattern on the four-hour chart eyes liftoff to $3.31. 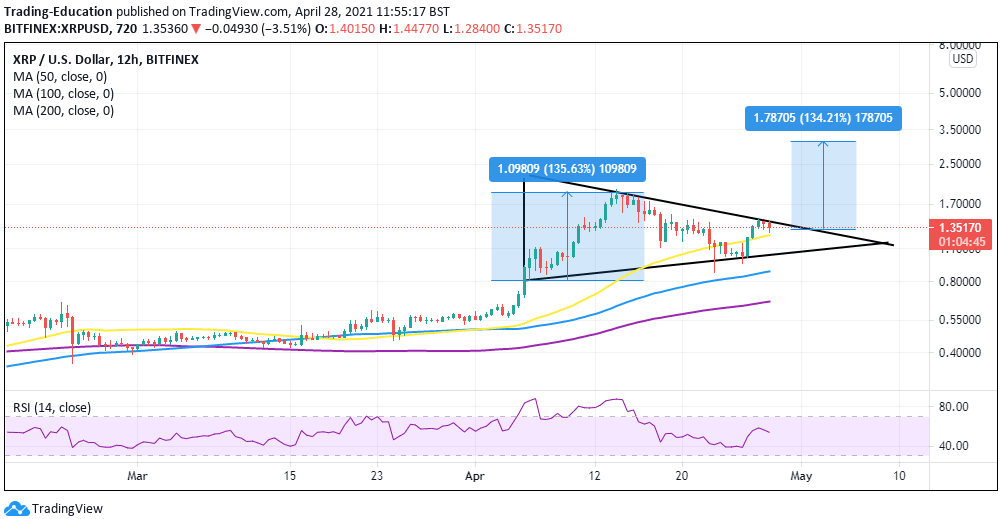 The active addresses model by Santiment shows that speculation has significantly gone down since mid-April. At the time, the XRP Ledger recorded a surge in the network activity, with interacting addresses hitting nearly 55,000. Over the past couple of weeks, this number has decreased to roughly 22,000, representing a 60% drop. As the activity level dwindles, speculation also falls, which affects the asset's momentum; thus, it is a bearish signal.

It is essential to realize a symmetrical pattern also has a bearish impulse. If the correction continues under the lower trend line, Ripple could start a massive breakdown, exploring levels under $1. In the meantime, support has been envisioned at $0.8, the 200 SMA on the four-hour chart, and $0.55.