Ripple Price Prediction: XRP Poised for an Explosive Launch to $1.4

Ripple bulls are finally back in control following last week’s bearish dominance across the cryptocurrency market. The cross-border money transfer token revisited support at $0.8 before the ongoing uptrend resumed.

Monday’s break above $1 occurred after the news that Ripple had won one more battle against the US Securities and Exchange Commission (SEC). Judge Sarah Netburn ruled to uphold Ripple’s client-attorney privilege, barring the SEC from accessing the communication record made by Ripple regarding the sale of the XRP tokens in light of the securities laws.

Investors celebrated the win as they increased the stake in the token. An increase in the tailwind force paved the way for Ripple to scale above $0.9 and settle above $1. At the time of writing, XRP teeters at $1.06 amid a potential technical pattern’s breakout.

Ripple’s uptrend is gradually building momentum and could explode massively. As the recovery from May’s crash to $0.65 gained ground, a resistance around $1 challenged the bulls’ effort. However, their resilience continued to form a higher low sequence, explaining the printed ascending triangle.

Triangles have exact breakout targets measured from the highest to lowest points. A high trading volume supports the upswing following price action above the x-axis resistance. 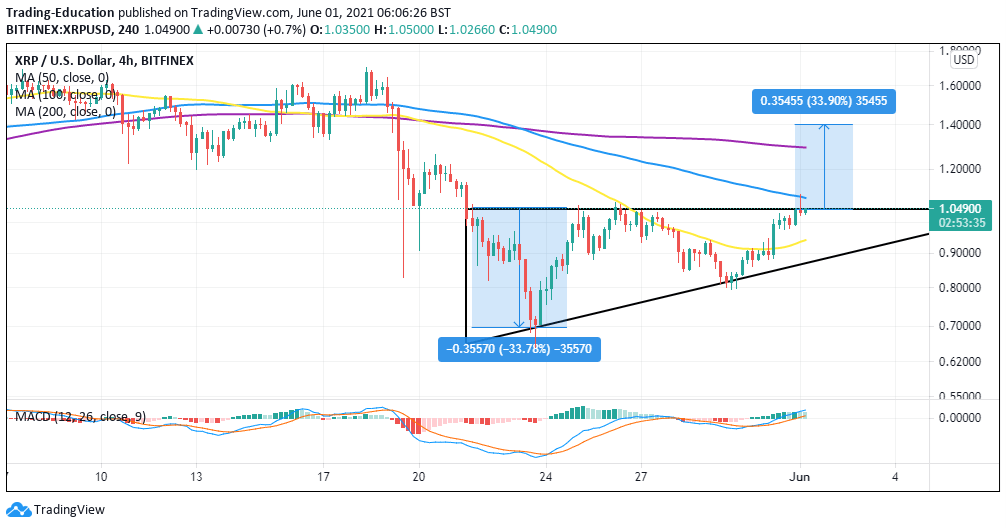 The Moving Average Convergence Divergence (MACD) has added weight to the uptrend by lifting into the positive region. Moreover, the MACD line recently presented a buy signal after crossing above the signal line.

If XRP sustains the uptrend and, more specifically, closes the day above the 100 Simple Moving Average (SMA) on the four-hour chart, the remaining journey to $1.4 will be easy to accomplish.

The behavioural analytics platform, Santiment reveals that XRP’s network growth is in a downward spiral with minor signs of recovery. This on-chain metric tracks the number of addresses joining the XRP Ledger each day.

A declining network growth resembling the drop from a 30-day high of 7,920 to the current 3,150 addresses is a bearish signal. It shows that buyers struggle to sustain the uptrend, especially with the regular inflow and outflow of tokens disrupted. Moreover, the level of speculation goes significantly down, thus hindering the crypto asset from gaining ground.