At the time of writing, Ripple teeters at $1.48 after holding on the critical support at the 100 Simple Moving Average (SMA) on the four-hour chart. The formation of a vital technical pattern hints at XRP resuming the uptrend.

Ripple on the Cusp of a Massive Breakout

The international remittance token is dancing within the confines of an ascending triangle. This is a bullish pattern that tends to form in an uptrend. There are instances when the triangle will develop as a reversal pattern while the downtrend nears an end.

The triangle’s hypotenuse indicates that bears refuse to let their positions go lower while the market forms a higher low pattern. On the other hand, the x-axis tends to stay in place until the sellers’ are overturned. It insinuates a position to buy as the prices breakout further, with a target measured from the highest to lowest triangle points.

Often the volume contracts as the triangle nears maturity. However, following the break at the x-axis, the volume appreciably rises, thus confirming the beginning of an uptrend. Therefore, as Ripple close nears the horizontal barrier, the breakout approaches. The pattern has a 46% target that could catapult the price to $2.4. 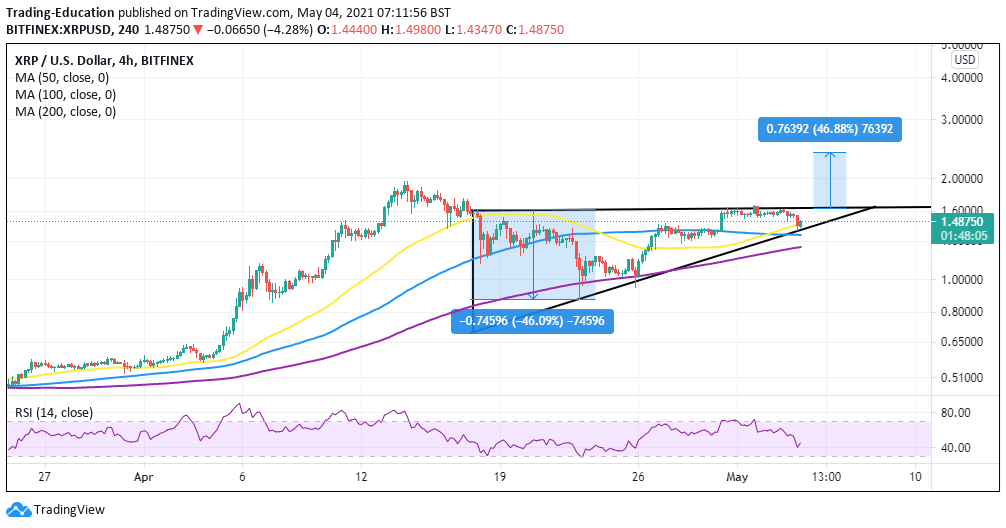 The Relative Strength Index (RSI) has also validated the incoming uptrend on the four-hour chart. This indicator dropped from the overbought region when Ripple was rejected at $1.6. Support at 40 has seen the RSI begin pointing upward, thereby hinting at the buyers’ grip becoming stronger.

The level of speculation has significantly lowered over the past couple of weeks. According to Santiment, an on-chain analytics platform, the number of active addresses on the network currently stands at roughly 24,100 from a 30-day high of nearly 54,600.

As network activity goes down, speculation decreases which negatively impacts the price. Therefore, if the active addresses on the network fail to rise, Ripple’s uptrend may delay or be sabotaged altogether.