Ripple has gradually and persistently sustained recovery within the confined of an ascending parallel channel. July’s primary support at $0.52 ensured that bulls regained balance and control over the price. Moreover, an improved fundamental outlook has accorded XRP the power to bounce off higher support areas; thus, securing the trajectory toward $1.

The short-term technical outlook shows that XRP is mainly in the bulls’ hands. First, the cross-border money transfer token’s downside is protected by the ascending parallel channel’s lower boundary. In addition to that, the region between $0.7 and $0.72 is becoming a solid buyer congestion zone. With robust support in the picture, the least resistance path will remain upward.

Ripple needs a confirmed break above the support at $0.75 to confirm the uptrend. Trading above $0.8 will ascertain the aggressive grip by the bulls and perhaps trigger immense buy orders amid soaring speculation for gains past $1. 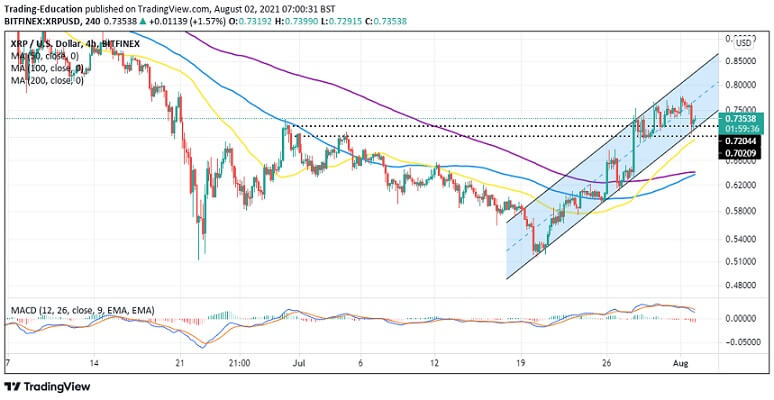 The impending move in Ripple’s price is validated by an uptick in the age consumed on-chain metric. According to Santiment, this metric tracks the number of tokens changing addresses on a specific date, multiplied by the time they last moved.

A massive spike in this particular graph highlights that many XRP tokens are moving after being idle for an extended period. The price tends to move significantly following such spikes. Note that this metric does not foresee the direction of the trend but shows incoming volatility.

On the other hand, the network growth metric has significantly improved over the last week. Santiment explains that this on-chain tool follows tracks the number of newly-created addresses on the XRP Ledger. An upswing in the graph shows that Ripple is gaining traction, especially in mainstream adoption. Realize that, as more addresses join the protocol, network activity shoots up, and bulls gain momentum to sustain the uptrend.

What Could Invalidate The liftoff To $1?

The Moving Average Convergence Divergence (MACD) has a bearish signal based on the four-hour chart. This call to sell manifested as the 12-day EMA crossed below the 26-day EMA. Besides, as the MACD drifts toward the mean line, the odds for a correction back to $0.7 and lower price levels increase.

Ripple
XRP
Top Brokers in
All Regulated Brokers
67% of retail clients lose money when trading CFDs with this provider.