Ripple lost some ground from the resistance at $0.9, where the bearish leg extended to $0.82. However, the support at $0.8 was not tested, which avoided a potentially massive drop to $0.78 and $0.7, respectively.

Meanwhile, the international money transfer token trades at $0.85 while bulls battle the 50 Simple Moving Average (SMA). If Ripple makes a four-hour close above this short-term hurdle, bulls may extend the price action toward $0.9. Still, it is essential to consider that feeble on-chain front that may delay Ripple’s recovery.

The network growth model is an on-chain metric developed by Santiment, a leading behavioural analytics platform. The model tracks unique addresses created and involved in transactions on the protocol for the first time.

Typically the chart highlights the project’s adoption while pointing out whether the token is gaining or losing traction. When an asset’s network growth rises consistently, in other words, the number of newly created addresses sustains an uptrend; the token value also shoots up.

However, diminishing network growth is a bearish signal. It shows that the digital asset does not have the willpower to proceed with the uptrend, hinting at a potential breakdown. For instance, only 2,163 addresses joined the XRP Ledger on June 16 compared to a 30-day high of 6,488.

Santiment also shines a light on the constantly dropping network activity. The number of unique addresses transacting on the protocol tracked daily gives an insight into the level of investor speculation. Dwindling network activity is a bearish signal because fewer users speculate on the price jumping to higher levels.

In the meantime, the four-hour chart shows a gradually improving technical outlook. The Relative Strength Index (RSI) may cross above the midline, emphasizing a stronger bullish front. As mentioned, breaking the 50 SMA barrier would also call more buyers into the market, thus bolstering upward price. 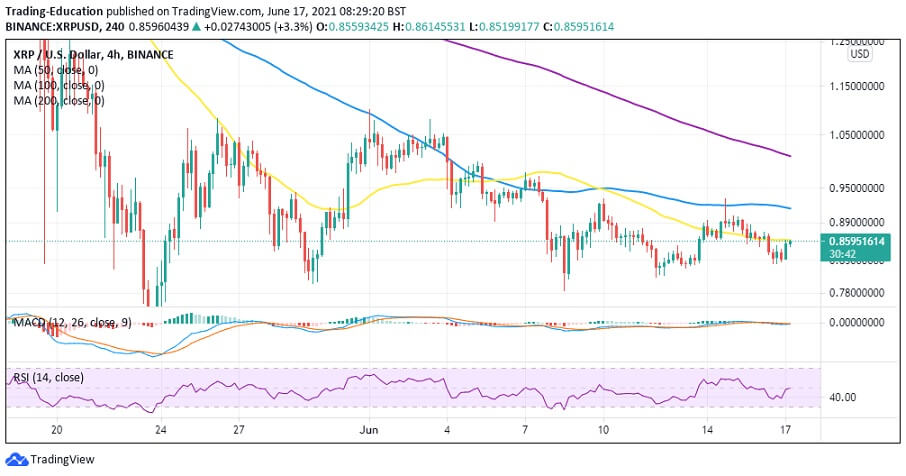 On the other hand, the Moving Average Convergence Divergence (MACD) appears to be taking up a leveling motion at the zero line, which means that a sideways trading action may follow before Ripple charts the most anticipated recovery back $1.