Ripple currently trades sideways after running into a stubborn resistance under $1.5. The seller congestion at this level delays the bulls’ desire to hit highs above $2. Meanwhile, XRP trades at $1.36 at writing amid an aggressive tug of war between the bulls and the bears.

The cross-border value transfer token trades between the 50 Simple Moving Average (SMA) support and the 100 SMA hurdle on the four-hour chart. Following the lift from the primary support at $0.85, XRP has struggled with this seller congestion. The longer the price stays under this zone, the stronger the bullish camp becomes.

On the downside, the 50 SMA is the immediate and vital support. As long as the buyer congestion at this point is not shaken, bulls will be relatively in control, focusing on breaking the hurdles on the upside. 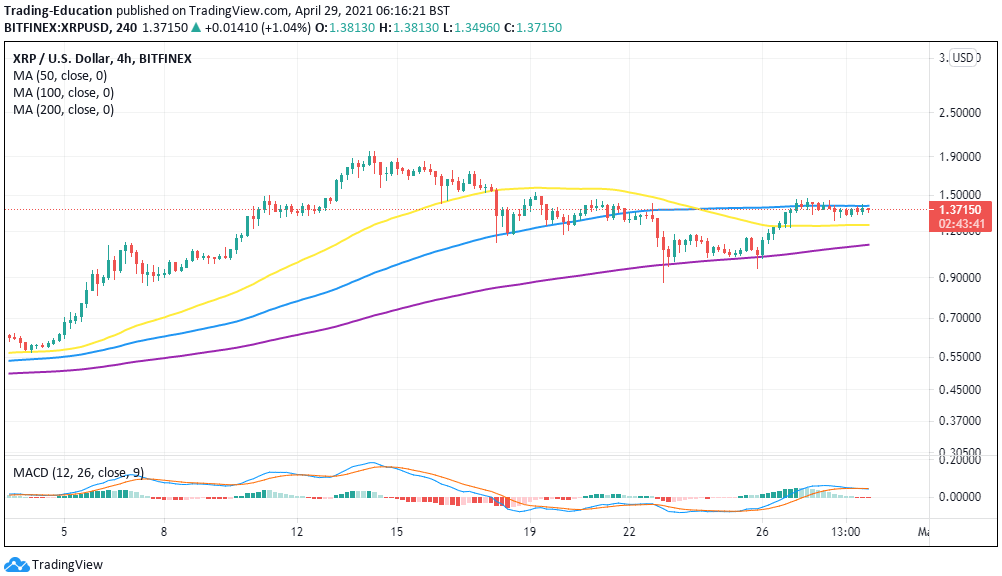 A break under the 50 SMA would trigger massive sell orders due to market instability and investor panic. The drop to $0.85 last week is still fresh, while the stubborn hurdles reveal that Ripple is not of the woods.

Santiment’s market value realized value (MVRV) on-chain metric is currently resetting, suggesting that the overhead pressure is likely to soar in the near term. According to the behavioural analytics platform, the MVRV highlights “the average profit or loss of those holding XRP tokens which moved in the last 30 days, based on the price when each token last moved.”

A higher or declining MRVR ratio shows investors are still taking profits, explaining the surge in selling pressure. At the moment, the ratio stands at 21.75% while the indicator points south toward zero, whereby recovery is expected to begin.

The network growth on-chain metrics model shines a light on the number of new addresses joining the protocol each day, according to Santiment. It highlights user adoption over time and is used to gauge whether the network gains or loses traction.

The chart below shows a massive slump in the newly-created addresses from the 30-day top of nearly 12,400 to the current 6,400. Declining network growth is a bearish signal, revealing that the uptrend is unstainable while adoption takes a hit.

The Moving Average Convergence Divergence (MACD) indicator leveling motion within the positive region affirms the sideways trading. Therefore, XRP pivotal movement between the 50 SMA and the 100 SMA may last longer.