As reported yesterday, Ripple is still consolidating itself in a symmetrical triangle and is priced around $0.61. From this technical pattern, the price can break out either way. The upside and downside target for XRP is around $0.925 and $0.33, respectively. Let’s dig deeper to find out what else we can ascertain from technical analysis.

Peter Brandt, a well-known analyst, and a 40-year trading veteran feels that XRP is on the verge of a huge jump, with the $0.68 resistance being the key. Brandt wrote, “the correction in XRP has taken the form of a classic symmetrical triangle. A close above .6810 would complete this pattern.” If the price breaks past this resistance, it should reach $1.

XRP jumped from $0.326 to $0.695 between 21st November to 24th November. Since then, the price has been consolidating in a symmetrical triangle formation. Looking at the upside, if XRP breaks above the aforementioned $0.68 resistance barrier, it should be able to reach $1.

To add further credence to the bullish outlook is the number of new addresses entering the protocol. As Santiment points out that the number of addresses on XRP is making more ground on Bitcoin. 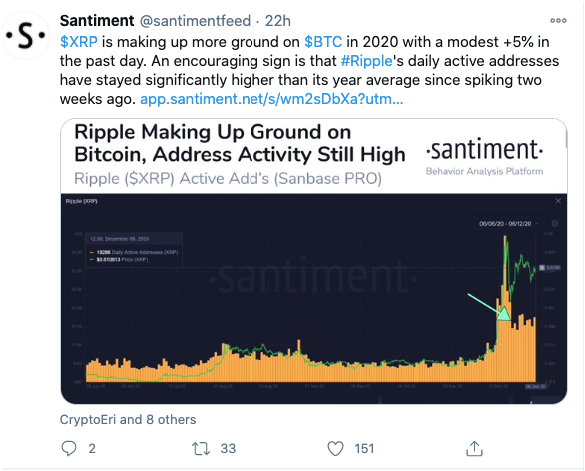 What’s the flipside? Can the bears take over?

While the overall sentiment is bullish, it will be remiss of us not to mention the bearish flipside. It seems like the whales have been selling off their tokens at a rapid pace. Santiment’s holder distribution chart shows us that the number of addresses holding 1 million to 10 million XRP tokens fell by 2.7% since November 22.

If this bearish thesis holds, the downside target for the symmetrical triangle is $0.33. The moving average convergence/divergence (MACD) shows increasing bearish momentum. This adds further credence to our bearish outlook.

On the upside, there is key resistance at $0.68. Breaking past this level will take the price to $1. Keep in mind that Ripple has not seen this level since February 2018.

On the downside, the 20-day SMA ($0.57) is absolutely crucial. If the price somehow breaks below this zone, the next healthy support will be at the 50-day SMA ($0.38). If neither of these levels holds firm, the price will drop down to the $0.33 target.