The Ripple price found support on the 50-day SMA and jumped from $0.46 to $0.56 between March 17 and March 26. Keep in mind that XRP has repeatedly tried to break past the $0.56 resistance and failed.

Ripple Price Buyers Got Stuck Below $0.56

The Ripple price is now trending horizontally having failed to break the $0.56 line. However, the Bollinger band is expanding, which shows that the price volatility is on the rise. This could indicate that the $0.56 resistance barrier will likely be tested again.

The MACD in the Ripple price daily chart shows us that the MACD is on the rise, which adds further credence to our bullish outlook. The parabolic SAR shows us that overall market sentiment is positive.

In 24 hours, large exchanges recently shifted around $40 million worth of XRP, according to Whale Alert. Various blockchain trading platforms like Bitstamp, Binance and Huobi transacted a total of 72 million XRP tokens (roughly $39,934,849). 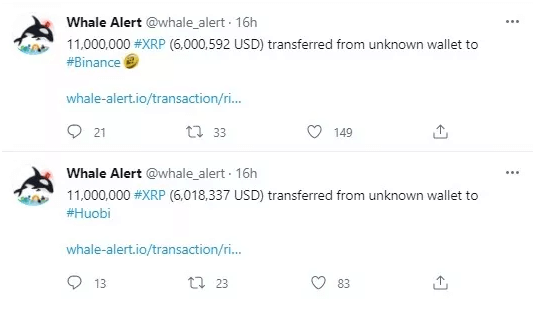 In related news, Switzerland-based crypto exchange Lykke has resumed XRP trading after suspending it in January. The platform's chief Richard Olsen announced the relisting of the controversial cryptocurrency. He also noted that it might bridge the gap between traditional finance and digital assets.

Ripple price will likely test the $0.56 resistance again. Upon breaking past this zone, the XRP will likely aim for $0.60 level.