Over the last three days, the Ripple price dropped from $1.28 to $1.075 – breaking below the $1.20 and $1.10 psychological levels. During this drop, XRP managed to flip the parabolic SAR from positive to negative.

Ripple Price Has Staunch Resistance At $1.28

Between August 14 and August 16, the Ripple price reached intraday highs of $1.35. Previously, between July 21 to August 14 XRP jumped from $0.53 to $1.28. During this jump, RIpple managed to flip the 20-day, 50-day, and 200-day SMAs from resistance to support and reverse the parabolic SAR from negative to positive.

In the 4-hour time frame, we can see that since August 16, the Ripple price has been on a downward surge, flipping the 20-bar SMA from support to resistance. The 50-bar SMA has stopped further downtrend. Important to note that despite flashing bullish red-nine candlestick, Ripple has continued its downfall.

The largest batch of crypto was sent between Binance and Huobi. US-based Bittrex moved first 12 million and then 9 million XRP to Upbit. The overall equivalent of XRP moved in fiat totals $77,105,418. However, the glitch that appeared at the end of last week remains, and the tweets about these XRP transfers quickly get removed by Whale Alert, but the links with the details of the transactions are available. 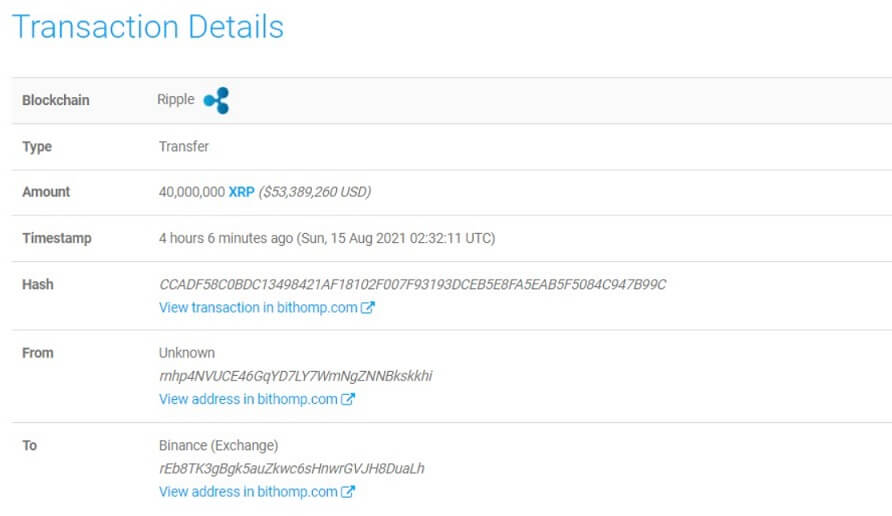 XRP seems to be on a roll, reaching new highs in light of the bullish crypto market recently. XRP’s parent company, Ripple was tangled in lawsuit troubles ever since the SEC opened up a case against the global payments company. It accused Ripple of offering unregistered securities up to the amount of $1.3 billion, starting in 2013. The dispute, which began in December last year, has ended up nowhere but has done much to damage XRP’s reputation. Despite this, XRP has been performing notably well.

Ripple Labs recently asked the court to deny the US SEC’s demand for a million employee Slack messages related to XRP, per a new legal filing. Ripple’s defense attorneys wrote:

“The SEC’s extraordinary demand calls for an extensive and costly fishing expedition that would likely take months to complete and come at very significant cost. The SEC’s disproportionate request is also unreasonably duplicative of Ripple’s extensive production of over one million pages of discovery — including emails, documents, text messages, and responsive Slack messages for 33 custodians.”

By custodians, the SEC means people it has identified as relevant to the case. Last December, the SEC filed a lawsuit against Ripple alleging that the company’s sale of XRP was an unregistered securities offering worth over US$1.38 billion. The SEC also named Ripple’s CEO Brad Garlinghouse and executive chairman Chris Larsen as co-defendants for allegedly aiding and abetting Ripple’s violations. The lawsuit is being closely watched by crypto investors and companies around the world as the outcome could reshape the industry in one of the world’s biggest and most influential crypto markets.

Last week, the SEC asked the court to force Ripple to search and share with the SEC its employee communications on Slack, a business messaging platform. In a letter to US Magistrate Judge Sarah Netburn, the SEC complained that a “massive quantity” of data had not been collected or searched due to a data error by Ripple’s vendor and that Ripple’s refusal to produce the missing documents was highly prejudicial to the agency.

The SEC has refused Ripple’s offer of a compromise for the company to produce additional Slack messages from a limited set of nine custodians. SEC attorney Jorge Tenreiro wrote:

“The relatively few Slack documents Ripple has produced so far demonstrate that the Missing Documents are necessary for the SEC to build a complete and accurate record for summary judgment and trial. The messages produced show Ripple employees (including custodians whose Slack messages Ripple refuses to search) discussing issues directly relevant to disputes at the heart of this case.”

According to Ripple, the Slack messages sought by the SEC could cost nearly US$1 million to collect and process, more than Ripple has spent to date on other e-discovery costs in this litigation.

The additional discovery sought was also unlikely to resolve disputes at the heart of this case and would require significant revision to the litigation’s schedule. This dispute is the latest battle between the SEC and Ripple in the shadows of a looming deadline to wrap up discovery. Fact discovery and expert discovery are due to be completed by August 31 and October 15, respectively.

The buyers must ensure that the Ripple price doesn’t fall below the $1 psychological level.