XRP has failed at the $0.695 and $0.6245 resistance lines, having entered a proper downtrend. As of now, the cross-border remittance tokens is trading for $0.56 and consolidating inside the symmetrical triangle pattern. Now, the question remains, is the price going to break above or below the triangle? Let’s check out the technical analysis.

XRP bulls run out of steam

Following a highly bullish November, we are currently in the midst of a bearish December as the crypto market is going through a price correction. So far in December, XRP has dropped from $0.67 to $0.56.

Looking at the daily price chart, XRP is consolidating in a symmetrical triangle. Over the last four days, the price has broken below the 20-day SMA and is trending in the lower half of the Bollinger Band. If the price breaks above the triangle, the price target is $0.86, while a break below takes the price to $0.25

Now that we know the price targets, how do we identify if the XRP is going to break above or below the triangle? Looking at the 4-hour chart, we can see that the price bounced up from $0.53 and initiated its recovery. However, it then encountered crippling resistance at the $0.58 resistance line.

After failing to break past this level repeatedly, the price has gone tumbling down. In the process, the 4-hour price has crashed below the 20-day SMA. The only viable support that lies on the downside is at $0.53. This failure has forced the moving average convergence/divergence (MACD) to reverse from bullish to bearish.

The Flare Network snapshot is less than 24 hours away and is scheduled to occur on December 12, 00:00 UTC. The snapshot will help determine the addresses that will receive the Spark Tokens (FLR) next year between March and May. It looks like the community has participated pretty heavily in the airdrop. 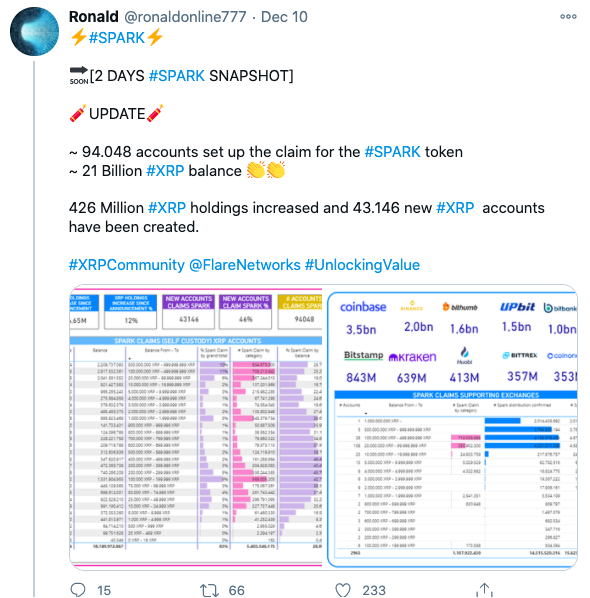 The tweet above also highlights the crypto exchanges participating in the Flare Networks snapshot.

If Ripple breaks below the symmetrical triangle, the key price level is the 50-day SMA ($0.398), as it is the only support line of note on the downside.

However, if the buyers somehow manage to turn things around and break above the triangle, the key resistance barrier for the price will be the 0.695 lines, which had managed to stall the cross-border remittance token before.