Ripple Technical Analysis: XRP Is On The Verge Of Flashing Buy Signal

This Monday, the Ripple price has crashed from $0.774 to $0.67, reversing the 200-day SMA from support to resistance. A further drop will take XRP to the oversold zone. The TD sequential detector shows that XRP could crash for three more sessions before flashing the buy signal in the form of a red-nine candlestick.

In the 4-hour time frame, the Ripple price has flashed three negative signals:

The US Securities and Exchange Commission’s (SEC) lawsuit against Ripple is taking a lot longer than anticipated. The lawsuit alleges that Ripple raised more than $1.3 billion by selling XRP in ongoing unregistered securities offerings. The payments giant has denied the allegations and wants the case resolved as quickly as possible.

But without a settlement, the case will likely continue into early 2022, as per attorney Jeremy Hogan, who closely follows the lawsuit. Earlier this week, a New York court pushed back a fact key finding deadline to October 15. But that is far from the only obstacle. One close commentator of the case, lawyer James Filan, rounded up all the key dates holding back the case. 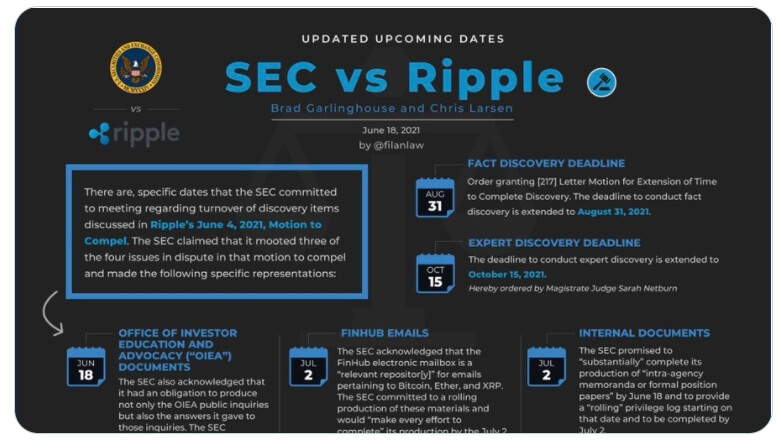 In March, Judge Sarah Netburn compelled the SEC to disclose its emails and internal documents on Bitcoin, Ethereum, and XRP by June 18. But on June 14, the court granted the SEC’s motion to delay the deadline for another two months.

Ripple thinks these emails will show whether the SEC is prejudiced against top cryptocurrencies and if the SEC brought that baggage to the lawsuit.

These emails aren’t publicly available at the moment. The judge is also yet to rule whether the SEC has to disclose its internal trading policies around crypto.

The SEC must produce email correspondence from its main FinHub mailbox about Bitcoin, Ethereum, and XRP, as well as internal documents by July 2. Last week, the SEC said it has already collected 25,000 emails and is still reviewing “tens of thousands” of internal documents.

On 14 June, Judge Netburn extended the deadline to conduct fact discovery to August 31. That is the deadline by which the SEC and Ripple must polish their arguments and marshal evidence.

The deadline was initially set for July 2, so both parties have a little more time even though Ripple’s lawyers initially objected to the SEC’s extension request. They said that the litigation constitutes “an existential threat to its business.”

As things stand, the Ripple price is crashing towards the $0.60 psychological level.