Ripple has relatively consolidated a wide range between $0.8 and $1.12. The cross-border money transfer token recently bounced off the lower range limit and currently teeters at $0.95.

A break above $1 is needed to affirm that XRP is out of the woods. Here, buyers will concentrate on lifting to higher levels. Forming a critical technical pattern on the four-hour chart may validate the upswing in the near term.

Ripple on the brink of a massive liftoff

The 4-hour chart reveals the formation of a symmetrical triangle. The chart pattern is created by converging a couple of trend lines, linking sequential peaks and troughs. Generally, the lines cross at an approximately equal slope. The chart pattern brings to light a period of consolidation ahead of either a breakout or a breakdown.

Symmetrical patterns tend to have precise price targets for the breakout or breakdown, mainly measured from the highest point to the pattern's lowest point. For instance, Ripple could swing 50% higher after rising above the triangle. Such a move will bring XRP above $1.4 and perhaps shift the bulls' focus to levels around $2. 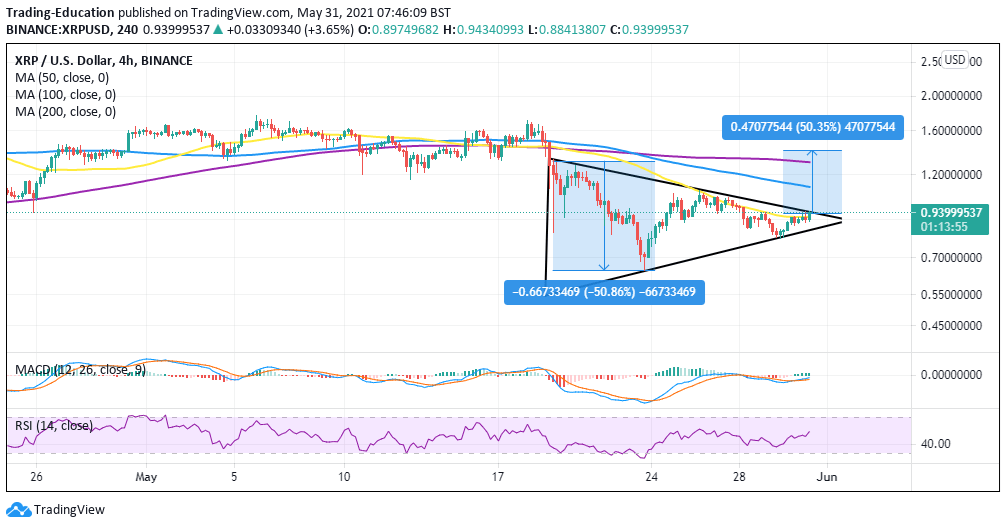 The short-term technical outlook has flipped impressively bullish, as confirmed by the Moving Average Convergence Divergence (MACD) movement toward the positive region. Crossing the mean line (0.00) will likely drive the bullish narrative. Similarly, the widening divergence of the MACD line (blue) above the signal accentuates the bullish picture.

It is worth mentioning that the Relative Strength Index (RSI) adds credence to the narrative by quickly moving toward the overbought area. For now, the slightest resistance path is upward, as validated by the short-term trend indicators and the symmetrical triage.

A daily close under $1 would lead to a contrary price action amid the rise in overhead pressure. The 50 Simple Moving Average (SMA) is in line to provide support, but if lost, Ripple will drop to the following anchor zones at $0.9 and $0.8, respectively.