The Ripple price encountered resistance at the 20-day SMA and dropped from $1.05 to $0.545 between June 4 and June 22. During this drop, XRP managed to reverse the 200-day SMA from support to resistance. Following that, RIpple bounced up from the $0.545 support and climbed to $0.71 till June 30. Here is what happened after that.

On June 30, the Ripple price charted the bearish cross in the daily timeframe with the 200-day SMA crossing above the 20-day SMA. XRP then dropped to $0.65 on July 2. The buyers finally took back control this Saturday and attempted to rectify the downward trend by lifting Ripple to $0.67. Since June 23, the relative strength index (RSI) has jumped from 26.35 to 42, indicating that XRP is no longer oversold.

In the 4-hour time frame, the Ripple price has jumped from $0.646 to $0.67 over the last six sessions. Due to this jump, the MACD has flipped from bearish to bullish and reversed the 20-bar and 50-bar SMAs from resistance to support. As per the TD sequential detector, XRP will have three more bullish before flashing the green-nine candlestick (a sell signal).

BIS Report: XRP and Ether Owners Are The “Most Educated”

A recent Bank for International Settlements (BIS) report revealed some insights into the characteristics of crypto investors.

The report, titled “Distrust or speculation? The socioeconomic drivers of US cryptocurrency investments”, was published by the Monetary and Economic Department of the BIS. The institute was established in 1930 and is based in Switzerland. Its aims are “to serve central banks in their pursuit of monetary and financial stability, to foster international cooperation in those areas and to act as a bank for central banks.”

This paper aimed to “examining the hypothesis that cryptocurrencies are sought out of distrust in fiat currencies or regulated finance." It also wanted to “study the broader socioeconomic characteristics of U.S. retail consumers and disentangle the role of knowledge acquisition and investment decisions conditional on knowledge."

The report revealed that higher educational attainment is associated with more knowledge about and the likelihood of owning a cryptocurrency. It also found that the owners of ETH and XRP are the most educated in our sample, followed by Bitcoin Cash and Bitcoin users. Conversely, those owning Litecoin are the least educated.

One of the paper's authors, Dr. Raphael Auer, took to Twitter to share some charts and insights. 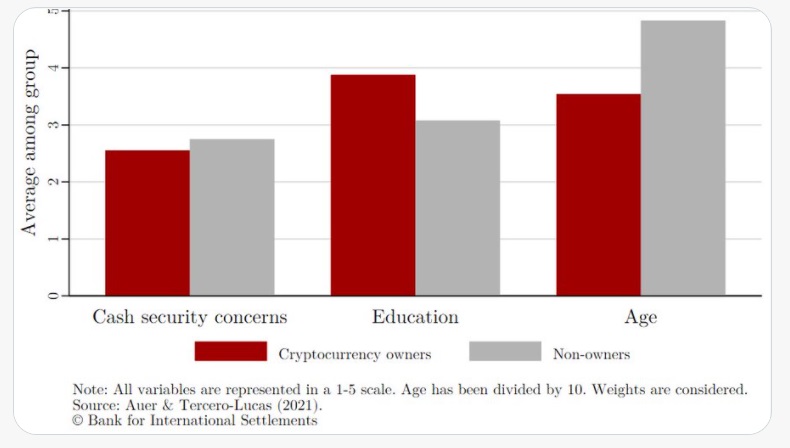 "#Cryptocurrency investors tend to be young, educated and high-income, are likely to have experience of using digital finance but do not seem motivated by distrust in fiat currencies or regulated finance."

The upside potential for Ripple price is severely limited by the 20-day SMA and 50-day SMA. A confluence of these two levels is robust enough to prevent further growth. Repeated rejections could see XRP drop to the $0.545 support wall and the RSI will drop to the oversold territory.