The Shiba Inu price started the current week in the red, as the price registered a marginal drop. SHIB has been quite bearish since it surged by over 64% on the 27th, slipping below the 20-day SMA during the previous week. SHIB had dropped over 7% on Friday, as the price fell to $0.000041. The price dropped further on Saturday as it registered a drop of 1.28% before rising by 2.83% on Sunday and settling at $0.000053.

The Shiba Inu price has been quite bearish and started the previous weekend in a similar vein, as the price dropped by over 6% on Saturday and a further 2.93% on Sunday to settle at $0.000056. The week started in a similar fashion, as SHIB continued to drop on Monday, falling by 3.04% and settling at $0.000055. Tuesday saw SHIB register a minor drop, as the price fell by 0.60% to slip below the 20-day SMA. The price fell further on Wednesday, falling by over 8% and settling at $0.000050. 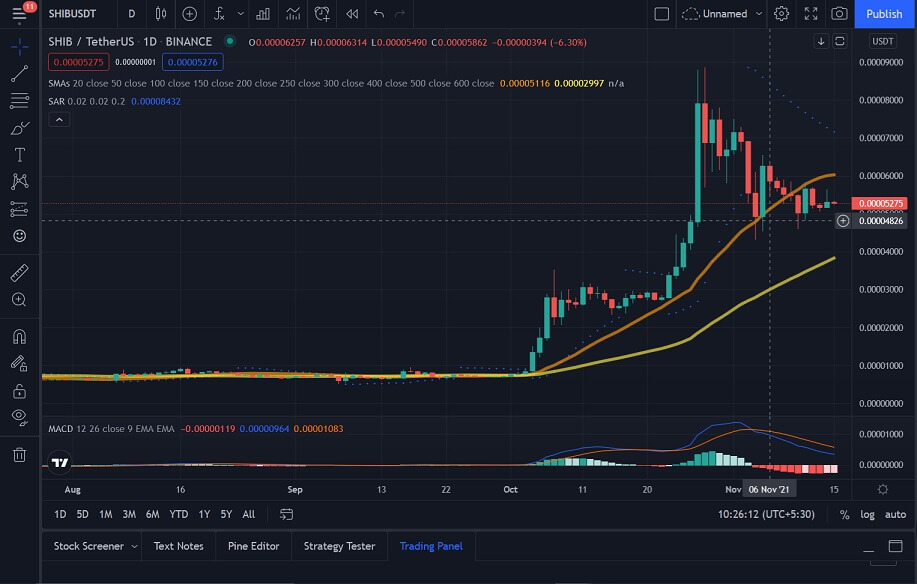 After dropping by over 8% on Wednesday, the Shiba Inu price pushed up on Thursday, as SHIB pushed up by over 12%, rising to $0.000056, before dropping by over 7% on Friday and settling at $0.000052. The weekend saw the price continue to drop, as SHIB registered a drop of 1.28% on Saturday before recovering on Sunday and rising by 2.83% to settle at $0.000053. The current session sees SHIB down marginally, and with the Parabolic SAR and MACD both bearish, we could see the price drop further.

Looking at IntoTheBlock’s IOMAP for the Shiba Inu price, we can see that SHIB faces strong resistance at around $0.000055. At this price level, more than 24,000 addresses have sold over 28,153 billion SHIB.

Looking at the 4-hour Shiba Inu price chart, we can see that SHIB had dropped to $0.000046 on the 5th, before pushing up drastically and rising to $0.000062. However, the price turned bearish after reaching this level, as it dropped to $0.000054, slipping below the 20-bar SMA. SHIB fell further from this level, as the price dropped to $0.000049, before pushing up to $0.000056, as the price pushed above the 20 and 50-bar SMAs. The price could not stay at this level and dropped back below the 20 and 50-bar SMAs to its current level of $0.000052. We can see that the MACD and Parabolic SAR are bullish, indicating that the price could increase. However, if the price drops, we could see them flip to bearish. 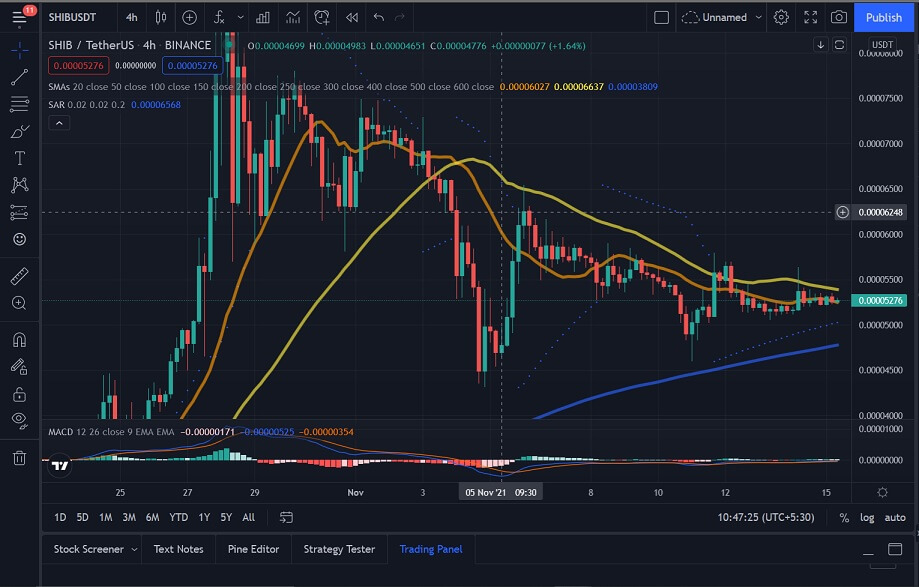 SHIB To Be Listed On CoinDCX

Cryptocurrency exchange CoinDCX recently announced it would list Shiba Inu (SHIB) on its retail-friendly CoinDCX Go app. With this, it has become the latest major trading platform to embrace the leading meme coin.

Before that, SHIB was available on the platform in trade-only mode on professionally-oriented CoinDCX Pro. In August, CoinDCX became the first cryptocurrency company in India to reach unicorn status after raising $90 million during a funding round spearheaded by B Capital, a venture capital fund created by Facebook co-founder Eduardo Saverin.

It aims to onboard 50 million users after reporting 3.5 million customers three months ago. Per earlier reports, ZebPay, the oldest crypto exchange in the country, added support for Shiba Inu roughly one month ago.

Despite its rapid growth, India's cryptocurrency sector remains plagued by a lack of regulatory clarity. Reserve Bank of India Governor Shaktikanta Das recently reiterated his concerns about the cryptocurrency industry.

The Indian government is expected to pass a modified cryptocurrency bill at the start of the winter session. Meanwhile, AMC Theatres CEO Adam Aron recently confirmed that the movie theater giant will add Shiba Inu as a payment option.

Looking at the Shiba Inu price, we see that SHIB has been quite bearish over the previous week. If the current sentiment persists, we could see SHIB drop to $0.000050.