Shiba Inu has been in consolidation above critical support at $0.00000615. Attempts to break out on the upside and perhaps resume the uptrend aiming for $0.00001 have been unsuccessful, especially with a descending trendline standing in the way.

At the time of writing, the meme coin that branded itself a "Dogecoin killer" trades at $0.00000621. The four-hour chart has limited its immediate upside under the 50 Simple Moving Average (SMA). A correction is currently underway, which leaves the key support at $0.00000615 in jeopardy.

SHIB is trading at the apex of a descending triangle on the four-hour chart. The price tends to move into a tighter range, highlighting a more harrowing battle between the bulls and the bears.

The descending triangle is viewed as a continuation pattern in technical analysis. Traders confirm the formation of a triangle following at least touches of the support (x-axis) and resistance (hypotenuse).

The descending trendline shows a bearish building momentum while the x-axis illustrates support that sellers cannot seem to break. Often the price eventually slides below this support and continues to drop.

Realize that there are instances when this anchor is too strong; hence the price rebounds, invalidating the descending triangle. In this case, Shiba Inu will avert the potential losses to $0.0000054

Meanwhile, Shiba Inu is moving closer to the x-axis support again. If the price closes the day below this level, massive declines are bound to follow. As illustrated, triangles have exact breakout targets equal to the distance between the highest and lowest points, explaining the 11% breakout target. 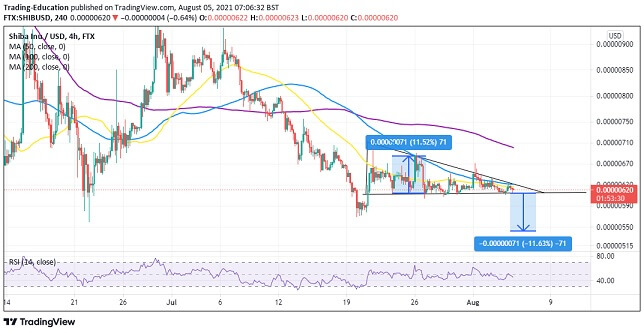 The Moving Average Convergence Divergence (MACD) indicator is also stuck in the negative area. A minor sell signal exists to emphasize the growing bearish dominance. Shiba Inu's recovery will be a hard nut to crack if the technical picture stays unchanged while declines continue to brew.

The exact timeframe highlights another bearish outlook signal presented by the Parabolic SAR. This technical tool follows the trend of an asset like a moving average. However, it foresees the direction of the trend, thus sending signals to buy or sell the asset.

Since the parabolas (dots) switch above the price at the beginning of the week, the call to sell has been sustained. However, the dots are very close to each other, implying the bearish pull on Shiba Inu is not very strong. Perhaps, a break under $0.00000615 will validate the predicted downswing.