The Shiba Inu price posted a strong recovery on Thursday, as the price recovered to rise by over 12% and settle at $0.000056. SHIB has been quite bearish since the start of the week, registering a drop of over 3% on Monday. The price continued to drop on Tuesday, as it slipped below the 20-day SMA and then fell to $0.000050 on Wednesday. However, SHIB made a strong recovery on Thursday, rising to $0.000056 before falling back into the red during the current session.

The Shiba Inu price started the previous week on a fairly positive note but fell back on Tuesday as it dropped to $0.000069. The price continued to drop on Wednesday, falling by almost 20% and settling at $0.000055. The price continued to drop on Thursday, falling to $0.000049, where the 20-day SMA acted as support, but made a strong recovery on Friday, as it rose to $0.000062. Despite the bullish session on Friday, SHIB fell back over the weekend, as the price dropped by over 6% on Saturday and almost 3% on Sunday to end the weekend at $0.000056. 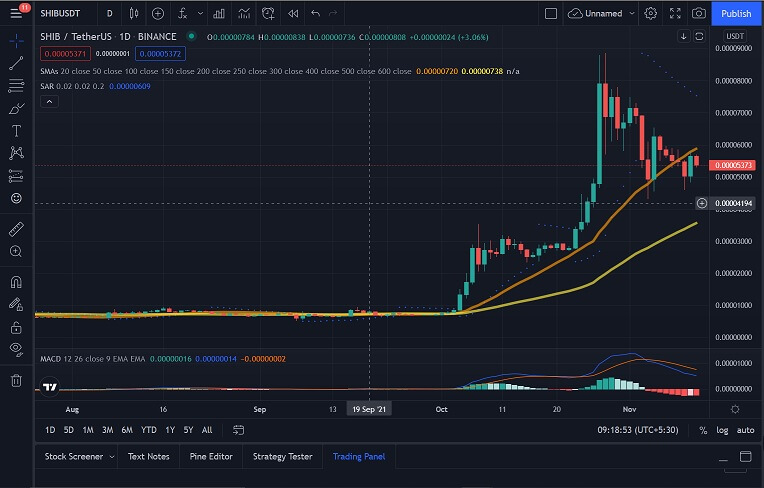 The Shiba Inu price fell to $0.000056 over the weekend and continued to drop on Monday as the week got off to a bearish start. SHIB fell by over 3% on Monday and then slipped below the 20-day SMA on Tuesday, dropping to $0.000054. The price continued to drop on Wednesday as sellers pushed the price down by over 8%, as SHIB settled at $0.000050, before posting a strong recovery on Thursday, pushing the price up to $0.000056. The current session sees SHIB back in the red, and with the Parabolic SAR and MACD both bearish, we could see the price drop further.

Looking at IntoTheBlock’s IOMAP for the Shiba Inu price, we can see that SHIB faces strong resistance at around $0.000055. At this price level, over 17,000 addresses have sold more than 28,265 SHIB.

The 4-hour Shiba Inu price chart shows us that SHIB had dropped to $0.000044 on the 4th. The price made a strong recovery from this level, as it surged to $0.000062, pushing above the 20-bar SMA. With the 20-bar SMA now acting as support, the price only dropped marginally and was able to maintain this level until the 8th, when sellers pushed the price below the 20-bar SMA. SHIB dropped to $0.000054 and then fell further to $0.000049 before making a strong recovery and rising to its current level of $0.000053. We can see that the Parabolic SAR and MACD have both flipped to bullish. However, if the price drops, we could see them flip to bearish. 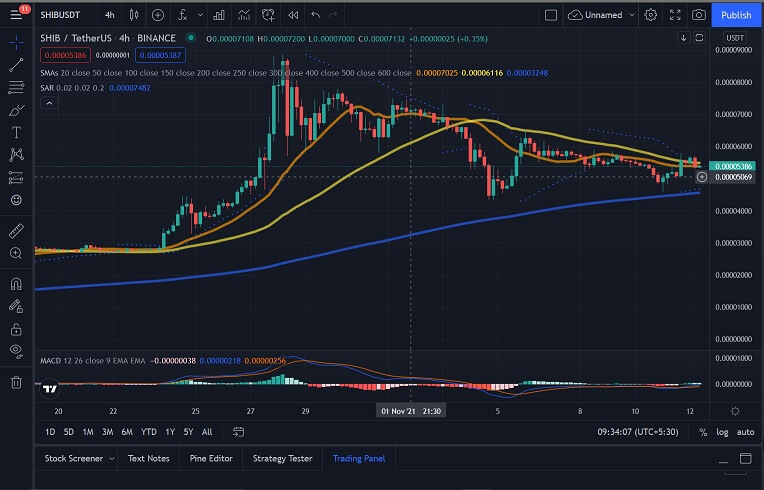 SHIB Volatility Wipes Out Over $7 Billion Within One Week

Meme cryptocurrency Shiba Inu (SHIB) continues to undergo a week of heightened volatility losing $7.26 billion from its market cap over the period. On November 3, the market cap was at $35.14 billion. It plunged to $27.88 billion recently.

Various factors have initiated the coin’s correction. However, whale activity is speculated to be the main trigger for the drop. The volatility emerged early last week after a whale made four transactions of ten trillion (10,000,000,100,000) SHIB to four different wallets. At the time, a single transaction was valued at around $586 million.

Notably, SHIB is potentially staring at further correction considering that most of the cryptocurrency market is rallying led by Bitcoin. Over the recent weeks, the token has witnessed an increased inflow of capital that contributed to the all-time high.

Furthermore, if the inflows into the token came from other cryptocurrencies, then SHIB might experience further outflows as investors aim to cash in on other rallying assets.

Generally, the coin’s current price movement contrasts last month’s status when it surged 300%. At some point, SHIB even overtook Dogecoin and became one of the top ten cryptocurrencies by market cap. However, Shiba Inu is still making headlines despite the short-term correction, with more investors potentially aiming to buy at the new low prices.

The Shiba Inu price chart shows us that SHIB had fallen by over 4% during the current session, after encountering strong resistance at $0.000055. If the price continues to drop, we could see SHIB drop to $0.000050.