Solana is trading in the green after holding above short-term support established at $34. The uptrend has also jumped above $40, a move that will likely trigger massive buy orders as investor sentiment grows.

Meanwhile, SOL is trading at $40.6 and grinding toward a potentially massive technical breakout. Note that the four-hour chart shows the formation of an ascending triangle with a breakout target of 58%, capable of swinging Solana to $70.

Will Solana’s bullish outlook yield to the colossal upswing?

The rising trend line shows that bulls are getting stronger as the price forms a higher low pattern. Finally, a breakout is anticipated at the x-axis, paving the way for a rapid upswing.

As the ascending triangle forms, the market generally consolidates, but the volume increases abruptly following a break at the x-axis resistance. Triangles have exact breakout targets measured from the highest to lowest triangle points, as illustrated. 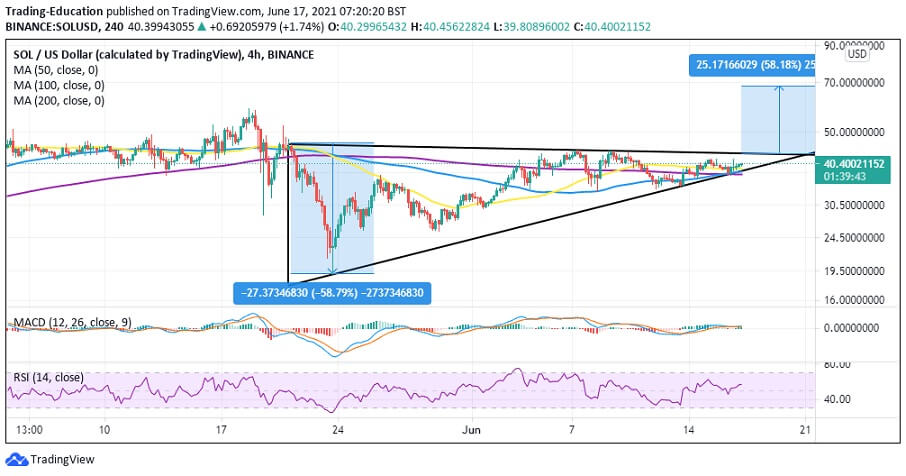 Subsequently, the bullish outlook also comes from some of the applied short-term technical indicators, such as the Moving Average Convergence Divergence (MACD) indicator and the Relative Strength Indicator (RSI).

The MACD recently crossed above the zero line, which is a massive bullish signal. Simultaneously, the MACD line has moved above the signal line, adding credence to the bullish outlook.

Similarly, the RSI shows that buyers have more influence amid their increased aggressiveness on overcoming the hurdle at $40. Therefore, the slightest resistance path is upward, based on these short-term technical tools.

Solana must close the day above $40 to ascertain the validity of the uptrend. The 50 Simple Moving Average (SMA) reinforces this support. If SOL slips under it, sell orders may soar, leading to declines toward $30. Other support levels include the triangle x-axis, the 100 SMA, the 200 SMA, and the buyer congestion at $ 34.