Solana Price Prediction: SOL's 95% Rally From the May Crash Sets the Pace for Impending Takeoff to $52

Solana bulls are building momentum for the ultimate breakout above $40. The recovery from the downswing to $18 in May left many investors bleeding. However, SOL has gained significantly and may soon shrink the gap heading to the all-time high of $58.

Solana banks on the ascending triangle pattern to spike past $50

The four-hour chart shines a light on a matured ascending triangle. This pattern is extremely bullish and is used by traders to identify trend continuation and perhaps reversals. Note that as the triangle forms, the asset embraces consolidation.

According to Investopedia, the rising trend line signifies an aggressive bullish camp amid a weakening bearish front. However, traders must be aware of the resistance at the horizontal trend line. Breaking above this key level completes the ascending triangle, marking an uptrend.

It is worth mentioning that triangles have precise breakout targets whose distance is measured from the highest to the lowest points, as illustrated on the chart. As for Solana, the x-axis resistance is already in the rearview, implying that the journey to $52 has begun.

It is worth keeping in mind the hurdle at $40, reinforced by the 200 Simple Moving Average. Bulls must bring this barrier down to validate the upswing toward $40. Meanwhile, Solana's immediate downside is protected by the ascending triangle's a-axis, aided by the 100 SMA.

The path with the slightest resistance is upward, as confirmed using the Relative Strength Index (RSI). This is a technical indicator tracking the trend of the asset while measuring its strength. The sharp lift to the overbought region is reminiscent of the growing bullish grip. Therefore, it is imperative for bulls to stay in control during the upcoming sessions.

The TD Sequential indicator has flashed a sell signal on the two-hour chart. This call to sell manifested in a green nine candlestick, inferring that buyers are likely to lose momentum. It can also be interpreted to mean that sellers are becoming aggressive. 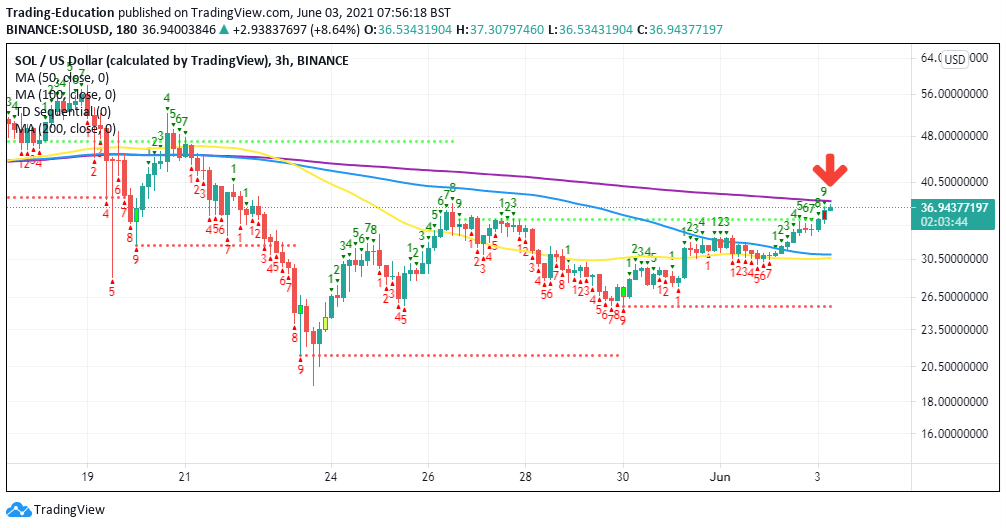 The call to sell is confirmed when the ninth and eighth candlesticks close above the sixth and the seventh. Note that most of the sell signals in the recent past have been confirmed, leading to considerable declines, and calls for caution when trading Solana.

SOL
Solana
Top Brokers in
All Regulated Brokers
67% of retail clients lose money when trading CFDs with this provider.