Stellar Lumens can make exchanges between any currencies, digital or fiat, and offers low fee transactions for sending money. The native coin of the Stellar Lumens system is Stellar and the token code is XLM.

Stellar Lumens experienced a large amount of early success when it entered the cryptocurrency market. It launched in July 2014 with a staggering 1B Stellar coins. Stellar also received early support in the shape of investment from Stripe and its CEP Patrick Collinson who put up $3M to further the Stellar Lumens protocol.

All of this activity and support drew investors attention to Stellar Lumens and there have been great profits seen previously for Stellar Lumens investors. For those currently considering adding Stellar Lumens to the decentralized finance (Defi) corner of their portfolio, there is a lot to consider. In 2021 investing in Stellar Lumens could lead to substantial profits in the coming months and years.

If you want to buy XLM quickly and easily, with 0% Commission, check out eToro Exchange!

Stellar Lumens was founded by Jed McCaleb and Joyce Kim. The Stellar Development Foundation oversees the operation of Stellar Lumens. This was also created by McCaleb and Kim to push forward the technological advancement of the company. The collaboration and support of financial software development company Stripe gave a start-up donation to help Stellar Lumens to hit the ground running.

The Stellar Development Foundation produced a new algorithm for the system and released it in 2015. That April the improved consensus algorithm went live, using the Stellar Consensus Protocol (SCP) which was developed by Prof. David Mazières of Stanford University in the US.

This expansion has been great news for investors and users alike as it has pushed forward market adoption and publicised the Stellar Lumens brand within the Defi sector and beyond.

Read Also: Is Stellar A Good Investment And Should I Invest In XLM?

2015 - Stellar partners with the Praekelt Foundation in South Africa in order to integrate with their messing system called Vumi. This allowed Vumi mobile phone minutes to be charged using the Stellar Lumens system.

Over the course of 2016 two more mobile phone charging systems were set up. One was in the Philippines and the other throughout Africa. ICICI Bank in India also started adopting Stellar Lumens technology, as did French company TMT.

2017 - Both IBM and KlickEx adopted Stellar Lumens protocols to fuel transactions between countries in the South Pacific. These incorporate both centralised and decentralised financial exchange. SureRemit in Nigeria also began using Stellar Lumens software on their platform in 2017.

2021 - One of the most high profile adoptions for Stellar Lumens was with the Ukrainian Ministry of Digital Transformation to improve Ukraine’s technological systems.

These significant points on the Stellar Lumens timeline have led to significant boosts in share price. The 2021 advancement led to a 40% price increase and as market adoption continues to grow this is excellent news for current and new investors in Stellar Lumens.

Stellar has benefited hugely from the 2021 Defi boom that has seen surges in cryptocurrencies throughout the sector. Stellar had previously suffered reduced success, after its strong first few years on the market. During 2019 and 2020 Stellar had been stuck in a sideways trading pattern at a low price point of $0.07, so the upswing in 2021 was a needed turnaround for Stellar. 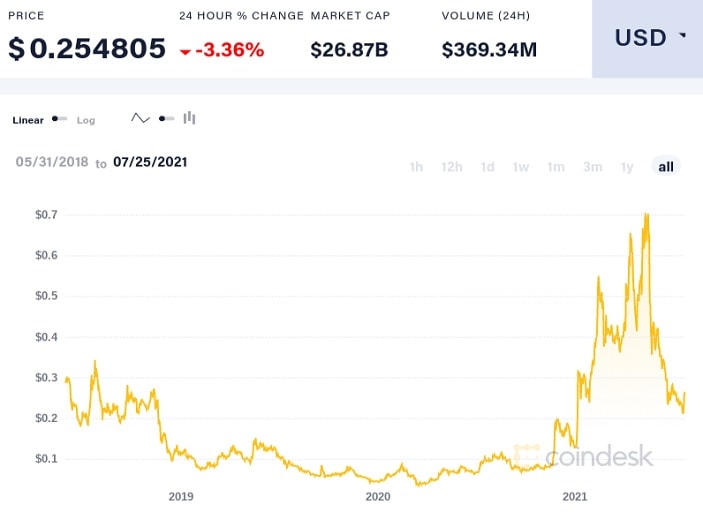 Now that 2021 has seen a three-step rise in Stellar’s coin price, followed by a double peak, XLM is back in a better position. 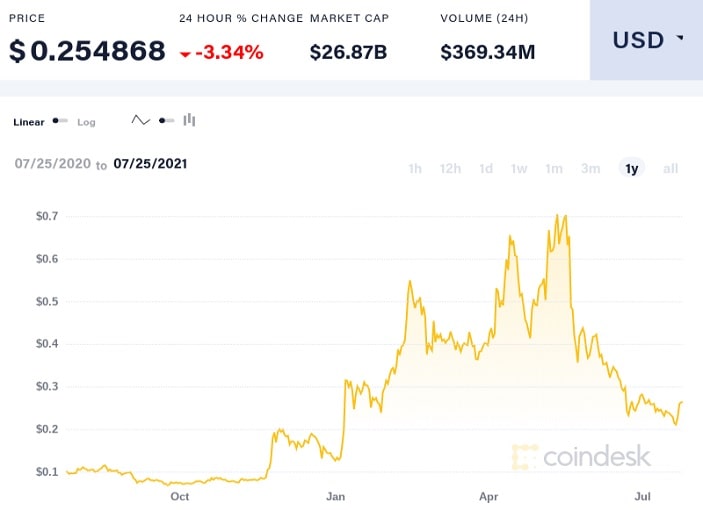 At its highest point XLM has stood at $0.87 and in May 2021 it was returning to the $0.70 mark. However, despite the excellent returns for investors in the first half of 2021, the bull run tailed off during the last two weeks of May and followed a downward trajectory. 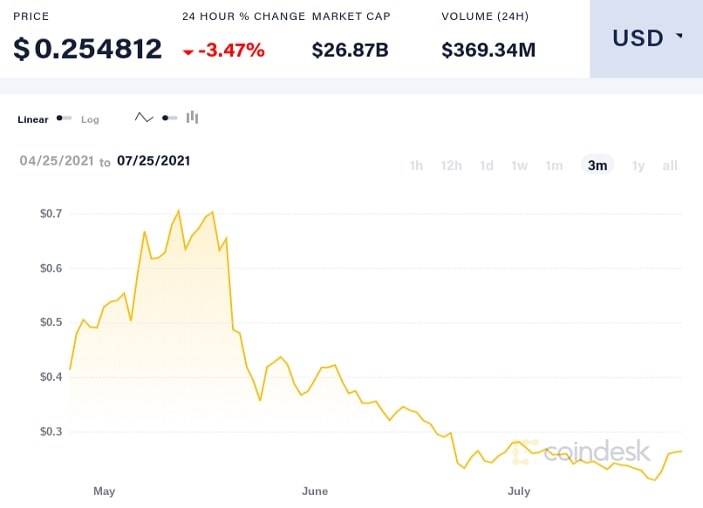 July has seen slower losses than were seen in June, and the XLM price seems to be stabilising in the $0.25 area. Also, the dramatic downturn appears to be coming to an end, this is a much worse position than most investors were expecting.

The previous projections expect to see XLM break past the $1 line before the end of 2021. Many are still hopeful that there will be another surge in the coming months. However, this is a lot of ground for XLM to recover before those that invested towards the end of the last surge will see gains.

Check Out: What Will Stellar Lumens Be Worth In 10 Years?

Will Stellar Lumens Rebound from the Last Correction?

The bearish trading cycles across the crypto market are making it difficult to predict when the recent losses will be regained and the next upward trend will begin. The downturn throughout June and July has cast panic into the Defi sector.

However, these volatile trading cycles are characteristic of the crypto market. It appears that Stellar will not drop significantly at this point, however, the build back up to the previous all-time high could be a slow one.

Stellar is still performing significantly better than during its previous low during the resistance period of 2019 and 2020. Given that this was prior to the surge in 2021, it stands that the next surge should be significantly higher, given the better starting position. This is a positive sign for Stellar’s recovery during 2021 and early 2022, if the bearish trading period ends, allowing the upward momentum to return.

As Stellar Lumens’ adoption is growing consistently and the company is in a period of expansion it is likely that Stellar Lumens will recover from this correction. The subsequent downward spin during 2021 is recoverable during the next positive trading cycle and the outlook is positive for XLM despite the current trends.

Stellar is up 102% this year to date, despite the losses of June and July, leaving previous investors in a respectable position. The latest movements are showing upward movement which is a positive sign for recovery over the next month.

Predictions for Stellar Lumens in 2021 and Beyond

Stellar has kept up positive momentum in difficult times. Despite the tough period for the Defi sector which has most crypto coins showing substantial losses over the last two months, Stellar is expanding. The Stellar Development Foundation is extending a huge number of grants to technical development projects and focusing on pushing market adoption. This week SDF released this call out:

‘Submissions for the Stellar Community Fund are due 8/22! This is an opportunity to kickstart your Stellar-based project and connect with a thriving community. Here are 10 tips for success’

This comes alongside their continued expansion into projects and services throughout the African continent. With this increased adoption the coin price would recover more quickly and remain more stable. As Stellar Lumens continues to make a name for itself in Fintech, the possibilities for future growth are expanding which is excellent news for current and new investors in XLM. Predictions are signalling that there will be a slow recovery over the next three months, with a surge likely as 2021 moves into 2022.

Experts are expecting XLM to remain above the $1 mark throughout 2022, which would provide good returns for those investing now in 2021. The Stellar pattern should continue to cycle through surges and dips in 2023 however it is predicted that XLM will achieve at least $2 by 2024. Faster expansion is possible given the rapid growth of the Stellar Lumens network.

The financial exchange capabilities of Stellar Lumens has placed this cryptocurrency in a good position going forward. The forecast over August is likely to be steady, with either sideways trading or a further small dip in price. After this point XLM should start to build up its price again, creating an upward curve during the final quarter of 2021.

It is unlikely that XLM will exceed its current all-time high of $0.87 during 2021. The coin should increase and if the bullish trading seen earlier in the year returns then those investing at the current price should see sizable profits. However, it is unlikely that a steep surge will occur until after 2021.

The potential for scalability is huge with XLM and the coin should recover well from the recent bearish trading. However, it is very likely to be a slow incline during the remainder of the year.

Could Stellar Be A Millionaire-Maker Coin?

Should You Buy Stellar XLM?

Why Stellar Lumens (XLM) Is So Cheap?

Who is behind Stellar Lumens?

The two founders of Stellar Lumens are Jed McCaleb and Joyce Kim. McCaleb is an American programmer and entrepreneur who was previously involved with the cryptocurrency Ripple, before starting Stellar Lumens. Kim had previously been a lawyer, before deciding to co-found Stellar Lumens with McCaleb.

What is Stellar Lumens?

Stellar Lumens is a protocol for currency exchange and transfer that has the native coin Stellar and is hosted on GitHub. The protocol is open-source and decentralized and has its own consensus protocol called the Stellar Consensus Protocol (SCP).

Stellar uses multiple servers to run its software and they connect to one another through the internet. All servers store the details of the transactions made on their ledger and all of these server validator nodes are controlled by the Stellar Development Foundation. There is no mining involved in Stellar Lumens’ cryptocurrency system because of the SCP system used.

How does Stellar Lumens compare to the market?

Stellar Lumens is competing extremely well in the crypto market, with a ranking of 18th largest by market capitalization. The coin’s performance has been strong overall since its entry into the market in 2014 and the recent high of $0.87 has brought XLM close to the $1 mark.

With a current market cap of $26.8B, the opportunity for scalability is particularly large with Stellar Lumens. The Stellar Lumens Foundation has pushed the organisation forward into a very good position. They are a respected form of making decentralized exchanges and are performing well in both the Defi sector and the cryptocurrency market.

Should I invest in Stellar Lumens in 2021?

Although some investors have been put off of the crypto market given the recent poor performance, this is a surprisingly good time to invest. XLM has now begun to stabilise around the $0.30 mark, making it an extremely cheap investment. This is a particularly good investment choice given the huge scalability potential and the minor upswing which signals an impending upward trajectory.

Those who invest in XLM now, before the upward momentum carries the price higher stand to see large returns on their initial buy-in. Stellar Lumens is more stable than many of the other top twenty cryptocurrencies and is likely to lead to gains without the same level of volatility.

Is Stellar Lumens still going to go up?

Stellar Lumens is very likely to go up from its current price of $0.25 at the time of writing. The current price of XLM is much lower than expected for this point in the year and is predicted to rise steadily towards $1 in the last quarter of 2021 and the start of 2022.

The next surge is unlikely to be large enough to take XLM above $10, however, there are substantial gains to be made without an expensive initial investment cost.

During the last quarter of 2021 XLM is likely to rise to between $0.50 and $1. The lower estimates are predicting an extremely slow upward climb for XLM. However, there are signs that the surge in 2022 will take the price closer to the $2 mark, before the correction.