Sushi has been one of the altcoins that gracefully dealt with massive losses across the market in the last few days. As major cryptocurrencies such as Bitcoin and Ethereum posted double-digit losses, SUSHI stayed afloat above $20.

However, losses caught up with the decentralized token, following the correction from highs around $22 to the prevailing market value of $18. If the technical picture fails to recover, Sushi will likely stretch the bearish leg to the support at $16 and $14, respectively.

Sushi is finally bowing to the overhead pressure, endangering critical support areas such as the ascending channel's middle boundary, the 50 Simple Moving Average (SMA), and the 100 SMA on the four-hour chart.

Losing the support at $20 seems to have triggered massive sell orders and now more investors are rushing to take profit due to the fear of sinking into losses. The channel's middle boundary is the most critical support because a potential down leg to $14 may be averted entirely. 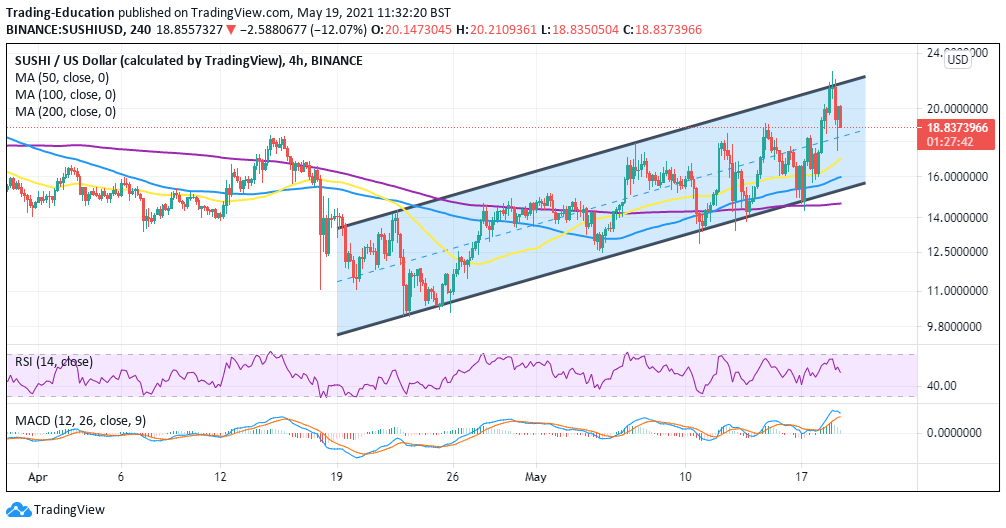 Nonetheless, the Relative Strength Index (RSI) on the four-hour chart has a bearish outlook, explaining the retreat under $20. A continued movement toward the oversold area would mean that sellers have the upper hand and that the slightest resistance path is downward.

The Moving Average Convergence Divergence (MACD) adds credence to the bearish narrative after stalling around 1.06. Declines are bound to gain momentum if the MACD line (blue) crosses beneath the signal line.

It is worth noting that closing the day under the channel's middle boundary will be a huge bearish signal. On the downside, support is envisaged at $16, as highlighted by the 100 SMA, the channel's lower edge, and the buyer concentration zone at $14.

On the other hand, closing the day within the upper column of the ascending channel will guarantee market stability which, in turn, may prevent investors from offloading their bags. Recovery above $20 would also shift the bulls' eyes from hunting for support to achieving a record high past $22.