Sushi traded impressive May highs at $22 last week. The milestone came after a continuous push for gains by the bulls. The decentralized finance (Defi) token has made a name for rising against all odds, including the dumping by its founders.

The downfall from the record high was unstoppable at various tentative support levels until the buyer congestion at $6.2. With the downside secured, bulls focused on recovery. The last few days have been entirely yielding for SUSHI as the token scaled the levels above $10. At the time of writing, Sushi trades at $13 after hitting a barrier at $14.

A V-shaped recovery is a recession type of pattern involving a sharp drop in price followed by a quick but sustained recovery. In a market where a V-shaped price action comes into the picture, there are no defined horizontal support and resistance levels; thus, prices fall and rise rapidly. The idea among traders is to ride the momentum until a barrier or support is encountered.

As for Sushi, the resistance at $14 could sabotage the recovery targeting $22. Moreover, if overhead pressure spikes, losses are bound to occur. Support is envisaged at $10.5, $9, and the primary anchor at $6.2. 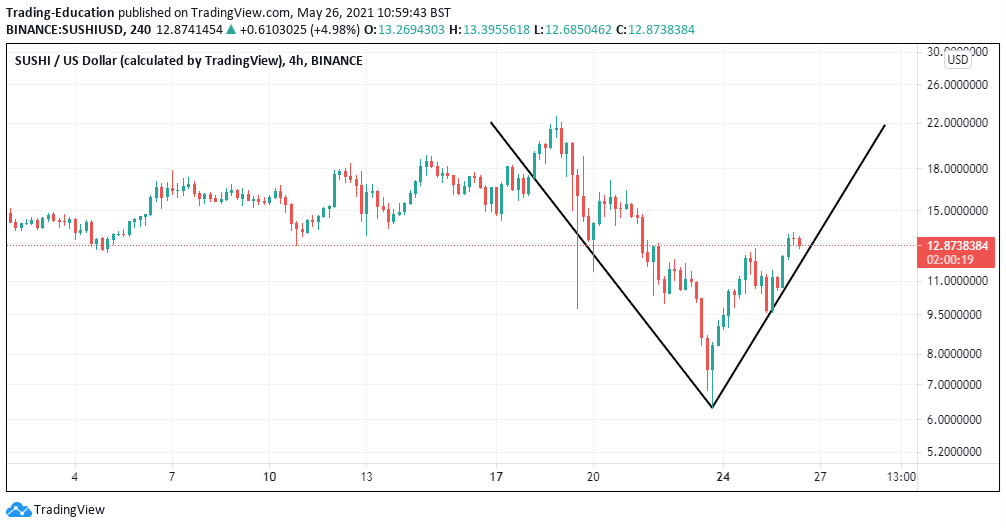 According to IntoTheBlock's In/Out of the Money Around Price (IOMAP) on-chain metric, a robust hurdle validates the unstainable V-shaped technical pattern. Note that this seller's congestion zone runs from $13.59 to $13.96. Here, around 1,400 addresses previously scooped up nearly 73.7 million SUSHI. It would be challenging to slice through this zone and extend the bullish price action to $22.

On the other hand, the support areas accorded to Sushi do not seem strong enough to stay in place longer. However, the most substantial buyer concentration zones run from $$10.91 to $11.3. Here, roughly 1,500 addresses are currently profiting from the 13.4 million SUSHI bought in the region.

As discussed, a correction is underway after the rejection at $14. However, support is expected at $11. If buyers manage to turn the price around at this level, the V-shaped recovery could be salvaged, bolstering Sushi toward the coveted $22.