Tezos joined hands with few other selected altcoins to post impressive gains following the downswing from last week’s high of around $6. Support established around $4 saw bulls tighten their grip.

An immediate recovery occurred, aided by the buyer congestion at the above support area, as was highlighted by the 50 Simple Moving Average (SMA) and the 200 SMA on the daily chart. While other crypto assets gained nursed losses, XTZ resumed the rally, dwarfing last week’s high to trade slightly above $8 and stopping short of the record highs of $8.77.

Buyers are yearning for a daily close above $8 to validate the uptrend to $10 and higher levels. Most applied technical indicators have a bullish stance, like the Moving Average Convergence Divergence (MACD).

The MACD follows Tezos’ trend measuring the momentum. Traders use the technical tool to identify precise entry and exit positions. As the 12-day Exponential Moving Average (SMA) crossed above the 26-day EMA, the odds for another leg up considerably increased. Besides, the MACD still holds in the positive region above the mean line, also a bullish sign.

According to the Relative Strength Index (RSI), bulls have the upper hand. Like the MACD, the RSI tracks the trend of an asset, but it calculates the strength. As the index consistently moves higher to the overbought, the bullish grip on the XTZ intensifies, paving the way for more gains. 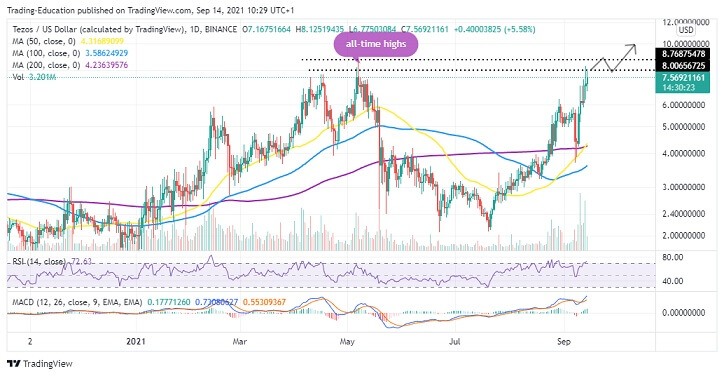 Some of the most prominent technical analysts in the industry see this pattern as one of the most definitive buy signals that could start a bull run.

The last time these moving averages formed a golden cross on XTZ’s daily chart was in February 2021. Following these bullish formations, the smart contracts token surged by over 224%. A similar scenario could currently take place with Tezos aiming for levels beyond $10.

According to Santiment’s on-chain data, an uptick in social media gave XTZ a boost to above $8. However, there was an immediate pullback, as shown on the chart below. If the chatter around Tezos remains low, it is likely the uptrend to $10 will be sabotaged in favor of a gains-trimming exercise.

Moreover, a daily close above $8 will come in handy to confirm the uptrend to $10. Overhead pressure may increase, jeopardizing support at $7 and $6, respectively.