Tezos recently shot up to a new record high of $7.7. Many investors gazed on the liftoff to $10, but a hiccup last weekend cut short the bullish outlook. Meanwhile, buyers spent this week working on securing higher support. However, the aggressive bearish wave in the market on Thursday thwarted their efforts.

At the time of writing, XTZ trades at $0.45 after bouncing from the support established at $3.8. If the technical picture keeps improving, Tezos will resume the uptrend toward $8.

Tezos Draws Nigh to a Technical Pattern Breakout

The four-hour chart brings to light a falling wedge pattern. This formation occurs amidst a downtrend and usually culminates in massive gains. The wedge is molded using two trend lines, connecting a series of lower highs and descending lows.

A breakout is anticipated before the trend lines meet and begin as soon as the price slices through the pattern’s resistance. Similarly, a rising volume confirms the upswing with a target measured from the highest to the lowest point, as illustrated.

The least resistance path is north as Tezos draws near the technical breakout. Besides, the Relative Strength Index (RSI) has bounced off the oversold region, affirming the bullish outlook. If the RSI moves closer to the midline, it will mark the beginning of XTZ’s recovery.

According to the SuperTrend indicator, bears are not quite done, and that the rebound from the support at $0.38 may be a reflex action. A sell signal has recently been flashed, reinforcing the bearish narrative. The call to sell manifested in the indicator changing to red and flipping above the price. 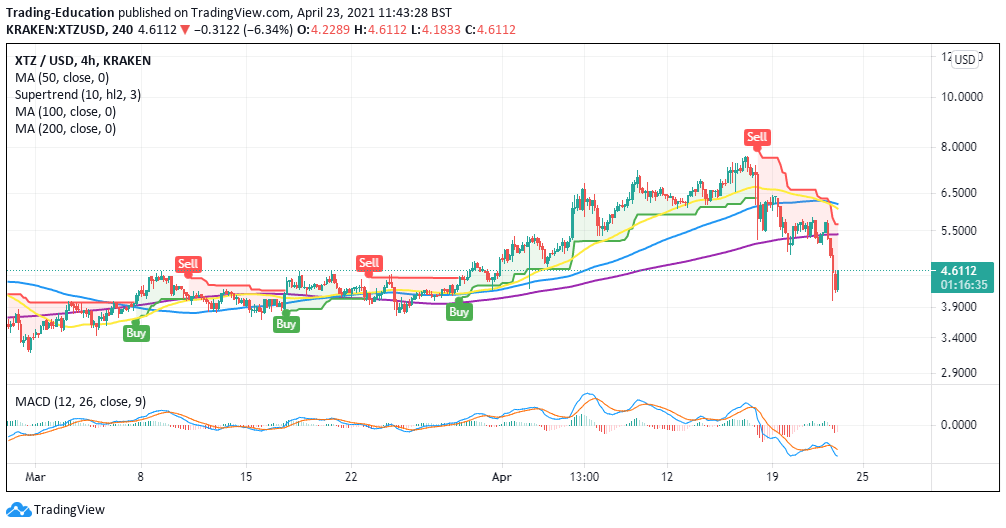 The Moving Average Convergence Divergence (MACD) indicator put the bearish outlook into perspective after sliding into the negative territory. The MACD line also crossed under the signal line, adding credibility to the downtrend.