Tezos has been consistent with the price action staged from the recent support at $3.4. The bullish grip strengthened following a break above the 50 Simple Moving Average (SMA) and the 100 SMA on the four-hour chart.

XTZ closed the gap toward $4 but stalled around $3.9. At the time of writing, a sideways trading action is underway. However, bulls seem to have the upper hand based on the short-term picture.

Tezos is a step away from launching to $5.4

The four-hour chart has a vivid bullish outlook despite the delay of around $3.9. For instance, the Moving Average Convergence Divergence (MACD) indicator affirms the uptrend following the return into the positive region.

The MACD can be used as a buy signal when the trigger crosses above the indicator line. Usually, this crossover occurs before the crossover of the moving averages on the asset's price chart.

Similarly, the MACD functions as a sell signal when the trigger crosses below the indicator line. The sell signal is advantageous as it occurs even two weeks before the crossover of the moving averages on the price chart, hence saving the trader a significant amount.

As for Ripple, the bullish signal manifested in the MACD has also been affirmed by the golden cross pattern. The 50 SMA has crossed above the 100 SMA, implying that the uptrend is still intact. 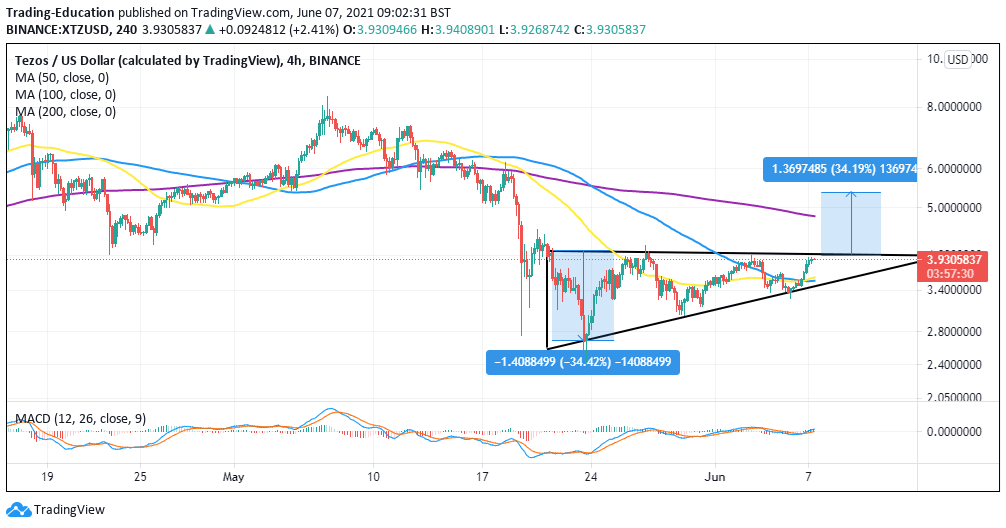 Tezos is trading at $3.92 at the time of writing, while its immediate upside has been capped under the ascending triangle's x-axis (horizontal line). The axis is drawn along the swing highs, while a rising trend line connects the higher lows.

A recent spike in buying pressure brought Tezos close to the axis but stalled at $4, as already been established. For now, XTZ may spike 34% above the x-axis based on the technical; formation. This target is determined by measuring the distance between the two highest points of the triangle and adding it to the breakout point.