The Essays of Warren Buffett: The Only Book You Need On Investing

Any studious investor will know that there is an ocean of books out there about investing and many claiming to be the best book for investing.

No one succeeds without expanding their knowledge and skills to know what actions to take at what times in their field.

Unfortunately, we can't all be bookworms with the ability to read our way through every book out there and collate the best insights for ourselves.

If you aren't an avid reader but you are keen to expand your own knowledge and gain some precious insights, then you might be looking to identify the best book for investing.

Words from the master 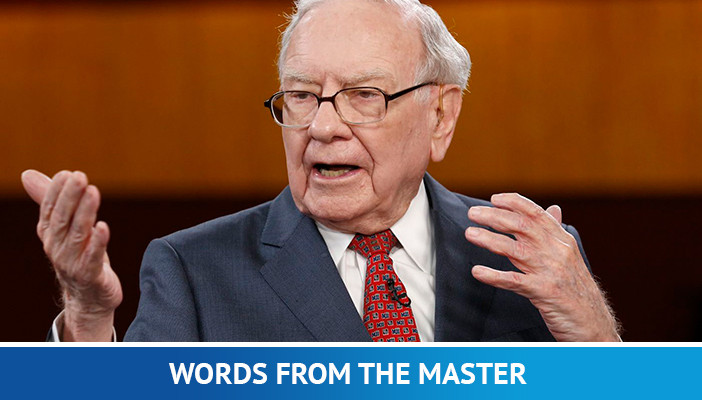 The fourth edition of The Essays of Warren Buffett book hit the shelves in 2015 with the original being published in 1999 and is approximately 300 pages.

The Essays of Warren Buffett is worth your time because it pays to learn from the absolute best there's ever been.

There aren't many people who would profess to be able to name a more successful investor than Warren Buffett.

If you don't have the time or ability to read every investment book under the sun then you might as well benefit from the fact that he has.

The passionate educator, Buffett, has gone to great effort to share everything he knows in essays that span decades of his career in investing, starting in 1979 and leading up to 2006.

The book’s title refers to “Corporate America”, but the knowledge he offers is entirely relevant to shareholders and stock traders.

He lays out a comprehensive explanation of the ongoing relationship that exists between corporations and shareholders, which gives newcomers some great insights and helps tighten up the understanding of experienced investors.

The Essays of Warren Buffett is also well-written and easy to read with Buffett adding a touch of humour here and there.

Who is Warren Buffet?

Nicknamed The Oracle of Omaha, Warren Edward Buffett is without a doubt the most famous investor of our times.

Born in Omaha, Nebraska, from an early age Buffett was interested in investing and different ways to make money, making his first investment at the age of 11.

He made his name known through Berkshire Hathaway Inc. which he became the majority shareholder in 1967.

Buffett managed to transform the failing textile company into a goliath of investing and became majority owner and minority owner of a number of businesses throughout America worth approximately $526 billion.

Today, Buffett is still the CEO and leads the company with Charlie Munger.

As of 2018, Buffett was estimated to be worth $84.5 billion and is listed on Forbes 2019 rich list as the 3rd richest person in the world after Bill Gates and Jeff Bezos.

Buffett is also known for his philanthropy, saying he will give away his entire fortune to charitable causes, 85% of which will go to the Bill and Melinda Gates Foundation. He is also well-known for his letters foundation.

Buffett is an excellent example of achieving success through consistency, gradually building up his wealth over time. He is now in his late 80s and is still hugely influential.

A lifetime of teachings 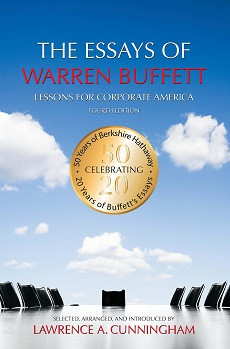 This compilation of ‘essays’ spans an unimaginably successful career that has taken more than half a century.

The way they are related conjures the feeling that you are actually sitting and having a conversation with the man himself.

The Essays of Warren Buffett is also well-received earning a 4.9-star rating on Amazon and 4.4 out of 5 on Goodreads.

It is also Buffett’s favourite investing book with his name in the title. He refers to it as “a coherent rearrangement of ideas”.

It stands as the single most important book for investing that anyone could read. If you are only going to read one book to boost your investing career, make it The Essays of Warren Buffett.

What are the book's main lessons? 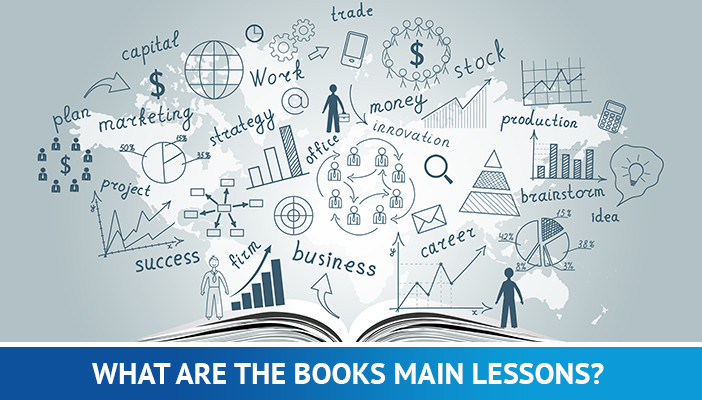 TThe Essays of Warren Buffett is divided into seven sections, each covering a different topic.

The book is also co-authored and edited by Lawrence A. Cunningham, a professor at the George Washington University School of Law.

Cunningham has arranged the book not in chronological order but by subject, which gives the book more of a feeling like a guide and less like a story of Buffett’s life.

This is great because it really helps beginners learn how to invest, putting the letters into a logical order in which to learn.

Particularly as the book covers Buffett on corporate finance and investing, mergers and acquisitions, accounting and valuation, alternatives to common stocks, accounting policy and a lot more.

Such insight into Buffett’s thought process is invaluable and help investors and traders with fundamental analysis.

Buffett also writes about his bad decisions and regrets and they are useful to learn from and can hopefully help prevent the next generation of investors from making the same mistakes.

Charlie Munger is also mentioned in parts of the book.

There are three themes that often pop up throughout the book in relation to what Buffett refers to as intelligent investing.

This relates to focusing not on the value of a stock, but instead on its intrinsic value, and the intrinsic value you put behind a stock should be well-informed by research.

Once you have an idea of the potential value of this instrument, you can compare it to its actual price and you get the ‘margin of safety’.

For a good margin of safety, investors should believe the company is well-run too.

This relates to The Buffett way and it is basically the belief that knowing your limitations you are able to free yourself of emotion. To invest the Buffett way, investors need to be disciplined.

Further to that, investors should keep things simple.

Does this investment look too complicated? If the answer is yes, Buffett advises that you should stay away from it.

Similarly, Peter Lynch once said: “Never invest in an idea you can’t illustrate with a crayon”.

In Buffet’s case, he is aware that he lacks an understanding of technology, so he avoids it, even if he sees potential.

This is true when it comes to trading as well. Keep your strategies simple!

Buffett also explains that understanding what you don’t know and accepting it is very important to succeed in investing.

Investing in what you don’t understand leaves you open to risks. Don’t ever trick yourself into thinking you understand a topic and never on that false understanding invest in something.

Mr Market is not actually a concept invented by Buffett but instead by Benjamin Graham, one of Buffet’s mentors. It is a fictionalised version of the stock market and “he” (the market) is prone to different moods.

Sometimes he is happy, sometimes he’s sad, and this impacts the value investors have put on stocks.

The lesson from Mr Market is not to let it tell you the value of something, but instead, do your own research and decide it for yourself.

Buffett mentions Mr Market throughout the book, explaining to his investors the type of mindset they need when the market is fluctuating.

You have to remember that investing is a long-term game, not a short term game. If something is truly of value, it will likely shine no matter what the market situation is like.

Buffett cares a lot about ethical trading and ethical businesses.

To him, this is important for a business’s growth. If a business is not ethically sound it will hurt its development and your investment.

What does Buffett look for in a good business? 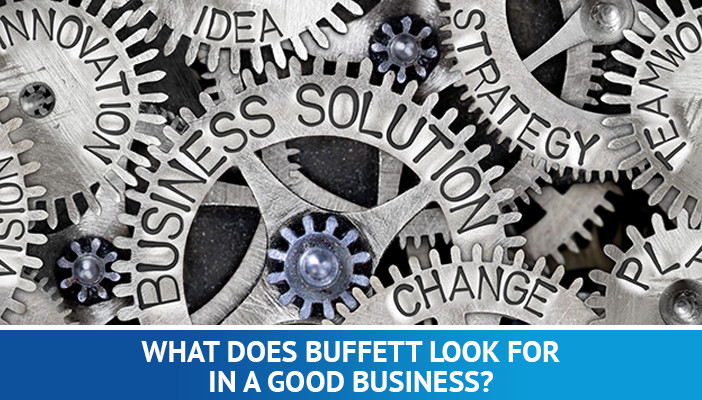 Buffett seeks to avoid buying for the short term, instead preferring the long term.

One of the main things he dislikes is making decisions based on tips from others. He believes all investments should be made based on principles

How to avoid bad investments?

Is there any room for improvement?

It’s hard to criticise Warren Buffet and The Essays of Warren Buffett is really one of the best investment books you can get, but from an educational point of view, there are a few things to bear in mind.

As mentioned above, the title The Essays of Warren Buffett is a little misleading.

The Essays of Warren Buffett is actually made up of letters from Buffett to Berkshire Hathaway’s shareholders, not essays and so don’t be surprised if it is not as academic as you initially assumed.

These letters are designed to explain to the shareholders his decision-making and the company’s potential outlook.

When it comes to the analytical side of Buffett’s letters, a lot isn’t actually written by Buffett but instead by Lawrence Cunningham and so you are relying on his interpretation of Buffett.

Further to that, it is worth mentioning that Buffett does actually write the prologue and Cunningham writes the epilogue.

If you are looking to focus solely on what Buffett has written, you can skip Cunningham’s writing.

Another crucial thing to mention is that some critics question the point of publishing the letters as a book when they are all available on the Berkshire Hathaway website for free.

While that is a good point, the book puts them into perspective and logical order.

The book is also geared towards more experienced investors, who already have some background knowledge of the topics and who are able to decipher the information. It is perhaps not the best investment book for beginners.

Others have criticised that because the book jumps from different topics instead of running chronologically and there is no context for the current market when the letter was written.

Indeed this would be useful to have because as times change, so do investors’ opinions on the market and what is good to invest in.

Different times, different businesses, and different market situations can make it harder to take lessons from the book and apply them to the modern world.

Check out more of the best investment books here.

To acquire the vast knowledge of an investor such as Warren Buffett can take a long time. In his case, almost 80 years in the making.

While we at Trading Education cannot promise such a transformation over a short period of time, we can certainly speed up the process by teaching you all you need to know.

On our Free Trading Course, you will learn the following:

If you enjoyed reading The Essays of Warren Buffett: The Only Book You Need On Investing from Trading Education, please give it a like and share it with anyone else you think it may be of interest too.