Bitcoin price hit areas above the stubborn resistance at $40,000 but failed to clear the seller congestion at $40,000. At the time of writing, the largest crypto asset by market capitalization trades slightly above $39,000 while bulls rush to defend higher support.

Meanwhile, the market is back to green, led by significant crypto assets. Ethereum is up 5.3% to trade near 2,500, while Ripple teeters at $0.87 after growing by 4.3% in the last 24 hours. Some of the most improved altcoins include Chainlink, Uniswap Theta Network, Aave, and Amp.

The recovery across the market comes when cryptocurrencies are gaining traction with many governments around the world. For instance, the Tanzanian government has urged the central bank to consider developing the cryptocurrency sector, setting the framework for a central bank digital currency (CBDC).

Last week El Salvador became the first nation in the world to accept Bitcoin as a legal tender. This move elevated Bitcoin to higher status and set the ground for other countries to do the same.

Bitcoin almost brushed shoulders with $40,000 earlier but lost momentum. A correction is underway, with the bellwether cryptocurrency dropping to $39,000. If the 200 Simple Moving Average (SMA) is lost as support, traders can anticipate another drop, perhaps to $38,000.

The bearish outlook has been made worse by the CME Bitcoin futures gap that formed between the close on Friday of $37,325 and Monday’s open of $38,900. In other words, Bitcoin may drop to $37,325 in an attempt to close this gap before resuming the uptrend.

Note that filling this gap is not technical but psychological. Traders had filled more than 90% of CME gaps in the past before the uptrends resumed. Hence, the mounting fears of a possible bull trap. 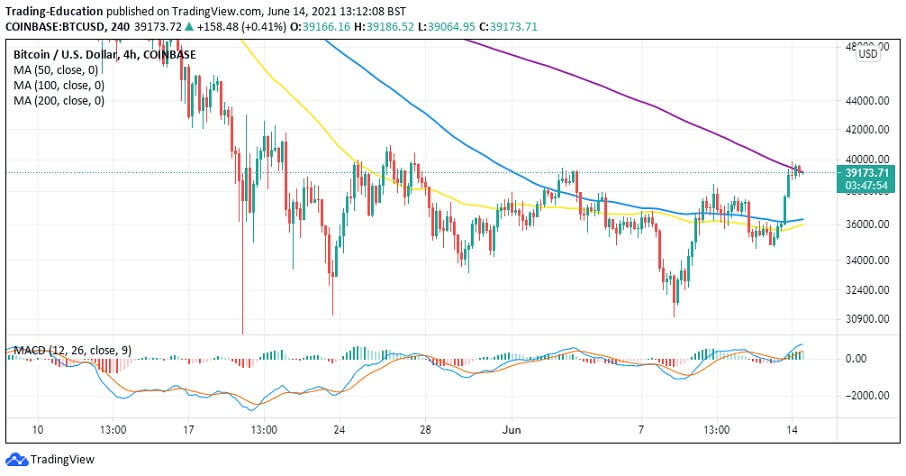 Ethereum hunts for a path to a 34% breakout

Ethereum is still stuck under $2,500 despite over 5% in gains accrued in 24 hours. The pioneer altcoin has been forced to bow to the selling pressure highlighted by the 50 SMA, and by extension, the 100 SMA.

For instance, the 50 SMA recently crossed under the 100 SMA, hinting at an extended downtrend. If the immediate 50 SMA hurdle remains intact, Ether will likely drop to $2,400 and perhaps retest the support at $2,100 before an uptrend renews. 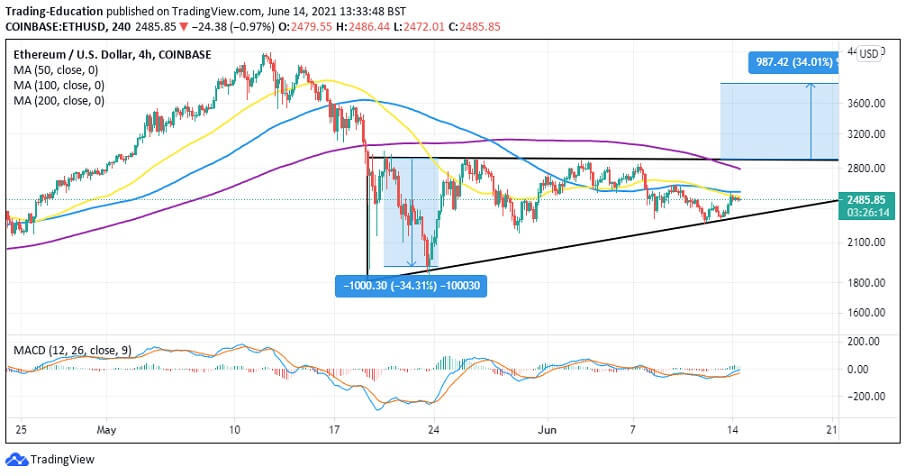 The MACD has a bullish outlook on the flip side based on its return into the positive region. Moreover, the MACD line’s divergence above the signal line is a bullish signal, likely to call more buyers into the market.

Check Out: Why Ethereum Will Skyrocket

Ripple could soon plunge to $0.5

Ripple trades at $0.86 amid the struggle to overcome the resistance at $0.9. The 50 SMA on the four-hour chart also contributes to the overhead pressure. Hence, recovery will be an uphill task for the bulls in the near term.

On the other hand, a descending triangle reveals that XRP could drop to $0.5 if the x-axis (horizontal support) is shattered. Descending triangles are bearish and have precise breakout targets measured from the patterns’ highest to lowest points. 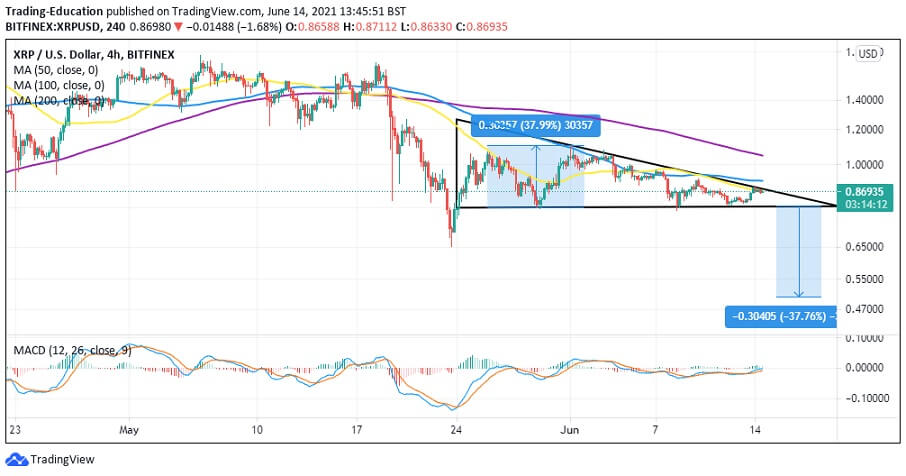 Meanwhile, support is expected at $0.8 and $0.65, respectively. Holding firmly to these areas would allow bulls to focus on recovery missions. Besides, the MACD has a bullish impulse shown by the MACD line (blue) widening the gap above the signal line. The bullish outlook will grow more potent if the indicator settles above the zero line.