Cryptocurrencies are back in the green after a mid-week retrace. It is almost certain that the weekend session would be welcomed in style. The latest darling of the market, Binance Coin, has sprung to another new all-time high around $436. Earlier, our conservative prediction placed BNB at $450, but this could go higher, perhaps hit $500.

Bitcoin seems ready for breakout after bouncing off support at $55,400. As technical resistance weakens, it becomes apparent that the next break above $60,000 could elevate Bitcoin as close as possible to $70,000.

Ripple has settled above $1 in the wake of the recent slump to $0.85. Despite the ongoing court fight with the Securities and Exchange Commission (SEC), XRP looks poised for an upswing to $2.

Similarly, Ethereum has reclaimed the position above $2,000 after confirming support at $1,930. Trading above the recent high at $2,146 will likely catapult Ether toward a new all-time close to $2,500.

The largest cryptocurrency teeters at $58,500 at the time of writing. This follows a breakout from a descending parallel channel—the liftoff from the support at $55,400 allowed more buyers to enter the market.

Meanwhile, the Moving Average Convergence Divergence (MACD) reveals that the slightest resistance path is upward. The MACD line recently crossed above the signal line, marking the beginning of an uptrend. If the indicator crosses into the positive region (above the mean line), Bitcoin will gain traction to trade above the crucial $60,000 level.

Note that crossing above $60,000 would spur a massive bullish signal, which may trigger huge buy orders amid heightened speculation for gains closing the gap to $70,000.

Read More: Why Bitcoin Will Likely Hit An All-Time High In 2021

Ethereum Fights to Secure Uptrend Above $2,000

Ether, like Bitcoin, has broken out of a descending parallel channel. However, bulls face immense resistance at $2,100.  At the time of writing, ETH trades at $2,073 amid a developing bearish trend. Bulls must ensure that the price does not retreat into the channel. Therefore, holding above the 100 Simple Moving Average (SMA) should be a priority.

The least resistance path has validated to the upside by the MACD, as illustrated on the four-hour chart. As the MACD line increases the signal line's divergence, Ethereum gains momentum. A daily close above $2,100 could see Ether make a giant stride toward $2,500 as more buy orders are triggered. 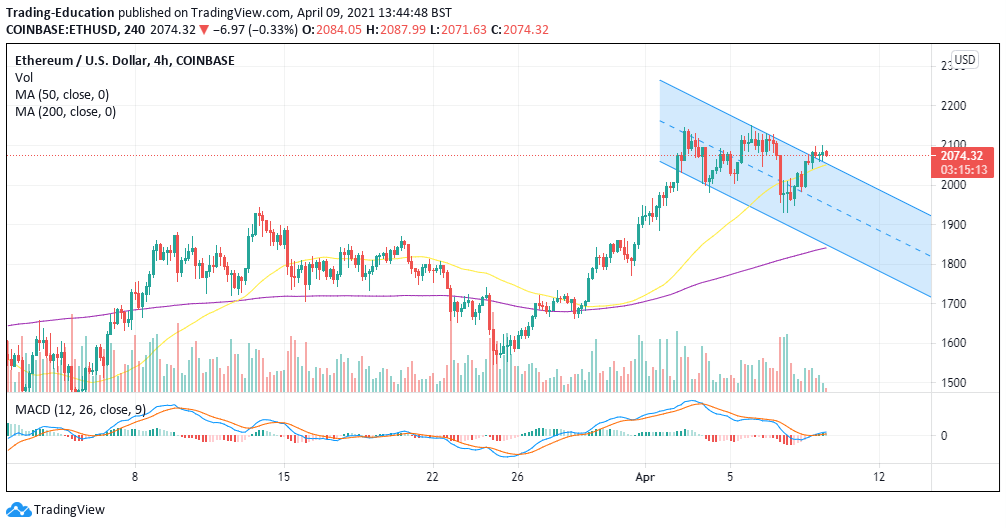 Check Out: What Will Ethereum be Worth in 10 Years?

Ripple has been a topic in the cryptocurrency industry this week, whereby XRP was elevated to the fourth spot by market capitalization after the blockchain start-up scored a win against the United States SEC. Ripple's lawyers were granted access to the SEC's documents on Bitcoin and Ethereum. They will determine the regulator's process to arrive at the categorization that makes XRP a security token.

As discussed earlier, the case's development put the SEC (prosecutor) on trial. If SEC fails to prove XRP is a security, Ripple Lab's and the entire cryptocurrency would claim victory. This case could be used as precedence in similar situations in the future.

In the meantime, XRP is trading at $1.01 amid the battles to secure higher support. The weekly chart reveals the formation of an inverted head-and-shoulders (H&S) pattern. This is a highly bullish pattern that could elevate XRP to highs of $1.47. 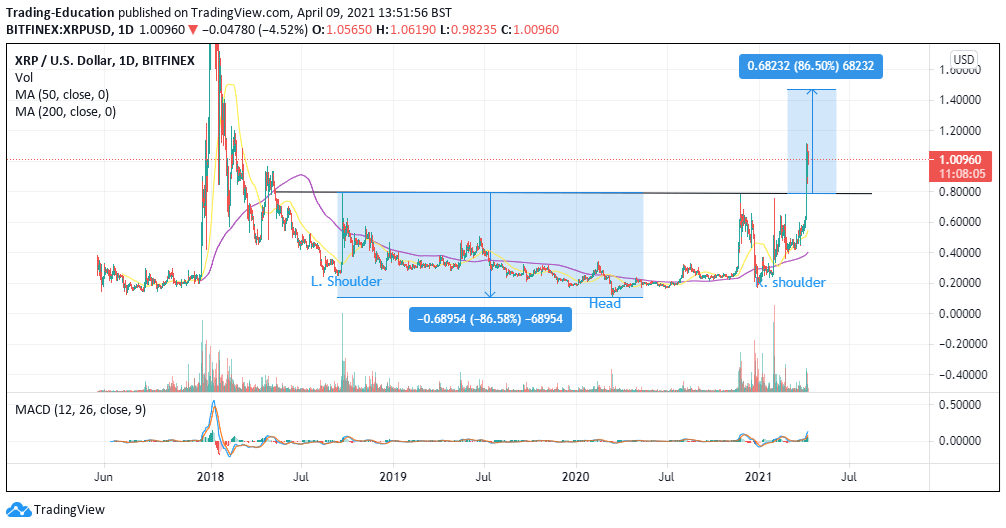 The weekly H&S pattern is extremely bullish but often is not confirmed. Therefore, traders must be cautious while incorporating this pattern. On the flip side, correction under $1 would prompt massive sell orders. If support at $0.85 is not affirmed, XRP may drop further toward $0.6 and $0.4, respectively.

BTC
XRP
ETH
Top Brokers in
All Regulated Brokers
67% of retail clients lose money when trading CFDs with this provider.