Bitcoin is in the red after an overnight pullback from October highs close to $58,000. The pioneer cryptocurrency is currently holding slightly above $55,000 amid a growing risk of negative volatility.

While Bitcoin struggles to find a substantial footing before resuming the uptrend to $60,000, Russia, through the Deputy Finance Minister, said that it has no plans of banning Bitcoin like China.

The above report comes amid a considerable growth in the Bitcoin hash rate coming from the country. According to CCAF, Russia accounted for 11% of the total BTC mining hash rate by the end of August. The increase is directly linked to the crackdown in China and has seen retail energy consumption in the Irkutsk area rise by 159% from the levels seen in 2020. 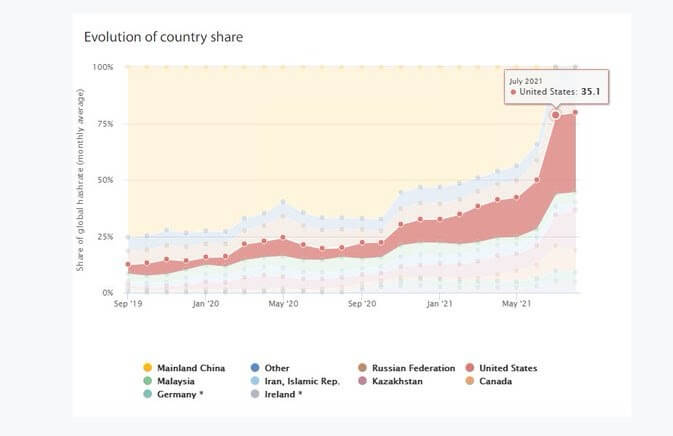 Meanwhile, data from DefiLlama, the total value locked across all decentralized finance platforms has surpassed $200 billion, a figure that has doubled since the end of June. Intriguingly, Ethereum TVL has dwindled from 98%, as observed in January, to 68%.

Bitcoin is currently digging into the green demand zone, as highlighted in the chart. As mentioned, the largest cryptocurrency has retraced from near $58,000 to seeking support at $55,000.

If the selling pressure surmounts the demand zone, we can anticipate Bitcoin to retreat further. The most natural short-term support lies at $52,000, while with extended losses, bulls would be forced to look further down around $49,000.

Traders should be on the lookout for a sell signal from the MACD. As the 12-day EMA crossed below the 26-day EMA, the odds will favor the sellers.

On the upside, holding above $55,000 will change the perspective in the bulls’ favor, allowing for the resumption of the uptrend predicted to have the potential to hit the all-time high.

Ethereum has, like Bitcoin, lost some ground from its October highs of $3,682. The gigantic smart contracts cryptocurrency has in the last two days struggled to stay above $3,500, especially with its upside capped by the supply zone in red.

On the downside, the bulls seem to be putting up a ferocious fight at the 50-day SMA. Buyers understand that losing this support might work against them. Note that the next formidable support lies around $3,100. Declines to this level could quickly escalate to the demand zone in green.

Therefore, keeping Ether above the 50-day SMA is of paramount importance because bulls do not have to work very hard to turn the tables around and push for gains above $3,600 and toward $4,000.

Check Out: How to Make (or Lose) Money with Ethereum (ETH)?

Ripple’s Estranged Bulls On Verge Of Giving Up Control

Ripple continues to lose traction after a recent rejection from $1.2. As reported earlier, the trading at $1.1 pitted bulls against the bears in an intense tug of war. With the support lost and XRP holding on to the 50-day SMA, declines to $1 could quickly develop.

The next formidable support after the 50 SMA is the 200-day SMA at $1. Here, higher congestion of buyers is expected to boost the bulls in their quest for gains above $1.4.

Meanwhile, all is not lost for the bulls, bearing in mind the MACD still has a minor buy signal. Buyers must rally behind XRP to avert a call to sell, likely to contribute to the hovering bearish pressure.