The cryptocurrency market has been stagnant for another week, with most assets stuck in consolidation. Bitcoin price has inclined to the south following a rejection from $36,000. At the time of writing, the bellwether cryptocurrency is pivotal at $33,000, but losses to $30,000 still linger.

As the first week of July gains traction, Ethereum holders have been on an exodus, decreasing the number of tokens held on exchange platforms. According to on-chain data by Santiment, the Ethereum held on exchanges is at its lowest ratio since November 2020. Moreover, the balance has dropped under 18% of the total Ether supply for the first time in 31 months. Note that such a reduction lowers the risk of a significant selloff. 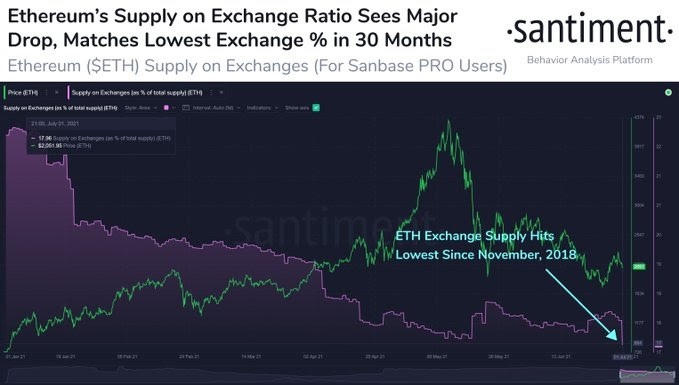 On the other hand, analysts with Wall Street investment bank JP Morgan believe that staking on Ethereum 2.0 will take off as a source of revenue for institutions and retail investors. This week's report says that staking currently generates $9 billion worth of yearly revenue in the crypto industry. The earnings will likely increase as more energy-efficient blockchains emerge.

Why could Ethereum price dump some more before another recovery attempt?

Ethereum price trades at $2,050 while stuck between two critical levels; the 50 Simple Moving Average (SMA) support and the 100 SMA resistance. Losing the immediate support may be detrimental for Ether's uptrend. Moreover, the bearish leg may stretch to $1,930 before bulls regroup for another liftoff.

The Relative Strength Index (RSI) movement toward the oversold area adds credence to the bearish narrative. However, if support at that 50 SMA holds and Ethereum price closes the day above the 100 SMA, the uptrend back to $2,300 (weekly resistance) may resume.

Bitcoin price ushers in the weekend session in the red

Bitcoin has been struggling to gain ground back to $36,000 for several days now. Cracking the former support at $34,000 opened the Pandora box as more sell orders were triggered.

At the time of writing, the flagship cryptocurrency can barely hold above $33,000, while the least resistance path seems downward. The Moving Average Convergence Divergence (MACD) has a bearish outlook, which occurred after the 12-day EMA dipped under the 26-day EMA. As the MACD crosses below the mean line (0.00), Bitcoin will experience an overhead surge pressure as declines stretch toward $30,000.

If the buyers' congestion at $32,000 holds, the downtrend to $30,000 will be invalidated. Perhaps, bulls will regain strength to launch another recovery attempt toward $36,000.

Ripple price uptrend in jeopardy amid calls to $0.55

Ripple price has not secured formidable support after the rejection from levels above $0.7. The SMA on the four-hour chart is an immediate resistance, adding props to the pessimistic outlook.

On the downside, the bearish leg seems to be gaining traction toward $0.6. A break under this level may not rest until XRP test the following anchor at $0.55. The MACD reinforces the bearish outlook as it moves to cross below the mean line (0.00).

Meanwhile, the only way to avert the losses is to resume the uptrend and settle above the 100 SMA near $0.7. Here, bulls will have the ability to focus on growth above $0.8 and toward $0.88 during the weekend session.

Check Out: How Much Will XRP Be Worth In The Next 5 Years?