The cryptocurrency market is mainly red on Wednesday during the European session, apart from some selected altcoins posting double-digit gains such as Ethereum Classic and Waves. Almost all the top ten crypto assets are posting single-digit losses.

According to on-chain data by Santiment, a leading behavioural analytics platform, Bitcoin’s social sentiment on Twitter has continued to flip bearish despite the recovery to $36,000. The chart below shows that BTC is still at near historical crowd negative levels. Situations like these may allow investors to get in while traders watch out for lower prices. 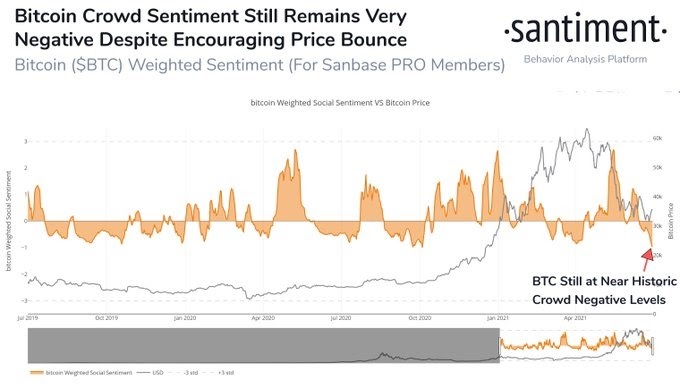 The 12-hour chart shows Bitcoin having lost the 50 Simple Moving Average (SMA) support. As overhead pressure rises, bears are gazing toward $30,000. Therefore, if short-term support at $34,000 fails to hold, massive sell orders may be triggered.

On the other hand, the Moving Average Convergence Divergence (MACD) still has a bullish impulse. As the trend momentum indicator crosses above the zero line, bulls will likely tighten their grip, thus pulling Bitcoin above $36,000 while aiming for $40,000.

Ethereum price failed to sustain the V-shaped recovery discussed on Tuesday. A resistance at $2,250, highlighted by the 50 Simple Moving Average (SMA), cut short the uptrend. Meanwhile, Ether trades at $2,155 amid an intense tug of war between the bears and the bulls.

The MACD on the 12-hour chart suggests that buyers have the upper hand. However, crossing into the positive territory will validate the uptrend’s resumption. Moreover, support at $2,100 must hold to ensure that the bulls’ effort goes toward breaking barriers and not playing defense tactics.

According to IntoTheBlock, Ethereum’s on-chain activity is gaining traction. The number of on-chain transactions recently hit 1.38 million, a figure not seen since May 20. These transactions attracted an aggregate dollar value of $15.04 billion, suggesting that demand is rising and the uptrend could be sustainable.

Ethereum on-chain activity on the rise

Don't Miss: Why Ethereum Will Skyrocket

Ripple price brushed shoulders with $0.72 but failed to sustain gains to hit our prediction at $0.85. A correction followed with XRP exploring levels under $0.7 and seeking support at $0.66.

At the time of writing, Ripple trades at $0.68 amid a heated confrontation between the sellers and the buyers. Despite the correction, Ripple has numerous bullish signals, starting with the MACD closing the gap to the zero line. Note that crossing into the positive region will validate the bullish signal.

The same timeframe illustrates a falling wedge. This is a highly bullish technical pattern that may see the downtrend flip bullish with a 50% breakout target to $1.02. As the pattern narrows, bears are expected to weaken, and bulls prepare to take control. The pattern confirms when the price cracks the upper trend line resistance before the two lines meet.

Read Also: Why Ripple Is Going To Explode