Declines in the cryptocurrency market have become a norm, with assets finding it difficult to hold even the smallest of the uptrends. Bitcoin closed last week in losses after testing support at $31,000. A minor upswing during the weekend session allowed bulls to take control, boosting BTC toward $32,500 briefly. However, the new week’s trading opened amid another dip back to $31,000.

The rest of the market is mainly red, whereby crypto assets such as Ethereum, Dogecoin, and Polkadot are posting 5%, 6.8%, and 6.4% losses, respectively. It is imperative to say that we are in a downtrend and perhaps seeking a bottom before another bull cycle comes into the picture.

Bitcoin Price Bearish From All Perspectives

Following a weekly loss of 7.8%, Bitcoin seems to have renewed the downtrend. Support at $31,000 will probably not be the last stop, and the search for a bottom will continue in the near term.

According to Santiment’s weekly report, “Bitcoin’s social data is showing a continuous drop-off in retail interest as well as expectedly low spirits about the coin’s future.” In addition to that, On-chain activity has continued to dwindle with another dip in the number of addresses interacting with BTC. A 28% loss since Monday last week saw active addresses hit levels below 600,000 for the third day since the year started. 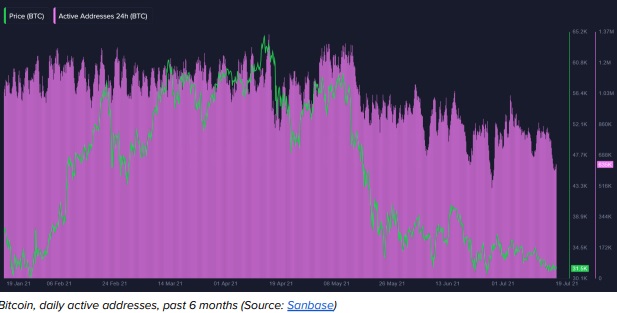 From a technical perspective, Bitcoin is in the hands of the bears. The relative Strength Index (RSI) reinforces the growing sellers’ aggression as it dips toward the oversold region.

Meanwhile, a daily close below $31,000 could call more sellers into the market as investors grapple with panic. Perhaps a drop to $27,000 will mark the last mile on the downside, allowing bulls to ultimately control the price action, catapulting Bitcoin above $40,000.

Ethereum has been dealing with losses under $2,000 since last week. Support at $1,850 keeps bearish advances in check, ensuring that losses do not sink further. However, the RSI shows that bears are in control and could for another dip. Note that a daily close below $1,850 may validate the hovering selling pressure.

Subsequently, a death cross pattern has recently come into the picture after the 50 Simple Moving Average (SMA) crossed below the 200 SMA and the 100 SMA. This technical pattern points at the downtrend gaining traction and Ethereum consolidating at a lower price level.

On the upside, a daily close above $1,850 will pave the way for gains eyeing $2,000. Trading above this level and the 50 SMA may trigger another upswing with bulls completely controlling the price for an ultimate recovery to $2,400 and $3,000, respectively.

Check Out: Buy Ethereum At $2k, Buy Some More If It Falls Further

Why Ripple Must Hold This Crucial Support

The cross-border money transfer token has been on a downtrend since June 30, taking the shape of a descending parallel pattern. Currently, the middle boundary holds the price firmly and could give bulls balance and an opportunity to work on an upswing toward $0.6.

At the time of writing, Ripple trades at $0.56 after losing the anchor at $0.58. If the channel’s middle-range fails to hold, we can expect Ripple to make another swing toward $0.5. The lower edge of the channel is in line to offer the much-needed support.

The MACD is about to present another sell signal, adding credibility to the downtrend. This call to sell will manifest as the 12-day EMA crosses below the 26-day EMA.