The cryptocurrency market displays mixed messages during the European session on Tuesday. Some selected altcoins fly the bullish pattern higher above the horizon, such as Dogecoin, with a 24% gain in 24 hours.

The meme coin has hit another milestone (new record high) after listing on eToro, a popular trading platform with millions of users. Other crypto assets performing incredibly well include Litecoin (up 11%), THORChain (up 18%), and Dash (up 11%).

Bitcoin Uptrend Intact Despite Retreat to $55,000

Bitcoin extended the price action over the weekend, where bulls closed the gap toward $60,000. However, the barrier at $59,000 thwarted the investors' hope for gains back to $60,000. Moreover, the flagship cryptocurrency corrected back to $55,000 before the ongoing recovery ensued.

At the time of writing, Bitcoin trades at $56,000 as bulls battle to sustain the uptrend back to $60,000. The four-hour chart highlights an ascending parallel channel. The pattern's lower limit functions as the immediate support, but a break above the middle boundary resistance might trigger gains beyond $60,000.

The Relative Strength Index (RSI) seems to validate the growing bullish influence. Movement above the midline would play a key role in encouraging more investors to join the market from the sidelines amid rising speculation for higher price levels.

Ether has sustained the ongoing uptrend for several weeks now. The break above $3,000 called out more investors to join the market amid upscaling hope for gains past $4,000.

At the time of writing, Ethereum trades at $3,470 as bulls work their way for a break past $3,500. The RSI adds credence to the bullish outlook, ignoring the overbought conditions. Note that higher support will ensure that ETH assumes market stability.

The same bullish impulse emanates from the SuperTrend indicator on the four-hour chart. This indicator still has a buy signal, implying that the journey to new milestones is unstoppable. Ethereum is bound to rise higher and perhaps close the gap heading to $4,000 if the technical picture remains intact or improves. 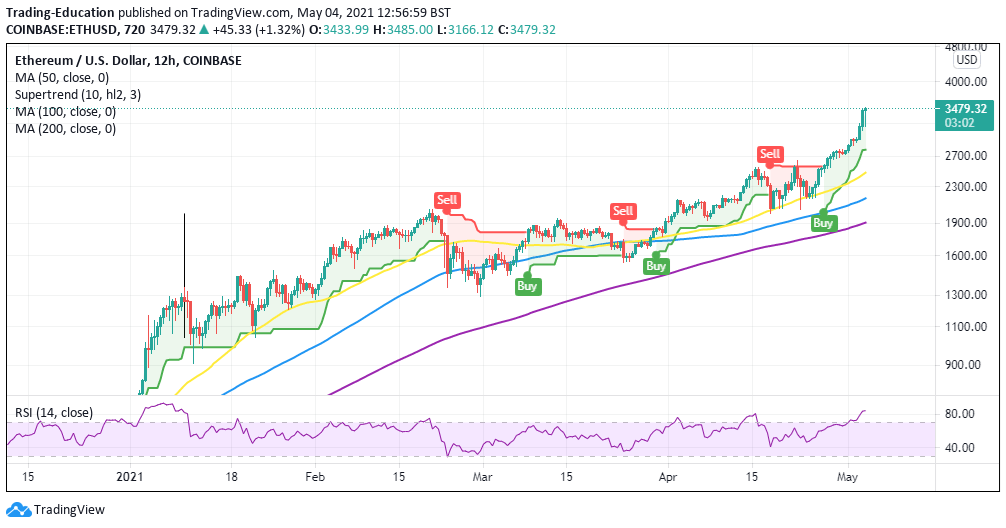 Ripple Seeks Higher Support in a Bid to Secure the Uptrend

The cross-border value transfer token has recently corrected from the resistance established at $1.6. Investors hoped to see XRP catapulted beyond $2, but at the time of writing, the token has a market value of $1.46.

Immediately on the downside, the 50 Simple Moving Average (SMA) provides support in conjunction with the ascending triangle's hypotenuse. If this support holds, Ripple bulls will be allowed to finesse their mission to $2.

It is essential to keep in mind the ascending triangle, an extremely bullish continuation pattern. However, the price must strike above the x-axis before the trend lines meet to validate the triangle and validate the upswing targeting $2.4. 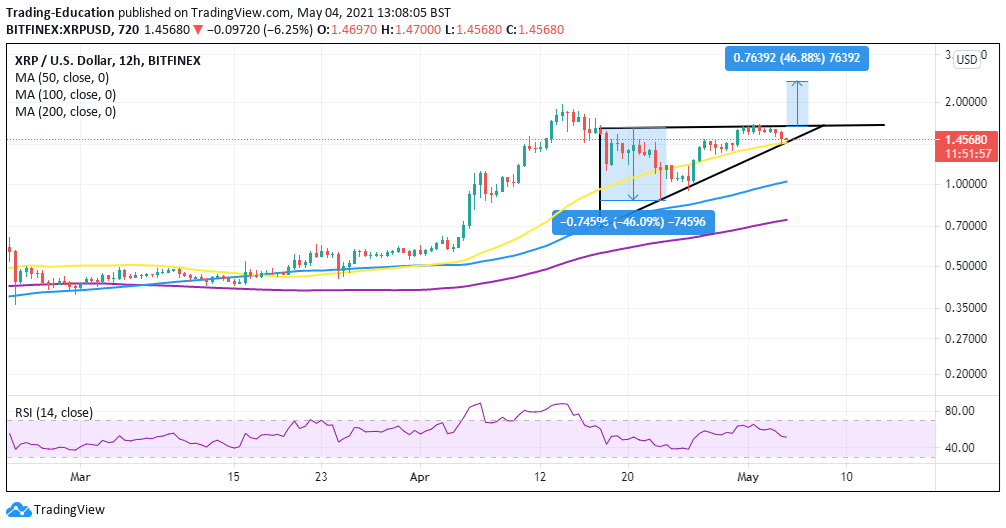 The overhead pressure following the rejection from $1.6 cannot be ignored on the downside, as highlighted by the RSI's move toward the midline. If the down leg extends to the oversold region, Ripple may freefall to seek support at the 100 SMA around $1 and the 200 SMA near $0.7.