A wait-and-see mode appears to have crept into the crypto space in the first week of March, thus far, as investors refrain from placing any directional bets, leaving the digital assets in familiar ranges.

A bearish wave gripped the cryptocurrencies last week, as most assets suffered amid a meltdown in Bitcoin, the granddaddy of the crypto world. Although large inflow from wallets near $46,000 saved the day for the BTC bulls.

Broader market optimism on the US $1.9 trillion stimulus passage by the House of Representatives weighed on the haven demand for the US dollar, helping put a floor under BTC/USD.  Meanwhile, Citigroup’s bullish view on the No.1 coin combined with the news of Goldman Sachs re-opening its cryptocurrencies desk also cushioned the downside.

So far this week, the performance of the top two most widely traded crypto coins, Bitcoin and Ethereum, has been lacklustre. According to the latest on-chain metrics data, the transaction value and fees for both these coins have dropped sharply by 70%. Markets await a strong catalyst for a sustained break in either direction.

However, odds remain in favour of another upswing, as whales enter a period of accumulation, especially the ones with holding more than 1,000. Historically, when these BTC whales’ holdings have risen above 43% of the total supply, the flagship cryptocurrency has witnessed a fresh leg higher. At the press time, the whales with 1000 coins contribute to about 42.50% of the total available coins in the market.

Let’s see how their outlook appears on the technical graphs.

The pioneer digital currency, Bitcoin is clinging onto the critical 21-day simple moving average (DMA), now at $50,000 for the third straight day this Thursday. The coin delivered a daily closing above that level a day before, offering some fresh signs of a continued recovery.

Although the BTC sellers continue to lurk at the powerful $52,000 mark, weakening the bullish momentum. That hurdle is formed by the confluence of the psychological level and the falling trendline resistance of a potential symmetrical triangle on the daily sticks.

Note that the price has been forming higher highs and lower lows on the said timeframe, carving out a symmetrical triangle formation, with an upside break likely to be confirmed on a daily closing above the key $52,000 level.

The 14-day Relative Strength Index (RSI) has turned south, now trading at 53.92, suggesting that the bulls are lacking the follow-through upside bias.

Therefore, a drop towards the rising trendline support at $45,100 could be in the offing if the bearish pressures intensify.

A breach of the latter on a daily closing basis could validate a triangle breakdown, opening floors for a test of the immediate support located at $42,283, the upward-sloping 50-DMA. 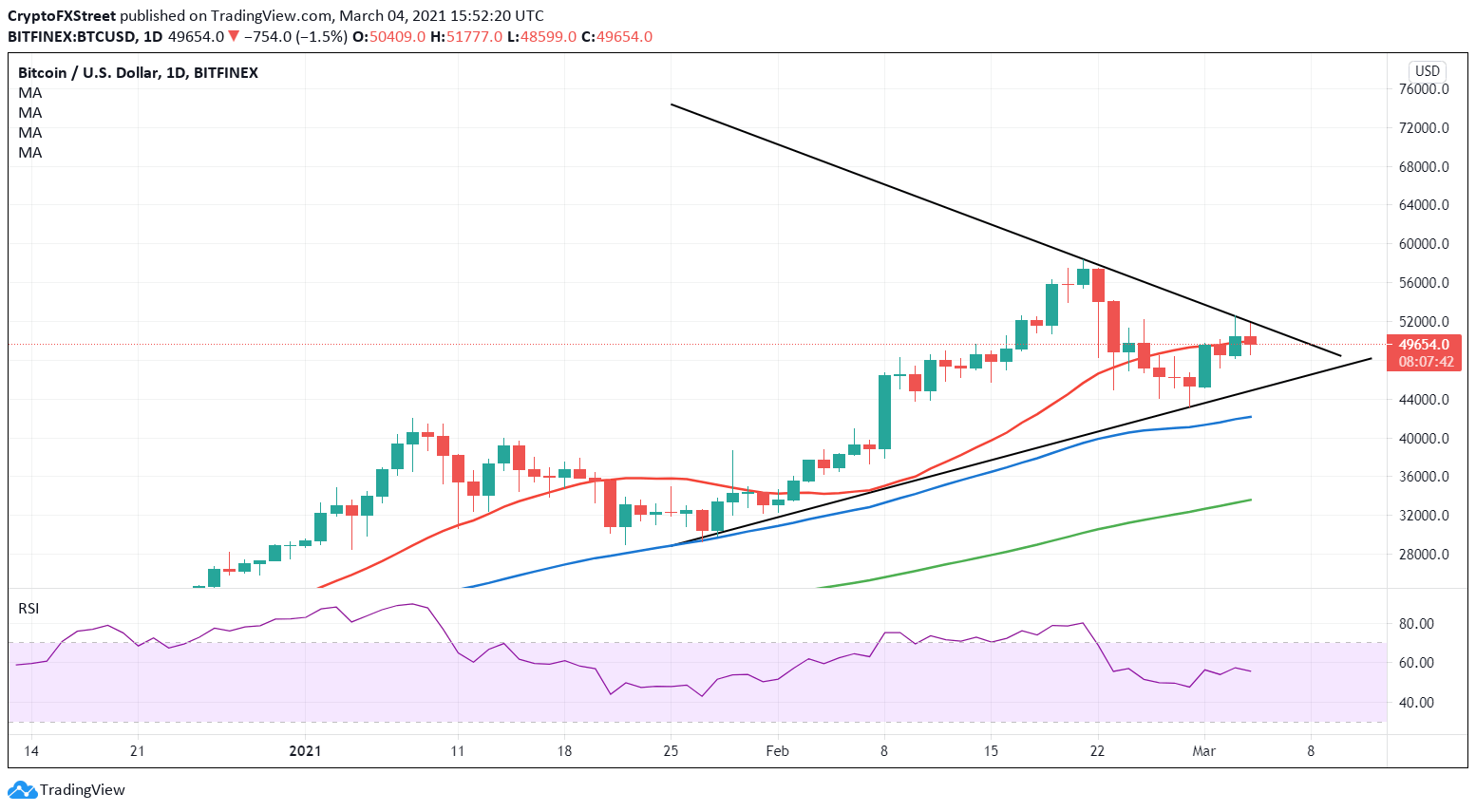 On the flip side, acceptance above the $52,000 level could revive the bullish momentum, calling for a test of the record highs at $58,367 once again.

Read Also: Could Bitcoin Be A Millionaire-Maker?

Ethereum is seeing its recovery momentum fizzling amid a tepid tone across the crypto board. The world’s second most favourite digital asset clings on to Wednesday’s gains while trading above the all-important 50-DMA.

The bulls appear to have found a foothold above the 50-DMA resistance now support after ETH/USD closed Wednesday in the green above that level.

However, the ETH buyers are facing stiff resistance at the critical psychological level at $1700, which coincides with the bearish 21-DMA. Note that the price hasn’t closed above that barrier since February 22.

Therefore, recapturing the abovementioned level is critical to fuelling another upswing towards the $2000 mark. The next significant cap awaits at the two-month-old rising trendline resistance at $2370. 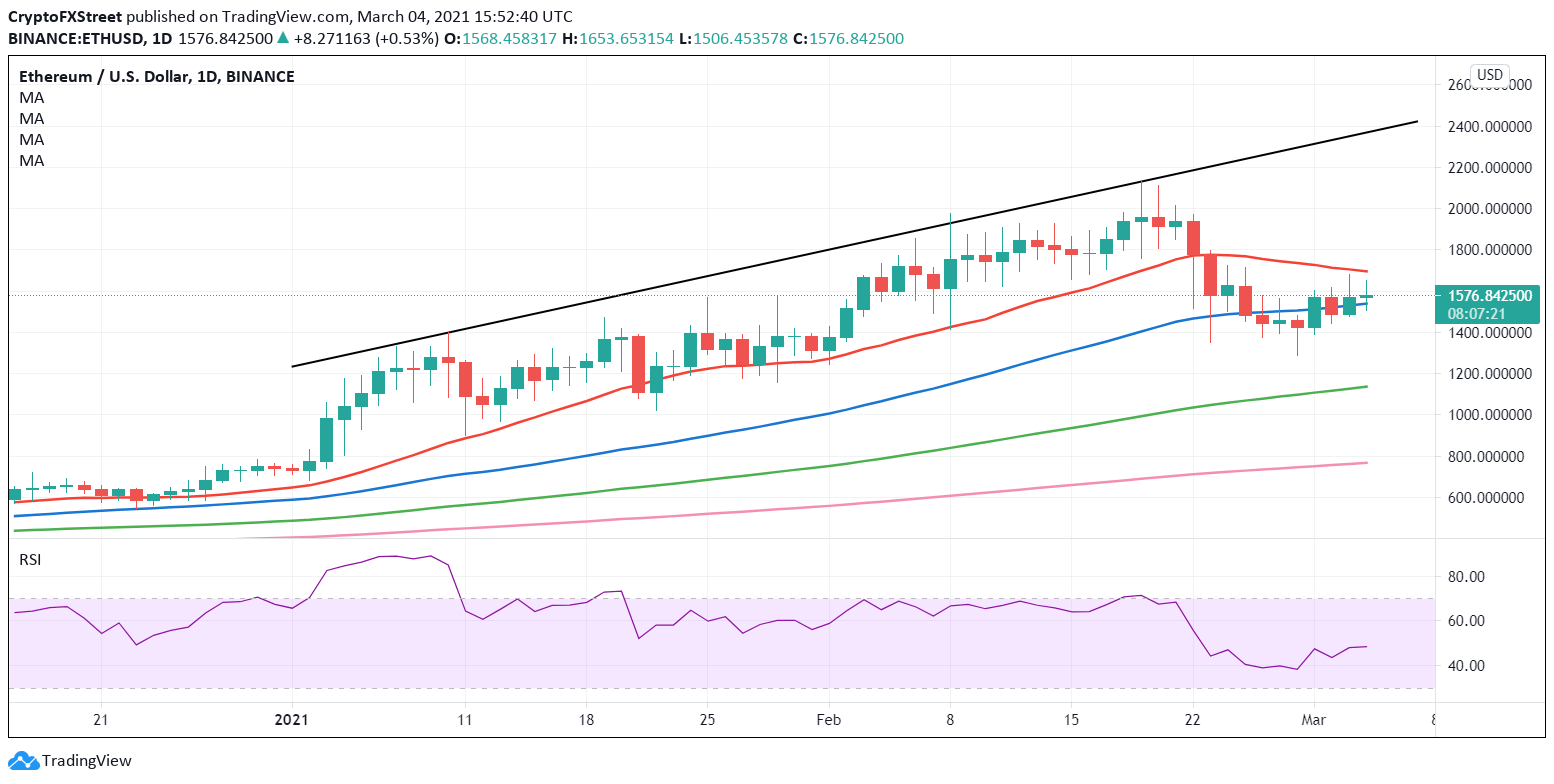 The 14-day RSI trades flat below the midline, currently at 47.80, keeping the bearish bias intact.

At the time of writing, ETH/USD trades modestly flat at $1570, forming a doji candlestick on the daily chart. The doji suggests a lack of clear directional bias in the near-term while prompting a bull-bear tug-of-war.

Don't Miss: Why Ethereum Might Be a Good Investment in 2021?

Ripple readies for a massive upswing once it clears $0.50 barrier

After seeing two consecutive days of gains, the XRP bulls are taking a breather on Thursday, prepping up for a big break to the upside. The no.7 coin remains trapped in familiar ranges for the seventh straight session, holding onto the critical support around $0.4150.

That level is the convergence of the bullish 50-DMA and the rising trendline support while the XRP/USD continues to traverse within a potential symmetrical triangle formation since the end of January.

The path of least resistance for the Ripple appears to the north, with only one fierce barrier needed to be crossed in order to test the triangle resistance at $0.65. That critical hurdle is placed at $0.50, the horizontal 21-DMA.

The 14-day RSI is looking to reclaim the 50 level, adding credence to a potential move northwards. 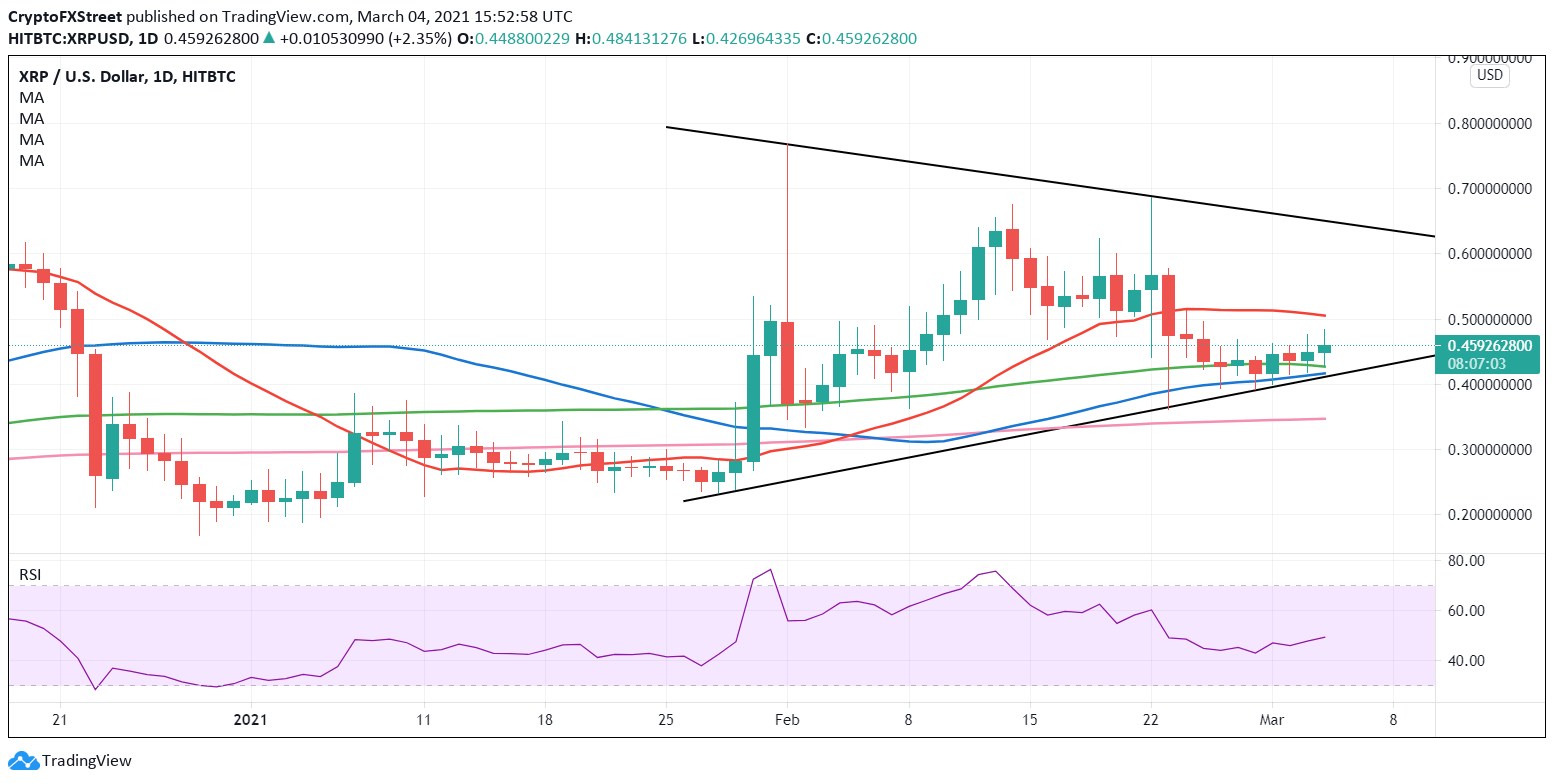 Alternatively, should the XRP price yield a daily closing below the aforesaid key support at $0.4150, the symmetrical triangle breakdown would be confirmed.

The sellers could then aim for the next downside target at $0.3490, where the crucial 200-DMA lies.

All in all, the prospects for a bullish move appear more compelling, especially after week-long sideways trading in the spot.