Bitcoin remained at risk of a correction ever since the founder of Tesla Inc. and billionaire Elon Musk tweeted that its value ‘seems high’ last Saturday. The telling came into existence on Monday after the flagship currency eroded nearly $10,000 in a matter of minutes and hit a low of $46,700 on Coinbase before recapturing the $50,000 level.

US Treasury Secretary Janet Yellen’s comments on Bitcoin and digital assets, although emerged as the nemesis for Monday’s collapse. Yellen said that the granddaddy of the cryptocurrencies is extremely inefficient for conducting transactions. She warned people to beware, citing it as a highly speculative asset.

The world’s most dominant digital asset refreshed all-time-highs at 58,367 on Sunday, having topped $1 trillion in market capitalization. Both Ethereum and Ripple bore the brunt of the crash in Bitcoin in Monday’s American trading, although a quick comeback keeps the buyers hopeful.

The main question for the markets here is whether the record run across the crypto space remains intact or is a sign of a potential correction?

Bitcoin Corrects Before Resuming The Uptrend

After the crash, BTC/USD is not giving up its fight towards $60,000, as the sellers failed to find acceptance below the critical support around $46,900 levels. That level is the meeting point of the upward-sloping 21-day simple moving average (SMA) and the 61.8% Fibonacci Retracement (Fibo) level of the parabolic rise from January 22 to February 21.

So long as the abovementioned fierce support under $47K holds, the most favourite digital coin could keep its eyes on the record highs. 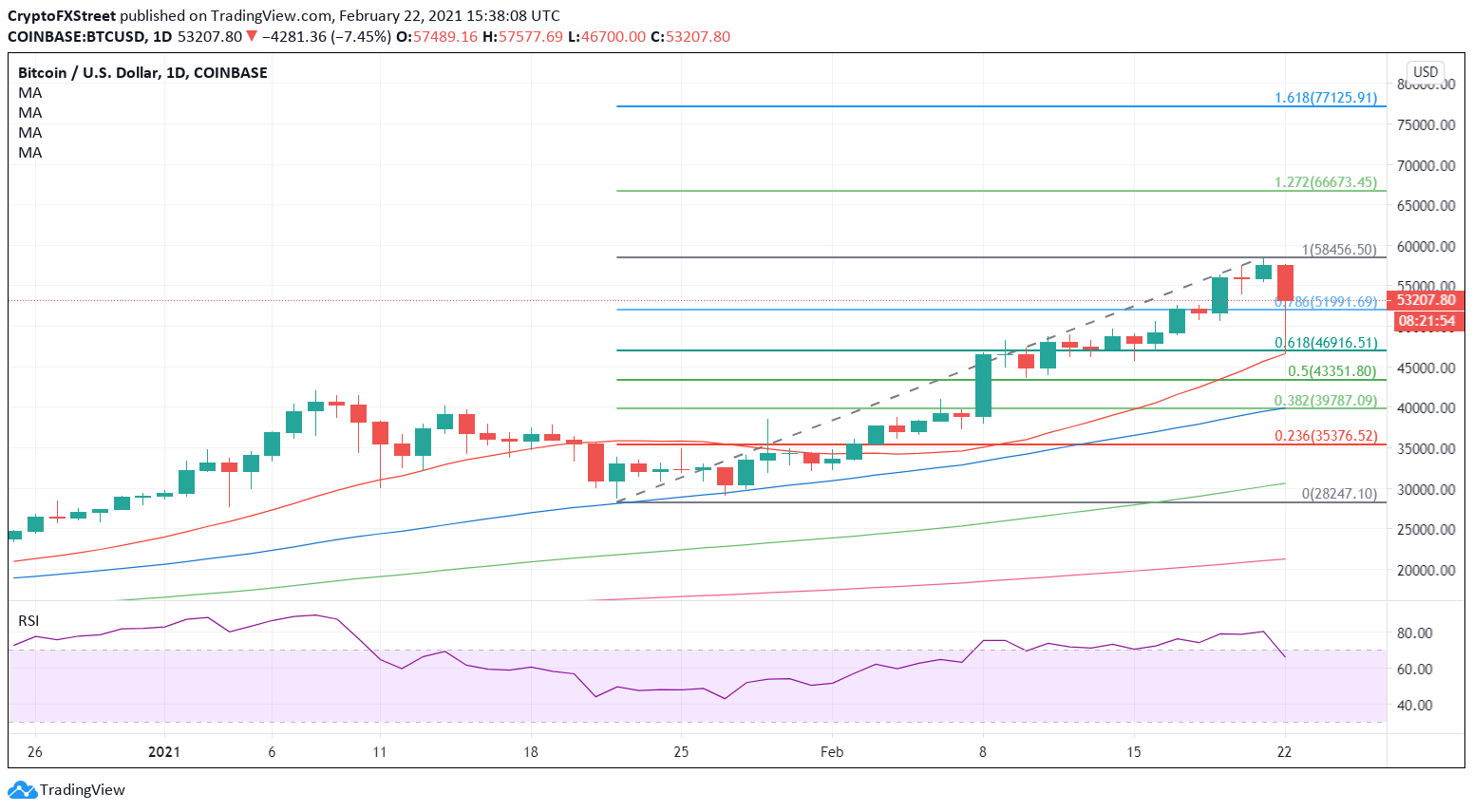 On the flip side, a deeper correction towards $39,800 levels cannot be ruled out if the latter gives way. At the point, the bullish 50-day SMA coincides with the 38.2% Fibo level.

However, with the 14-day Relative Strength Index (RSI) still trending above the midline around 65, the upside bias appears intact.

Ethereum On The Verge Of A Rising Wedge Breakdown

Ethereum, like Bitcoin, has embarked upon a corrective decline after clinching record highs near mid-$2000 on Saturday. The ETH price saw a flash crash to $1516 levels, although the buyers quickly regained control and drove the coin back on the $1700 handle.

The digital asset has recovered ground above the former stable support at $1,690, as suggested by the Global In/Out of the Money (GIOMA) model, where nearly 2 million addresses bought roughly 8.9 million ETH.

Despite the rebound, investors await a confirmation of a rising wedge bearish breakdown should the no. 2 coin close the 12-hour candlestick below the pattern support at $1800.

A sharp drop once again towards the bullish 100-SMA at $1463 could be in the offing on the pattern validation.

Further south, the confluence of the lowest point on the wedge and the bullish 200-SMA around $1030 would be on the sellers’ radars.

Note that the RSI has pierced through the midline and now approaches the oversold territory, reflective of the strengthening bearish bias. 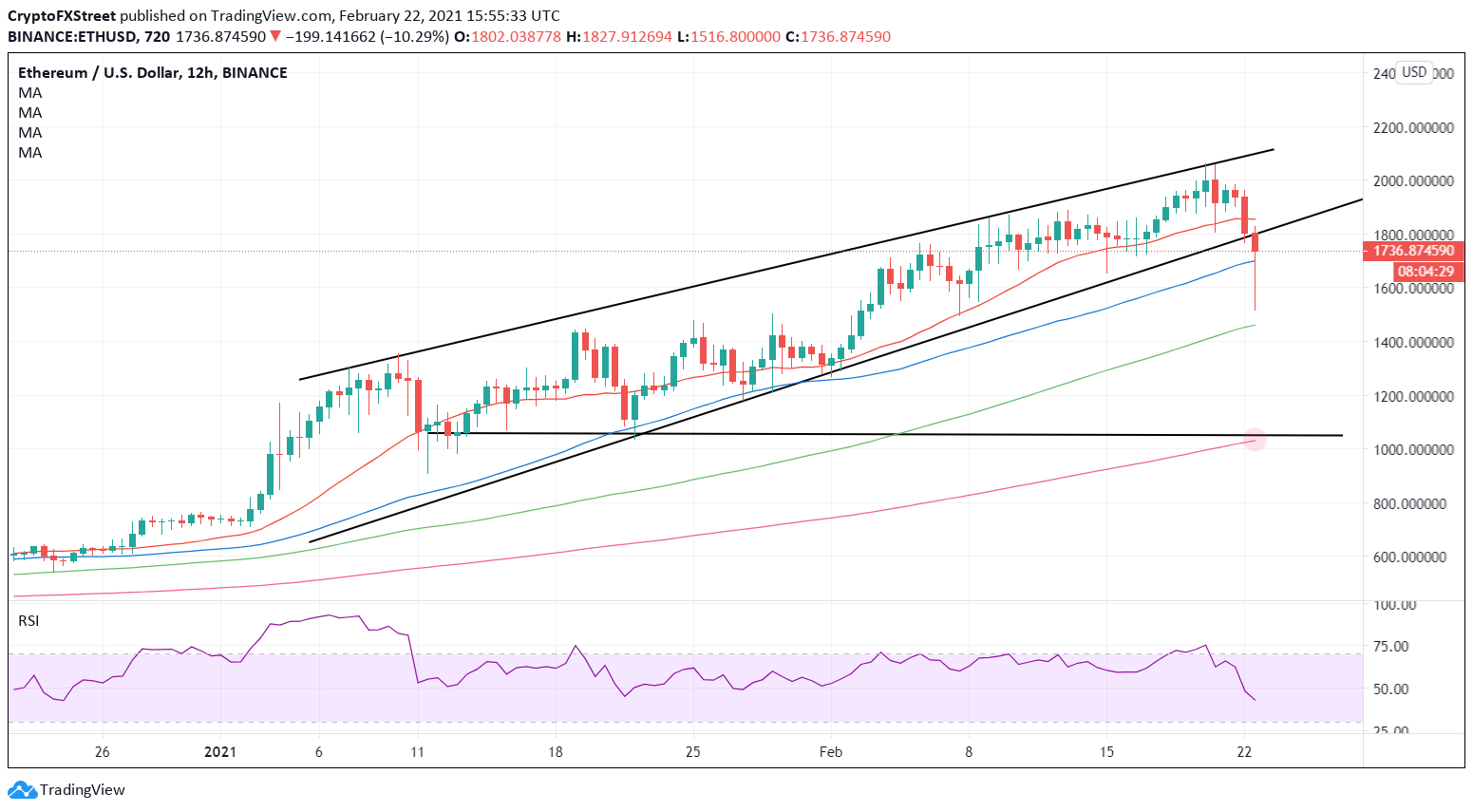 However, the latest news that Binance, the crypto exchange, has temporarily suspended withdrawals due to "high network congestion", could offer some temporary reprieve to the ETH bulls.

Read Also: Why Ethereum Might Be a Good Investment in 2021?

Ripple Holding Onto Critical Support While Within A Triangle

Despite witnessing wild swings in early American trading this Monday, Ripple has managed to defend a critical level at $0.4935, which is the convergence of the rising trendline support and the bullish 50-SMA on the 12-hour sticks.

It’s worth noting, that the seventh most widely traded crypto asset has been in a consolidative mode ever since it reached life-time highs at $0.76. The consolidation, with higher highs and lower lows on the said timeframe, has taken a shape of a symmetrical triangle.

A breakout in either direction could be on the cards, although a dense cluster of healthy support levels suggest that the outlook appears more constructive.

The XRP/USD pair is now battling the 21-SMA around $0.55. Acceptance above the latter is critical to unleashing further recovery gains after the price dipped to the aforesaid key support.

The next stop for the XRP bulls is seen at the triangle resistance of $0.6510. A 12-hour candlestick close above that level could yield a bullish breakout, opening doors for a retest of the parabolic highs. 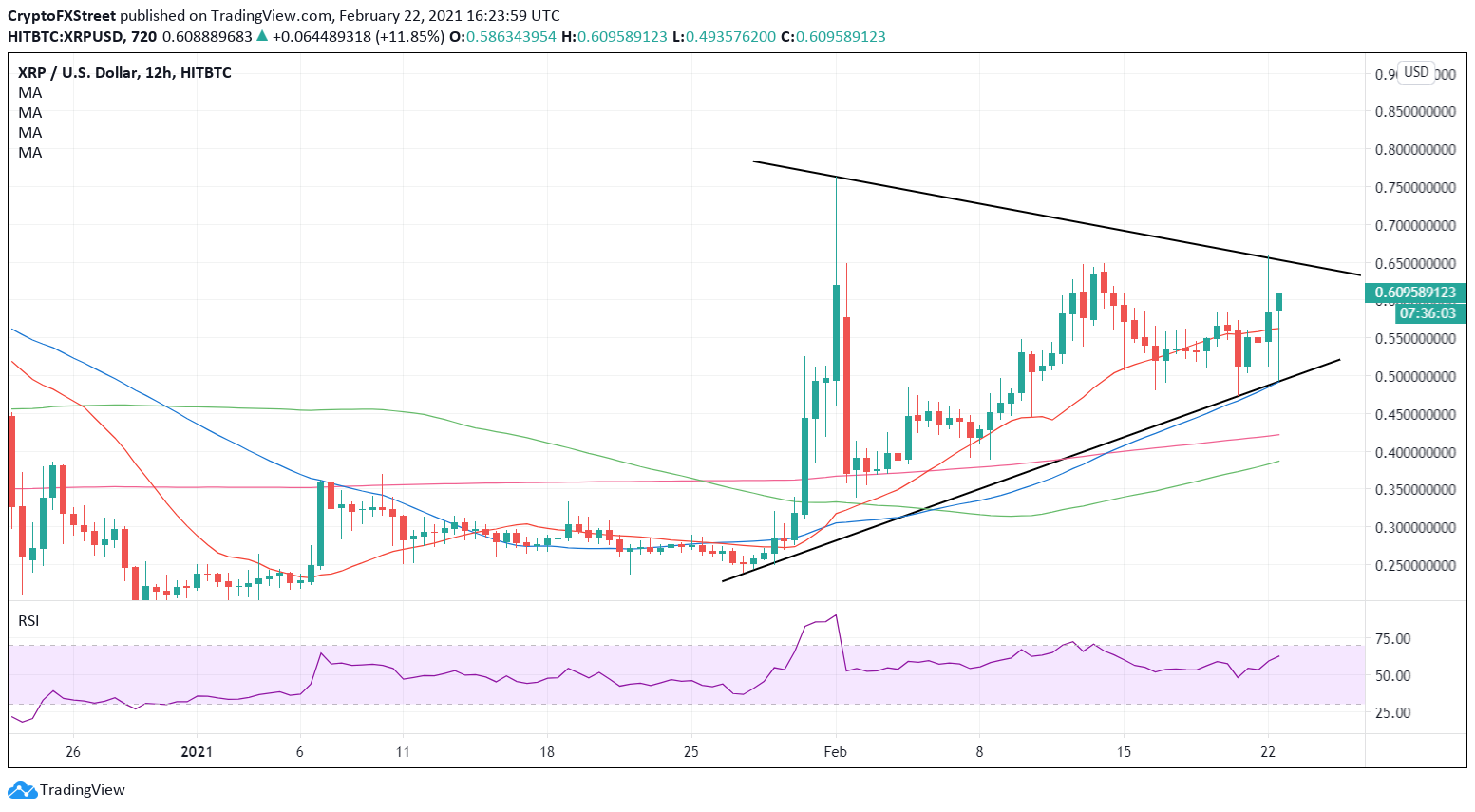 Alternatively, a triangle breakdown could be confirmed on a sustained move below the $0.4935 support.

Overall, XRP/USD’s path of least resistance appears to the upside, with the bullish RSI adding credence to the upbeat view. The RSI stands at 55.04, at the press time.

The price of Ripple XRP price has witnessed a 90% massive rally so far this month.