The cryptocurrency market is coming up to gasp for air after nearly two days of constant battering from bears. Bitcoin has brushed shoulders with $35,000 after testing support at $36,000.

Ethereum appears to be struggling with erasing the losses incurred in the last 24 hours. However, support at $2,400 allowed buyers to regain ground above $2,500. Similarly, Binance Coin lifted off support at $320 to trade near $360.

El Salvador is the first country in the world to accept Bitcoin as a legal tender. The largest cryptocurrency assumed the new status after Congress voted massively, approving the law.

According to President Nayib Bukele, the move is geared toward opening up the country for foreign investment, boosting financial inclusion, and creating more jobs. Bitcoin becomes the second legal tender in the country after the US Dollar. The move is likely to set precedence for other nations accepting it as a legal tender, thus clearing the skepticism due to the volatility.

Bitcoin begins the recovery journey to $40,000

The bellwether cryptocurrency trades around $35,000 at the time of writing. It is likely the news that a country accepted BTC as a legal currency for the first time triggered the ongoing uptrend. However, the biggest test is to hold above $35,000, thus setting the pace for the upswing toward $40,000.

Meanwhile, a bullish signal from the Moving Average Convergence Divergence (MACD) affirms the uptrend. Note that the MACD line (blue) crossed above the signal line. Closing the gap to the zero line would call more buyers into the market, thus adding pressure to the tailwind. 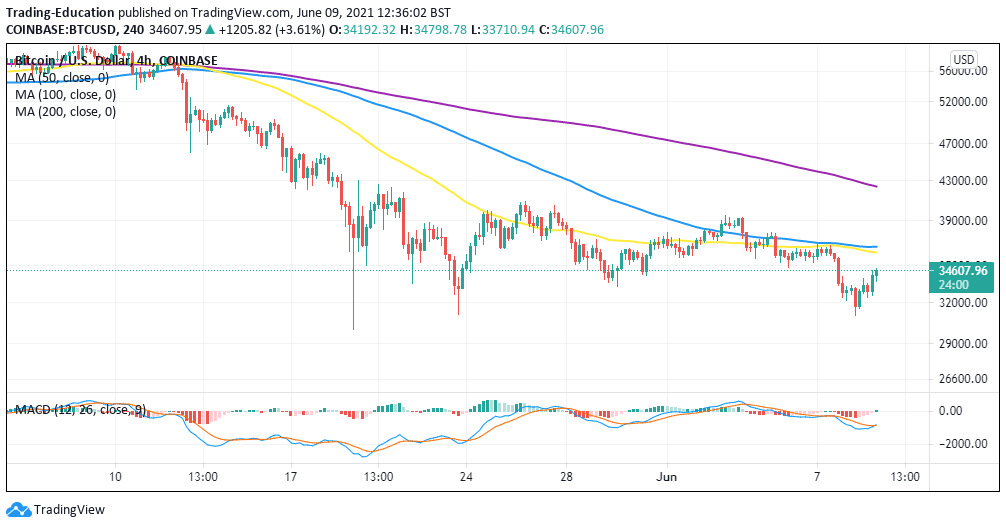 Check Out: Why Bitcoin Will Skyrocket

Ethereum has lifted from support at $2,400 and is currently trading above $2,500. The immediate upside has been capped at the 100 Simple Moving Average (SMA), and by extension, the 50 SMA. A break above these two levels could bring the pioneer smart contract token closer to the ascending triangle's x-axis resistance.

The ascending triangle is a highly bullish pattern. As Ethereum forms a higher low pattern, bulls become stronger. Eventually, a break above the x-axis could bolster Ether 34% above the triangle. A move of this magnitude will likely trigger massive buy orders, creating enough volume to support Ethereum's ultimate upswing to new all-time highs. 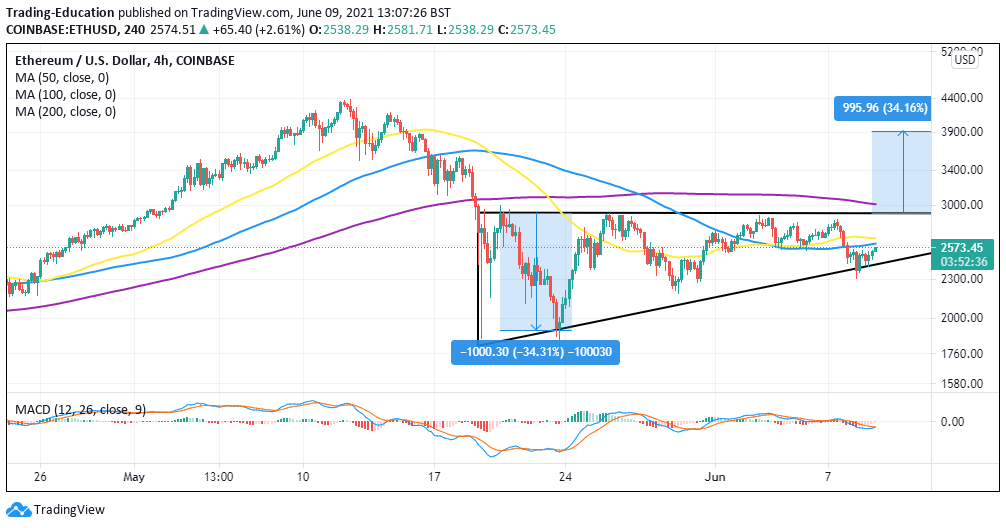 Don't Miss: Why This Is the Best Time to Buy Ethereum

Sideways price action is expected to take precedence in the upcoming sessions, especially with the MACD leveling beneath the zero lime. If the resistance at $0.9 is unshaken, XRP will remain pivotal between this seller congestion zone and the support at $0.8.

On the downside, bears will gain traction if the 50 SMA crosses under the 100 SAM, forming a death cross pattern. This formation is highly bearish and may add overhead pressure on the support between $0.78 and $0.8. If losses stretch further, Ripple will dive to the support in may at $0.65 before resuming the uptrend.